It's Sunny Side Down 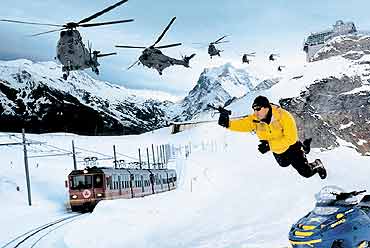 Even as Sunny tries to save India from the Pak nuke, he no longer crudely wrenches out handpumps to ram into the villains; rather, he has a stylish pow-wow with an awesome avalanche and jumps from a height of 11,000 ft at Jungfrau, Switzerland. That's when he's not rigging computers! Gadar's truck driver Tara Singh gets a slick makeover as super-spy Arun Khanna with the backing of some exotic locales, impossible stunts, outrageous chases and breathtaking cinematography. However, under the veneer of 007-like suspension of disbelief, the story still remains rooted in the very desi spy-thriller tradition, complete with the silly walkie-talkies and outdated hidden cameras. Our hero finds ingenious new ways to wipe out the villain: by shoving some green radioactive liquid down his throat. And, of course, there are some priceless gems from Shaktimaan, the writer: "ISI ke head hain? Apne head ka istmal kijiye." (You are the ISI head? Use our own head instead!) It's this goofy spirit that makes for a curiously entertaining film.

But it's not Gadar 2003. The wolf whistles aren't as shrill, the catcalls are less deafening, and the claps not as loud. The industry has already declared the Rs 55-crore film "thanda" (cold). "It's gone; it's a loser all over and doing average to reasonable business in Delhi-UP and Mumbai," says Film Information's Komal Nahata. "Indications in the first week are that it appears to be a flop," says trade analyst Amod Mehra. After a good start, The Hero started crashing mid-week: even in the holiday season, it could fetch only 84 per cent collection in Mumbai and 80 per cent in Delhi. Other important centres like Jaipur mustered 75 per cent, Nagpur 70 per cent, Indore 60 per cent and Calcutta 60 per cent. Only UP logged a good 90 per cent. Punjab, Sunny's biggest stronghold, too saw a crash of interest.