In their misplaced enthusiasm, many urban women have crossed the line and have turned into men themselves... 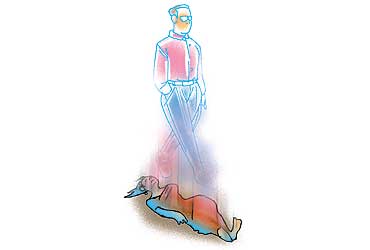 outlookindia.com
-0001-11-30T00:00:00+0553
These days, when I wish to see a woman, I have to take off from Mumbai and visit smaller, mofussil towns, as I am convinced that's where members of the so-called fairer sex now reside. In the larger cities, especially in the urban areas, they don't make them anymore.

All around me, I see men, men and more men.

And this disappearance of femininity is a very big price the ex-ladies (and indeed us 'original' men) have had to pay for insisting on being seen as equal to men on every single count. The bra-burning movement of the '60s that started in America (as most weird things do) and went on to spread like jungle fire in the rest of the world actually had all the right intentions; it was meant to improve the lives of women, fight against their oppression and abuse at the hands of beastly men and to get them to be independent individuals.

What has happened in reality is that instead of using the movement to rise and be on par with men in terms of jobs, opportunities etc, in their misplaced enthusiasm, many urban women have crossed the line and have turned into men themselves. The one big mistake these gender-benders made is that rather than demanding to be treated the same way as men, they have begun to behave the way men do.

In the process, losing out on that all-important thing called femininity, the essence of womanhood, the one factor that makes women so uniquely different from men, the one quality that men can never possess, the one thing so critical to the continuance of the world.

They want to pee in unisex loos. Because a separate toilet is a stinking sign of discrimination.

They are using abusive language at home, in the shopping plazas, on the streets, at the workplace. "What men can do, we can do ****ing better, okay?!"

They are smoking, guzzling, snorting harder for if they don't, they run the risk of being viewed as wimps.

They don't ever cry in movie halls, they do not spend time selecting the right shade of the sari (what's that rag?) and they certainly do none of the archaic stuff that soap-maker Ekta Kapoor believes they do.

They get upset when you show concern or care for them, take serious offence at being offered priority seats or being given safer jobs to do. (Recall the outrage when a Supreme Court judge let Arundhati Roy off with just a day in jail because 'she is a woman'. "How dare he make us feel weaker, the old..!")

They are placing career ahead of family, ambition ahead of happiness, work ahead of life, boss ahead of husband, deadlines ahead of sex.

They do not mind compromising on core values to get ahead in life, they see no harm in using their bodies to move a rung upwards, no dearie, the casting couch no longer needs solicitations.

They think of men who cannot cook as useless pieces of shit, men who can't do laundry as scumbags and men who cannot put babies to sleep as people who have no right to live. And then consider all these things too downmarket to be done by their own selves.

Women of today want to be macho, ironically that very 'quality' for which they detested and continue to detest men in the first place.

Dear gentlemen & gentlemen, it is my belief the erstwhile better-halves have made a grave error of judgement by considering femininity as a sign of weakness.

And while we 'men' can have the last laugh at being flattered by the women of today desperately wanting to be us, don't forget we all lose at the end of the day. For, the only people happy in this new-age androgynous world will be the gays.

There is no woman around. I see only men, men and more men.

(The author is the editor & publisher of advertising mag The Brief. anil@mid-day.com.)