‘It’s Not Worth Having Whistleblowers In India Today’

In the long term, whistle-blowing is much needed for our society, says brother of Satyendra Dubey, demanding protection for them. 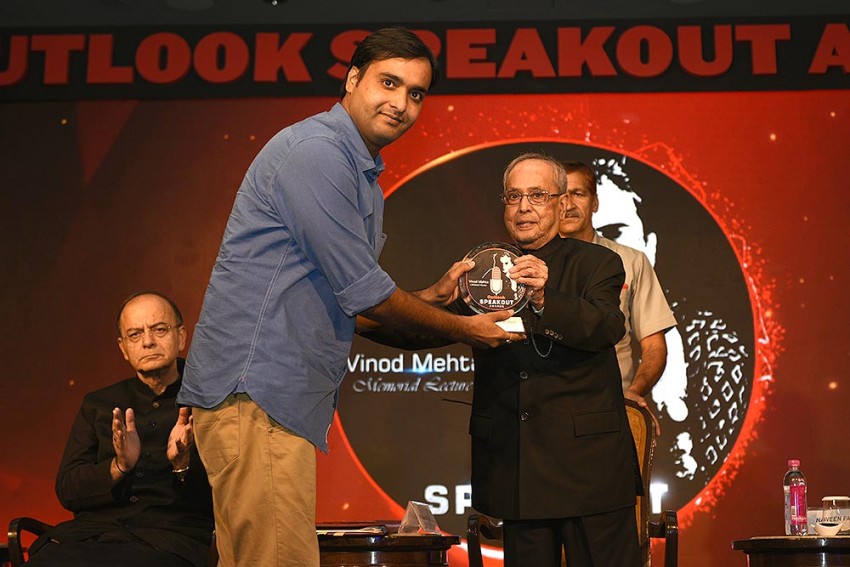 Point Of Honour
Dhananjay receiving the award on behalf of his brother, the late Satyendra Dubey
Photograph by Jitender Gupta
Ushinor Majumdar August 24, 2017 00:00 IST ‘It’s Not Worth Having Whistleblowers In India Today’ 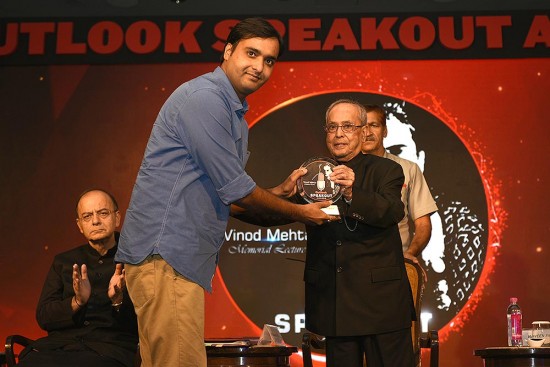 For many millennials, turning 30 is often a reminder to look back and assess the life goals one sought and achieved, failed to or is still striving for. If Satyendra Dubey had made a checklist on his 30th birthday, he would have ticked the following: jumped across the hurdles that come with a socio-economically modest background and got an education from IIT-Kanpur; served his country as an officer of the Indian Engineering Services (IES); and blew the lid off scams related to a section of the 14,000-km-long Golden Quadrilateral highways project. After trying to tackle the corruption himself, he had written to the PMO and sought ano­nymity. Dubey’s letter was leaked and his identity rev­ealed, leading to his murder in Gaya, Bihar, on Nov­ember 27, 2003, the very day he turned 30. His younger brot­her ­Dhananjay Dubey talks about the whistleblower and his ­murder. ­Excerpts from an interview with Ushinor Majumdar.

Can you give us an idea of your family background?

We are from a small farmer background on both the paternal and maternal sides. They make just enough to survive. My ­father was only 12 when my paternal grandfather died. He was thrust early into the role of the head of the family. Later, he took up a job in a sugar factory and also ran a medical store, ­often doing both.

What values did your parents insist on while you were growing up?

My father was a firm believer in hone­sty and truthfulness, despite his pove­rty. He was very strict with us. He would ‘discipline’ us when we lied—thrashing kids is taboo these days, but we took it like blessings. He had a simple lesson for us: “Even if you have done something wrong, you must own up to it.” His sugar factory job was seasonal and contract­ual. The owners promised many times to confirm 53 contractual jobs, including his, but they backtracked later and offered some compensation instead. Des­pite having no means, my father fought the case in court for everyone. The management put pressure on him to drop the case and even offered a bribe. He refused to yield and went on to win the case.

Do you remember any turning point in your brother’s life?

After topping his Class 10 exams, my brother decided to go to Muzaffarpur to complete his Plus 2 with a friend. The night before he was to leave, my father said he hadn’t been able to arr­ange the funds and my brother’s trip would have to be delayed by a few days. The next day, my father turned up with the ­money, but said he didn’t want my brother to go to Muzaffarpur with that friend. Instead, he was sent to Allahabad. My brother wasn’t happy about it, but my father had some foresight and he sensed that the friend wasn’t headed anywhere and his influence wouldn’t be good for my brother. My brother had to figure out things for himself in Allahabad, but he topped in Class 12 as well. And my father was right—the friend was unable to complete his graduation and mostly lived off his rich parents.

After he topped the Class 12 boards, a politician friend of my father offered to use his influence to get my brother adm­itted to an engineering college. But my brother decided to prepare by himself and made it to IIT-Kanpur the next year.

Were you close to your brother?

When I was in Class 7, my brother got a job with the ministry of roads and highways in New Delhi and took me with him. Later, he also got three of my sisters to Delhi. He got us all educated there. It was while staying there with him that we grew quite close.

Beyond textbooks, what influenced him the most?

He used to a listen to music and sing often. He also read quite a bit. One book that was always with him wherever he lived was Gandhiji’s autobiography The Story of My Experi­ments with Truth. Since I was 12, I would see him read it at least once every six months. I don’t know how many times he must have read it. When he died, he had four pairs of clothes in all, and some books. A staunch Gandh­ian, he lived simply.

Do you remember how was it at home when your brother cracked the prestigious IIT entrance?

I was a child then and didn’t know what it meant when he cracked the exam and joined IIT-Kanpur. But it was a big deal. After all, he was the first from a cluster of 10-15 villages to get into an IIT. It was a big deal for my father too, but he didn’t display his excitement easily. The same happened when he was chosen for the IES because that made him a Class-1 government officer.

Your brother was transferred to Gaya from Koderma after one year and ret­urned after another year. Were these transfers routine?

The project director for the Koderma str­etch of the Golden Quadrilateral project didn’t like my brother for ­obvious reasons. There was a land acquisition hurdle for the contractor, which my brother didn’t dilute, and so the project dir­ec­tor had him sent to Gaya. My brother told me this was the price he paid for his honesty. He approached the roads and highways ministry and the World Bank, both of which found that my brother was right. The project director was ­transferred in September 2003. That vacancy had to be filled and so my brother was promoted. He was to take charge as project ­director on Dec­ember 1, 2003. But he was killed on ­November 27, 2003.

Did the family know about the letter he sent to the PMO?

I had seen the letter before it was sent and everyone else in the family too was aware of it. Nobody wanted to stop him, nor did they try, even though we were aware of the threats. After he was fed up with the corruption he saw, he had first written to his bosses at the National Highways Authority of India (NHAI). When there was no response, he wrote to the PMO, mentioning his identity and credentials on a ­separate sheet. But his letter was leaked along with his identity and eventually reached the NHAI. This time, the NHAI was quick to respond. The officials berated him and threatened him with punitive action. He reminded them that he was on deputation and could go back to the ministry and take action. Then they just issued an official warning against him. Before he was murdered, he wrote a single-page letter to the PMO again, referring to his earlier letter and informing that his life was under threat.

Where were you when your brother was murdered?

I was at the Benaras Hindu University (BHU), appearing for examinations during the second year of my engineering course. I got a phone call at 4.30 in the morning and headed straight for Gaya. When I reached, the Gaya superintendent of police (SP), who was my brother’s batchmate, was there along with the district magistrate of neighbouring Jehanabad. Some of my brother’s colleagues at NHAI had also showed up. As soon as I reached, the colleagues tried to hurry me up—they wanted me to just take my brother’s corpse and leave. The SP had said it couldn’t have been a routine robbery as the murder weapon seemed to be as sophisticated as his own pistol and not what the local robbers use. Later, it was said a country-made pistol had been used. The driver of the vehicle that was to pick him up in Gaya had claimed the car needed repairs. When we got the car checked, the mechanic found the battery totally discharged, with the car’s four main fuses blown up—something impossible in a one-year-old car.

From the beginning, we could see it was not on the right track. We tried to protest several times, but if the CBI is in charge, who will question it? After the judgement, we went to the lawyers, who said there wasn’t much left as the CBI had probed it and the court had given a judgement. They could not expose the conspiracy and only petty criminals were convicted. Considering the entry and exit wounds, the bullets must have been fired straight at my brother, who was six feet tall. That would have required a much taller person than any of the convicts. Moreover, he used to always tell people not to take that road back from the railway station. Why then would he take that route with Rs 2,500 in his pocket? And he was surely not stupid enough to fight with armed men over such a sum.

Your brother’s letter to the PMO eventually became his death warrant. Were those issues ever addressed?

Based on his letter, there was a case filed after his murder. As far as I know, all allegations were found to be correct and the case may still be open. We have demanded protection for whistleblowers several times.

Seeing the price your family paid, do you think that whistle-blowing is worth it?

If you look at it in the long term, it is needed for the betterment of our society. In the present scenario in India, though, it is not worth it. My brother lost his life and no action has been taken against the people he complained about. 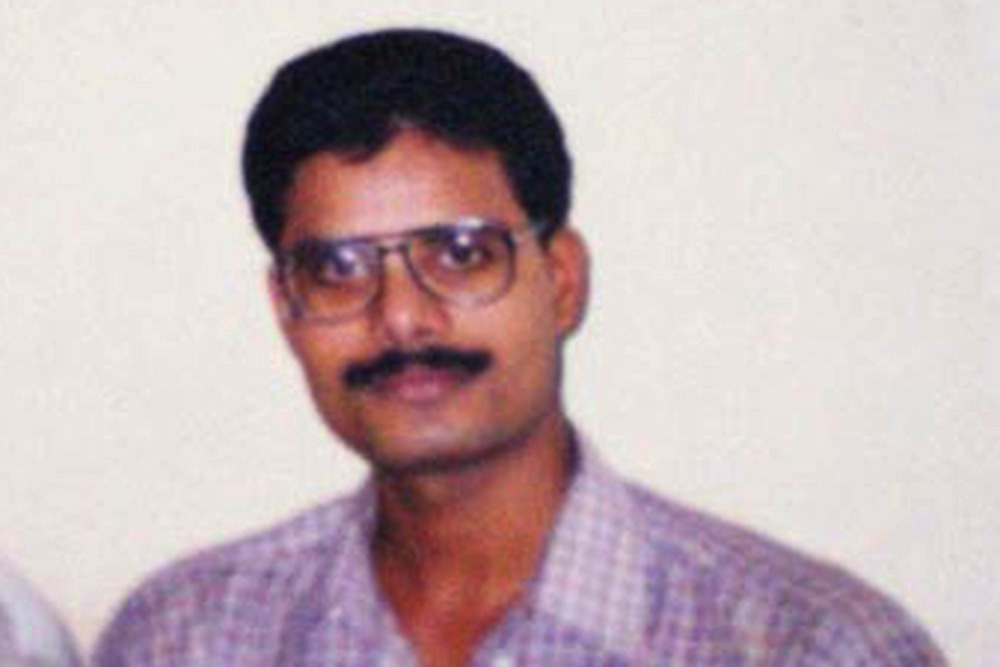 Key reasons why Satyendra Dubey was under threat

‘Poverty Is Violence With Tacit Consent’