It's Jingles All The Way

Money flows in as the BJP, all buoyant, cranks up a mean poll machine Updates 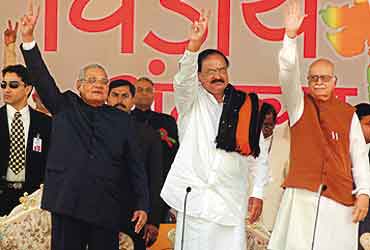 An election is always a gamble and the BJP knows that political uncertainties always loom on the horizon. Yet, if hard work, political strategy, organisational might and long-term planning are the ingredients of electoral success, then the BJP is certainly concocting a potent brew. With the 'India Shining' blitzkrieg having jump-started the party's campaign, it's now entering the second phase of the battle. To keep the sheen and the gloss, hard cash is needed. And things couldn't be better for the BJP. Its coffers are full, the battle plans drawn up, and its formidable organisational machinery cranked up. It is rich and ready to charge into Election 2004.

While the Congress claims to be strapped for cash, there are no shortages in the BJP. The big corporate donations are pouring in. Every business house now wants a piece of the party. For, most business houses expect the NDA to remain in office for another five years. Says a BJP general secretary: "It's quite simple really. If a corporate house is giving Rs 10 crore to us, it will also throw Rs 2 crore at the Congress. That's how it is done."

Add the big bucks to the traditional trader/shopkeeper backing of the RSS/BJP that has always provided the party with a sound financial base and it becomes clear that there's plenty to go around. The BJP-led state governments are also expected to contribute to campaigns in nearby areas. Says Mukhtar Abbas Naqvi, in charge of a committee that will oversee election programmes and tours: "Seven of our state governments such as those in Gujarat, Madhya Pradesh and Rajasthan will also facilitate the campaign in their states and neighbouring areas."

Pramod Mahajan, in charge of the main campaign committee, believes the Congress' problem is not lack of funds but lack of organisation and commitment. He points out the Congress is in power in some of the most cash-rich states such as Maharashtra, Karnataka, Delhi and Punjab. "Yet, they are crying they are broke," he says, adding: "I don't know how that party works but I can't understand how someone with a government in Maharashtra can be broke. Perhaps their problem is that the states don't really want to raise funds for the central leadership."

As for the BJP, there is a clear method in the financial management for the polls. Sitting MPs for instance won't be given cash; they are expected to raise their own resources. Candidates will also be given coupons worth Rs 1,000 to Rs 10,000 that they can "sell" to raise funds from local loyalists and financiers. "These coupons will be like an iou that the donor can hope to later encash in kind," says an MP.

Candidates will, however, be given materials such as posters and banners. An average requirement in each constituency will be around two lakh flags or banners and 2,000 big hoardings. Constituencies, too, have been divided into three categories—safe seats, close-contest seats and difficult seats. The maximum resources will be utilised in seats where the contest is close.

This categorisation will come in only by the end of February, after the BJP receives the findings of the detailed market survey it has commissioned in such vital states as UP, Bihar, Maharashtra, Karnataka, Andhra, Orissa and Assam. The party is not doing intensive surveys in states where assembly polls were held recently as it already has the minutest data on MP, Delhi, Rajasthan and Chhattisgarh.

The sample size is impressive: 1,800 to 2,500 respondents in each Lok Sabha constituency in the first round of market surveys. In fact, the recent assembly polls was the first time the BJP used surveys to identify probable candidates. Earlier, it was the recommendations of the state unit that really mattered.Now, the central leadership will also have independent data of its own while distributing tickets.

While Mahajan has commissioned the market survey that will provide the low-down on castes and candidates in each constituency, Arun Jaitley has already received the findings of an opinion poll that gives the broad trends in the upcoming elections. The polling agencies being used by Mahajan are Resource Data Inc (RDI) and ORG-Marg while Jaitley is using the services of pollster G.V. Narasimha Rao. By the time polling day arrives, both the BJP's tacticians should have the findings of another round of market surveys and opinion polls. Mahajan's surveys are designed to assist his micro-management at the constituency-level while those commissioned by Jaitley will determine the political spin on various issues.

Meanwhile, the contours of the BJP's advertisement campaign are taking shape. Broadly speaking, it will synchronise the 'India Shining' campaign with the "Irada naye Bharat ka (intent for a new India)" pitch that is already huge in the Hindi and regional TV channels and newspapers. Released by different government departments, this campaign details various government schemes. But unlike the 'India Shining ' pitch, a picture of the PM along with a poem written by him is used. While recording for the campaign, the PM had stressed that it must have a more rural flavour than 'India Shining'.

Interestingly, while the 'India Shining' campaign was conceptualised by the ad agency Gray, all the input for the 'Irada naye Bharat ka' spin is coming out of the campaign war-room set up at Mahajan's residence. Overseeing the nuts and bolts of the publicity blitz are IIT graduate Ajay Singh and OSD in the PMO Sudheendra Kulkarni. Ajay Singh says the PM himself gave crucial inputs to the campaign: "Atalji was clear that he did not want us to talk of the stockmarket or technology. He wanted the focus on rural roads, poverty and agrarian schemes. He changed several lines that he had recorded on the need to overcome poverty."

Outlook has also learnt that it is this 'Irada naye Bharat ka' team that will in all probability oversee the BJP's advertisement campaign. Till now, no ad agency has been asked to make a presentation or pitch. Says a senior BJP leader: "The decision will be made by month-end. But at this point it does not seem that one agency will be given the party account. In all likelihood, we will oversee the campaign and hire professionals to execute our ideas."

The campaign will broadly focus on Atal, Achievements and the Incoherence of the Opposition. In 1998, the BJP had presented Vajpayee as "the Man India Awaits". In 1999, the focus was on a "tried, tested, trusted Vajpayee". In 2004, the party will present him as the man India adores and the world admires.

Mahajan says the party's own campaign will not be on the scale of 'India Shining'. But in any case, the BJP is on top in the publicity game, what with the bill for both the 'Indian Shining' and now the 'Irada...' campaigns going to the exchequer. Since both these remain closely associated with the BJP, it's now small change for the party to finance a mega campaign asking the electorate to vote "kamal".