It's Historically Immaterial, And Yet

The party has no key strategist. But when it needs a negotiator, Yechury's their man. His past UF experience and people skills come in handy. 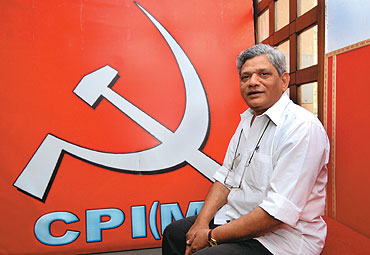 In the CPI(M), no individual can claim to be a key party strategist. When it wanted to implement a shift in policy, its powerful central committee decided to work collectively towards an alternate political coalition. But to make that political coalition a reality, it needs a canny negotiator. And that’s where politburo member Sitaram Yechury, 56, comes in. In this aspect, he has inherited the late H.K.S. Surjeet’s mantle. Yechury’s "people skills" and his past experience as the youngest member of the United Front’s steering committee made him the ideal person to deal with former UF colleagues, be it TDP chief N. Chandrababu Naidu or JD(S) boss Deve Gowda.

The UF years also brought Yechury in touch with Biju Patnaik, who introduced him to his son, Naveen, hoping the latter would take an interest in politics. Those informal contacts have come in useful to re-establish connections, and to build bridges with fellow RS MPs Pyarimohan Mohapatra and S.C. Mishra. As for Jayalalitha, AIADMK MPs and the CPI(M) local unit in Tamil Nadu helped establish contact before the "summit" meeting with party general secretary Prakash Karat. And the recent meeting with NDA convenor Sharad Yadav? The two know each other from their student politics days. Clearly, a case of old friends, new alliances and networking, CPI(M) style.