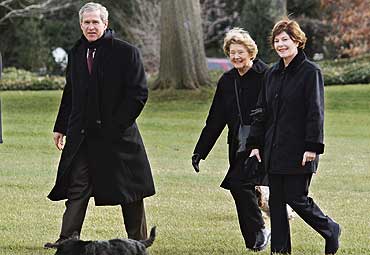 outlookindia.com
-0001-11-30T00:00:00+0553
It certainly is an "upgrade" from economy to business if not to first class. US President George Bush will host Pakistan President Pervez Musharraf at Camp David for a few hours and tempt the US' favourite general further into the new relationship. Although only a lunch date and not a sleep-over, the general still gets to sign the guest book right behind First Friends, British Prime Minister Tony Blair and Spanish President Jose Maria Aznar. Not everyone is invited to the cozy cottage hidden inside a 200-acre, maximum security compound in the Catoctin Mountain Park, Maryland. Incidentally, a first class upgrade is a trip to Bush's Texas ranch.

So what's cooking—for lunch and otherwise?

It was at Camp David in 1978 that Israeli and Egyptian leaders negotiated in secret for 12 days under the watchful eye of President Jimmy Carter, producing the first peace agreement between Israel and an Arab neighbour. It was from this retreat that Franklin Roosevelt and Winston Churchill planned the Allies' invasion of Europe during World War II. Bush and Musharraf, scheduled to meet there on June 24, are also expected to make grand pronouncements on the war on terrorism even as Osama bin Laden and, now, Saddam Hussein elude the big hunt.

However, the real beef might be in the fresh economic package to be announced, pushing the friendship to a higher level. State department officials were honing it as a series of Pakistani ministers and senior bureaucrats streamed through Washington, presenting wishlists. The package will centre around giving Pakistan better market access and greater incentives for US companies to make purchases in Pakistan. The war on terrorism has cost the Pakistani economy an estimated $10 billion, a figure given by Islamabad to Washington and revealed by the US Central Command (Centcom) on its official website.

Gen Musharraf opened his country to the US on a level rarely done before, collecting American gratitude now ready to be encashed. It is payback time. US troops have flown 57,800 air sorties from five Pakistani airbases and fields since the war on terror began. The Camp David meeting seeks to reseal the friendship between two allies briefly estranged over the last decade.

There is talk of a comprehensive package covering trade and investment. The buzz words, in fact, are "more trade than aid", a senate staffer said. "The final mix is still not clear but we will know soon," she said. A Pakistani diplomat told Outlook that Islamabad would like a "multi-year US commitment." In addition, it would like all sanctions lifted, not merely waived, on a yearly basis and another $1.8 billion in debt write-offs. The idea is to increase US stakes in the Pakistani economy, an idea pushed by finance minister Shaukat Aziz who is believed to have told the military it is better to move the relationship beyond geo-strategic compulsions. Aziz also has a line to Paul Wolfowitz, deputy secretary of defence, whose stamp on US foreign policy is indelible. The two were classmates.

It seems like an inexorable march into the past, reminiscent of the 1980s when US military and economic aid flowed to Pakistan without harm or hinder with Washington winking at Islamabad's nuclear programme. Pakistan got $4.02 billion for being an enthusiastic conduit in the US' proxy war against the Soviets in Afghanistan. The ravaged country is once again a pivot on which US-Pakistan relations are turning. The Pentagon is the engine—it swears by Pakistan's loyalty these days. The cooperation by Pakistani forces has been of such high quality that "not a single security breach" occurred around bases used by US forces even after troops were diverted from western to the eastern border to counter the Indian military build-up last summer, Centcom said on its website while providing excruciating details of Musharraf's cooperation.From use of air space to diversion of civilian flights, the Americans have full access. Islamabad was shaken by the "revelations" and asked the page be dropped instantly.

Everyone else is also on board the Pakistan train—the upper reaches of the state department with secretary of state Colin Powell's preference for a uniformed general over dissonant ministers of a democracy, key senators in the US Congress and sections of the White House. In advance of the visit, Pakistan's foreign minister Khurshid Mahmud Kasuri pinned his country's second highest civilian award, Hilal-e-Pakistan, on Senator Sam Brownback, a man who has helped ease the pain of US sanctions over the years by writing Pakistan-friendly amendments to key laws.

Ironically, the only voices opposing this Islamabad-dependent policy are the neo-conservatives who argue that senior and middle levels of the Pakistani military are tainted by the same radicalism they purport to fight. But as Washington divides time between managing Iraq and Afghanistan, Musharraf's help is crucial. Bush is already in election mode, which means he will focus mostly on domestic issues.

Despite talk of trade, military equipment is very much on the agenda especially after the US showed the green light to the Israel-India deal on the Phalcon. The US budget for fiscal year 2003 has already allocated $225 million in foreign military financing for Pakistan, in addition to the $75 million apparently left over from last year's supplemental funding. The money will help fund the new orders, especially an early warning system similar to India's Phalcon. Islamabad wants the E-2C warning-and-control aircraft, the all-weather, high-altitude "eyes and ears" of the US forces, aka "the quarterback". Other demands include UH-II utility helicopters, AN/FPS-117 radars, unmanned aerial vehicles, P-3C patrol aircraft and C-130 cargo planes. Lincoln. P. Bloomfield, assistant secretary of state for political and military affairs, completed a four-day visit to Pakistan last month, visiting the army brass to discuss the wishlist.

It was the C-130 that Pakistan used to conduct illegal trade in missile and nuclear technology with North Korea last summer in violation of US non-proliferation laws. It was a move so brazen as to temporarily shock even the most determinedly we-can't-rock-the-Pakistan-boat crowd in Washington. But not enough to take concrete action except slap "cosmetic" sanctions. US presidential executive orders, which clearly state that any country found assisting another in nuclear, missile, chemical and biological weapons technology will be sanctioned, were ignored.

Although, a "Mission Performance Plan" of the US Embassy in Pakistan, recently leaked to the press, claims the military equipment is "defensive", any sale of sophisticated hardware is bound to irritate New Delhi, if for nothing else than the continued American attempts to "balance" India and Pakistan. If India gets the Phalcon, Pakistan can get the awacs. In addition, Pakistan gets a financial bonanza, which is piling up neatly in the central bank roughly at the rate of $60 million a month since October 2001. The money is for "actual reimbursement" for expenses incurred by Pakistan for US troops, the use of bases, petrol, equipment, manpower and miscellaneous expenses. And the rent is always going up. Did anyone say deja vu?

Child Is The Father Of Man