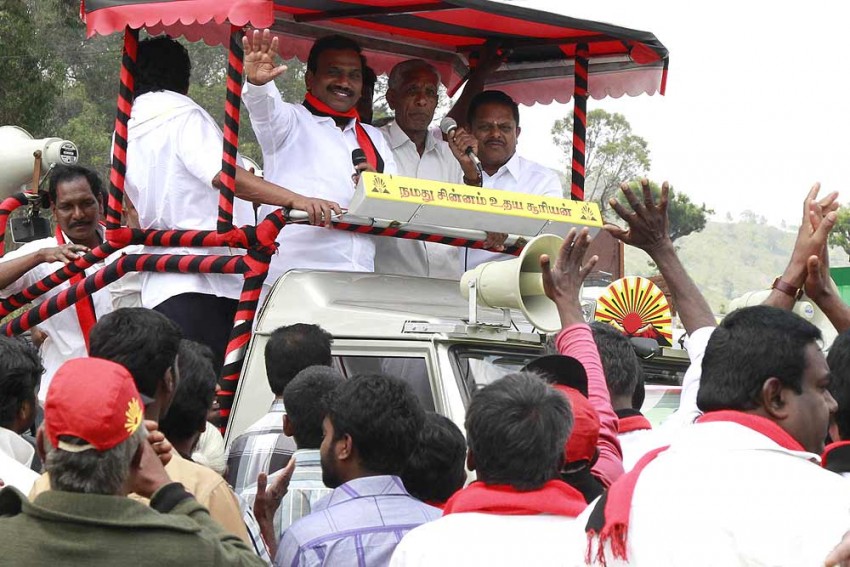 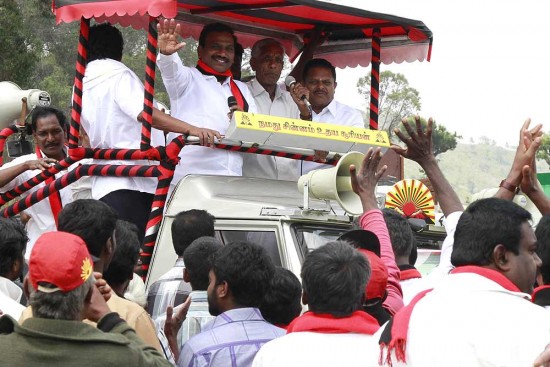 Perched on a hairpin bend of a Ghat road, surrounded by tea carpets is Kenthala. The small Badaga village is buzzing with activity and a passerby would be forgiven for mistaking that a fair had arrived here instead of the poll campaign making a pitstop for votes. Kenthala’s 250-odd residents have gathered around the bus shelter and are spilling out onto the road that best serves the purpose of an non-existent village square.

The quiet of the hills is interrupted by a cacophony of noises—a voice calls over the microphone urging the “Tamil makkal (children), Nilgiris makkal” to come running, the music blares ann­ou­ncing the rising of the sun (the Dravida Munnetra Kazhagam symbol). Yusuf, the ice-cream seller, waits patiently for a break in the music to blow his own horn. Children run around wearing masks of the Kalaignar (M. Karun­a­nidhi, former Tamil Nadu CM) or eat ice-creams while old men wearing red and black mufflers (the party colours) sit around gossiping. The candidate, former Union telecom minister A. Raja, is expected to arrive any moment. Surprisingly, it’s not just the DMK men who have gathered, supporters of the state’s ruling party, the AIADMK, are also there. The Badaga community, which has a sizable population in the Nilgiris, were once staunch supporters of the Congress, but are now divided in their political leanings three ways.

Raja may be an accused in the 2G spectrum case but it’s not really an issue in Kenthala or in neighbouring Coonoor. What weighs on everyone’s mind is the disqualification of the BJP candidate, S. Gurumurthy (the party was set on contesting seven seats in Tamil Nadu but is now only there in six). Gurumurthy had forgotten to submit form A and B to the returning agent and was instantly disqualified. The big question for the cadres and supporters of the BJP and its numerous allies, MDMK, PMK and DMDK, is who to vote for now. Says K. Lokha­nathan, a writer in a tea warehouse, “Ten days ago, the DMK was sure to win, but now the AIADMK has a chance because the BJP voters, stuck without a candidate, will cast their votes in that direction.” But there are others dismissive of Lokhanathan’s claim, “It is Raja who will claim victory in the Nilgiris. He has been serving the people. We need a man like him.” An argument erupts as to who paid off Gurumurthy—was it the DMK or the AIADMK? (The embarrassed BJP state unit has formed a committee and is investigating the matter. Guru­m­urthy was summoned before the committee to give an explanation.)

The man on the microphone is still highlighting Raja’s achievements: “How many people were holding mobile phones before Raja became minister? Every household has numerous phones now, each of us have a telephone...me and my brother too.” Murugan, from Kotagiri, is waiting for the bus, but he nods in agreement and says they don’t need freebies from Jayalalitha. “Freebies are for beggars. We want water and employment in this area, not mixies and grinders. Our youth are running away to other states or to the big cities.” A few minutes later, Raja arrives in an open jeep and crackers are burst to welcome him. People press closer to his vehicle and he addresses the crowd about his achievements—one is that the Nilgiris does not suffer from power cuts like the rest of Tamil Nadu—before he moves on.

The Nilgiris does seem like a pampered constituency, at least on the surface. There are indeed no long hours of power cuts, CM J. Jayalalitha often rushes to her home here in Kodanad and carries out her constitutional duties from there. (Last year, she was even criticised by the opposition for spending almost a month here, away from Chennai). The two AIADMK members nominated to the RS early this year, Selvaraj and Arjunan, are from this constituency. Ideally, it should be a cakewalk for the Coonoor Municipality chairman, C. Gopalakri­shnan, the AIADMK candidate. But on the ground it’s ‘Spectrum’ Raja who looks like having the edge.

Ask the people in Coonoor and their anger against the chief minister and the AIADMK councillors (perceived as having done nothing for the locality) comes as a surprise. Says Ponnuswamy (name changed), an auto driver, “Jayalalitha is a liar. Who is bothered about Raja’s case? Even Jayalalitha has assets which are disproportionate. We are not bothered about all that, we are only asking that these politicians do something for us.”

The Ambedkar colony three kms from Coonoor town has 2,500 residents in 875 houses. It’s besieged by a plethora of problems—water scarcity, bad sanitation, crumbling walls, land record issues, unemployment. Says a resident, “The councillor from the  AIADMK hasn’t visited us in the past three years. When we call him, he says he’s in Chennai. Raja came here a few days ago and he has promised to ensure that we get water if he is elected. We were promised mixie, grinder etc by Jayalalitha but we haven’t got any of these things. We have been completely ignored. There are just two public toilets for men and two for women here...even here there is no water.” Hilda Balan, a 28-year-old pregnant woman with a three-year-old on her hip, has more woes to add. Tucked away at the end of the colony near an open drain, her house crumbled down three years ago. She’s now living in a tin shed without electricity or water.  She had approached the authorities but no one was bothered. As for AIADMK candidate Gopala­krishnan, let alone seeing him, no one seems to know anything about him.

The Nilgiris constituency is compo­sed of three assembly segments in the plains (from three different districts—Mett­u­palayam, Sat­yamangalam and Avi­nashi) and three in the hills—Udhagamandalam, Coonoor and Gud­a­lur. A BJP leader who didn’t want to be quoted feels the people of Gudalur will vote for Raja as he’s built a college in the area. Even as analysts speculate which way the voters who favoured the BJP and its allies will vote, Raja seems sure of a victory. The DMK party has already added Nilgiris as a seat to its winning column.