The US and Europe have obfuscated market dealings, that’s why their economies are still faltering while emerging economies gain 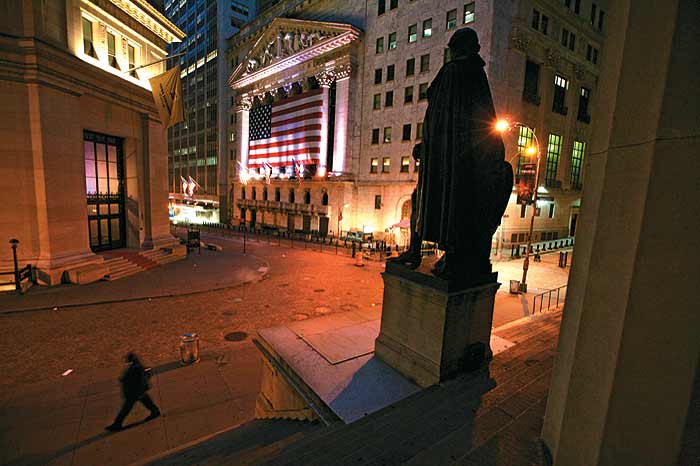 The Need To Know

Here we are, three years into the global financial crisis, and we’re still flying blind. We don’t even know what we don’t know.

What we do know is that we’re stuck in a huge contraction of private credit; no one is making enough loans and investments to expand or start businesses and get the economy growing. The remedies applied by US and European governments tried to treat the symptoms—bad debts, shaky banks, floundering businesses, people losing their homes, rising unemployment, currency wars—and not the disease.

Had those symptoms been the real cause of the crisis, ‘vulture capitalists’ should have swept in by now. They should have spotted the signals that send knowledge of who is in trouble and—following the laws of supply and demand—picked up, on the cheap, the potentially lucrative remains of the non-performing assets and transactions, correcting the deficiencies that led to them.

They would have bought a block of old houses and revamped it into a 20-storey high-rise with two restaurants and ample parking. They would have taken over an airline unable to fill its first-class section and rearranged it into a discount, no-frills option with twice the number of seats per plane. That hasn’t happened to any significant degree. Why?

Mechanisms in the US and Europe to record and signal the crucial knowledge that determines whether it is reasonable to grant private credit—who has the property rights over the assets, equity and liabilities, and therefore who holds the risks and what the opportunities are—are no longer reliable. The knowledge system is broken.

You could say that the knowledge organised by property and transaction records plays the same role in credit that dna plays in biology: it stores the long-term, measurable information that governs how the different cells of the body come together.

Balance-sheets that once clearly signalled facts, allowing outsiders to infer what that company owned—and owed—have too often been mutilated. Some companies in difficult financial situations can legally resort to ‘off-balance-sheet accounting’—transferring the bad news to less visible ledgers, called special purpose entities, or SPES—or sweeping information regarding their debts into illegible footnotes. Knowledge of billions of dollars in debt from failed transactions and property transfers, once readily available to the public, has been blurred or hidden: when Enron collapsed, it had 3,500 spes.

Those symptoms, if they were the real cause of the crisis, the ‘vulture capitalists’ would have swept in by now. They would have spotted the signals of who was in trouble....

In the US, mortgages have been bundled into marketable liquid securities, sliced and diced in different ways, robo-signed into so many piles that it is difficult to identify who legally owns some 60 per cent of them.

Much of the financing for mortgage bundling came from idiosyncratic financial derivatives that were not recorded in any standardised way. That makes them difficult to locate, value, gauge their risk and find the resources to cover that risk.

The estimated notional amount of these derivatives is some $600 trillion—40 times what the US produces in one year. That’s a lot of missing knowledge.

Accounting rules now allow companies in certain situations to establish the value of their assets using measurements other than market prices. Countries like Greece and Italy have borrowed through the ‘repo markets’, short-term funds they don’t have to report as loans, making them look more solvent than they are. In other words, knowledge has not only been debased and withheld, but also distorted. 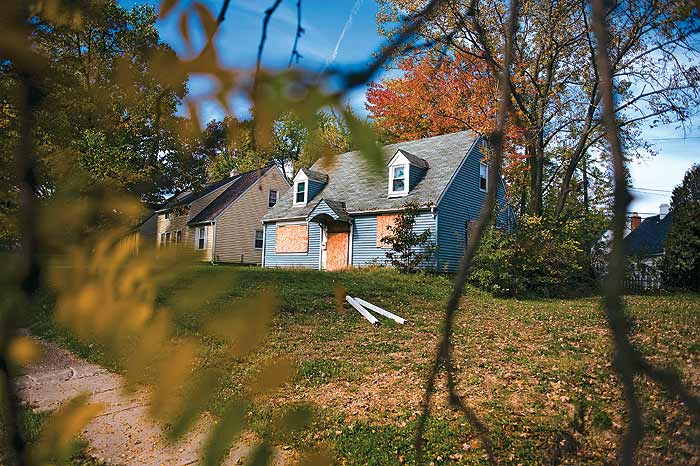 An Ohio house, part of the epidemic of US foreclosures. (Photograph by Dustin Franz)

Having spent 150 years opening up their feudal, patrimonial, cloistered and non-transparent economies to allow markets to work, certain sectors of the financial industry, and others in governments in the US and Europe, have devoted the last 15 years to shredding the very reforms that ensured that capitalism had the knowledge to function fairly on a global scale.

Economic activity has been allowed to cross from the rule-bound system of property, where facts and interests are recorded and built into useful knowledge, into the incomplete legal space of global finance, where arbitrary interests trump facts and paper swirls mindlessly and out of control.

How can anyone be comfortable extending loans if balance-sheets don’t signal all the facts? If those who hold the assets and the risks cannot be easily located? How do you know which banks and countries are solvent if you cannot determine how many toxic assets they hold; if the legal owners of mortgages can’t be found; if banks can’t clear their books because courts continue to stop foreclosures because titling is unclear; if there is little information on whether those who claim they can cover risk defaults have the assets to do so?

This, then, is not your usual financial crisis. The plummeting economy is the symptom. Diminishing knowledge is the disease. Without property and transaction records that allow us to infer potential benefits and losses, markets can’t work; the credible facts needed to generate credit just aren’t there.

That’s what we’re trying to do in emerging markets today—and why we are emerging, from my native Peru to Tanzania, India and China. We are pushing to get people who have never been recorded into the books, to get officials to accept standards so everyone can be measured and held accountable, and thus bring our shadow economies under the rule of law.

In India, for example, the visionary former CEO of Infosys, Nandan Nilekani, is working with the government to identify and locate every one of that country’s 1.2 billion people so they can earn the trust of businesses and banks.

Tanzania recently created MKURABITA, a programme to formally record and update knowledge about assets, moving them from the informal to the formal economy. Starting in l990, my organisation revamped Peru’s property system. Today, we know that informal real estate that was recorded according to law in l997 was, on average, worth 700 per cent more by 2010; compare that to the New York Stock Exchange, which in the same period rose only 79 per cent.

Following our reforms in Peru—designed to make enterprises in the shadow economy legally visible—the ‘Doing Business’ project of the World Bank now provides emerging markets with data to help them put similar reforms in place. Just about every emerging market—even Russia and China—has enacted laws in recent years to record assets and transactions.

We in the emerging markets now have more knowledge about our formal economies than ever before. That’s why the sub-prime drama that marked the beginning of the crisis in the US and Europe is unlikely to happen to us.

As tragic as it was that a number of home-owners of modest means couldn’t meet their mortgage payments and many were prepared to turn over their houses to their creditors, non-performing debts estimated to be worth less than a trillion dollars were hardly enough to trigger a historic, persistent credit contraction. But they did, because the credit that was contracting was not anchored in bills and coins but in the knowledge contained in property reporting and signalling systems, which had deteriorated.

When that paper ceases to be reliable, when it no longer functions as a signal for collateral, as an enforceable guarantee, a credible assurance, or a reasonable measure of risk, then WHOOSH! private credit vanishes. Just as your identity does when you step up to the immigration counter and discover you’ve lost your passport.

That’s precisely what happened when the sub-prime crisis exploded. The derivatives that financed the non-performing sub-prime mortgages were rapidly losing value and threatening to cause a run on the banks because there was—and remains—so little property knowledge about them.

When that paper ceases to be reliable, when it’s no more a signal for collateral, or a reasonable risk measure, then—WHOOSH—private credit vanishes.

When the US tried to buy and remove them from the market with the Troubled Assets Relief Program, officials were unable to locate, classify and price them quickly. They too became a victim of the lack of knowledge. The government was forced to improvise, and the money was used instead to increase public credit, lower interest and shore up the banks. That remedied the symptoms, but the disease remains: property documentation continues to deteriorate, not providing the foolproof knowledge required to extend credit.

In emerging and transitional markets, after having injected so many bills and coins into our economies, in vain, it is easy to understand why there is no credit without knowledge—it’s not only about money.

Close your books and walk down a busy street, and you will see that the businesses and the buildings that cannot get significant credit are those in the informal economy, not recorded in the property systems: the unknowables. Instinctively, we are aware that what we know about the economy is pretty much what we have recorded. Without records, there is no memory, no knowledge—and thus no grounds for trusting the markets.

Restoring order in the western world is beyond the purview of specialists in finance, who do not necessarily have the knowledge, the inclination or the incentives to carry out the nitty-gritty, down and dirty job of repairing knowledge systems.

Fixing all this is a political endeavour. Politicians must muster the courage to rise above the narrow focus of financial adjustments and raise the issue of the recession to the level of the commanding heights; entrenched institutional problems of a failing order must be addressed. I am not calling for more or less regulation, or for injecting more money into the economy, or for spending less. I am simply proposing to bring the world of finance under the rule of law and shine light into dark and disordered places.

My friends in the financial world insist, “It’s too tangled to sort out.”

It’s been done before. That’s what the bold reformers did to sort out conflicting property claims after the California Gold Rush, to tame the Wild West, to rebuild war-torn Europe, to reassemble Japan’s feudal order into a market economy—and push China toward one—and to open up eastern Europe after the fall of the Berlin Wall. Markets cannot work without the knowledge that organised property systems produce. That is how capitalism was built.

Once it is clear that this recession is about the organisation of knowledge or, more precisely, the lack of organisation, western governments can step in to get the facts. That will allow them to find and target the disease, without getting stuck in the left-versus-right controversy about increased regulation and state oversight.

We need increased truth-telling: increased recognition of what exists and who owns it.

An acclaimed reform economist and author of The Other Path, de Soto is chairman of the Institute for Liberty and Democracy in Peru

Red Ink For Our Walls!