It's A Free Kick For All

Bend the ball over social barriers—it's a new, egalitarian approach to football 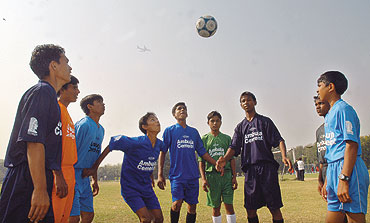 outlookindia.com
-0001-11-30T00:00:00+0553
They say football, unlike some class-inflected games, is a great leveller. Walk in to Delhi’s Thyagaraj Stadium on a Sunday morning and you’ll find proof in the shape of hundreds of children—all in the age group of 11-18—and their enthusiastic parents. The kids don smart football uniforms, down to their shoes, and take the field with the zest of a David Beckham, the energy of a Ronaldinho, the guile of a Thierry Henry and the dynamism of a Frank Lampard. Some distance away at the National Stadium near India Gate, kids between the ages of seven and ten get busy, showcasing their hunger for football.

A large number of parents settle down in the shade, waiting for their kids to finish their engagements while some others happily cheer them on from the sidelines. It is, to say the least, a soul-lifting sight, watching children learn to work together and compete against their peers.

There’s another small bunch of kids whose parents are not around to egg them on or wait to drive them home. These are orphans from Paharganj’s Salaam Balak Trust which works with street children. For these kids, it’s a chance to mingle and play with school-going children of their own age. "The idea is to make football accessible to all, particularly the poor," says Indian Youth Soccer Association (IYSA) trustee Arup Das. So there are schemes that are aimed at the poor in the metros, towns and large villages throughout India. The aim is to promote soccer, and develop the image of players and officials as caring people dedicated to the sport and the poor. "We’ve found that bringing football to the poor is inexpensive and easily organised in collaboration with reputable NGOs," adds Das.

Hence the collaboration with the Salaam Balak Trust. "We’ve devised weekly soccer sessions for its inmates. We provide expertise, training and coaching inputs and the ngo provides the space and volunteers to referee matches. In the long term, we want to merge our two initiatives so that school and street kids can play together," says Das. As a non-profit educational trust, the iysa mission is to "foster physical, mental and emotional growth and development of India’s youth through soccer," adds Das. "Our job is also to make it fun and instil in young players a lifelong passion for the sport. We promote fair play and offer leadership in the development of youth soccer."

According to him, the IYSA recognises that soccer has been neglected by schools and football organisations. It also believes there is a need to give children an opportunity to enjoy the game. "The IYSA aims to provide a fun, safe and healthy game for all kids—rich and poor, boys and girls. Those in government schools, private schools and the millions who spend their childhood out of school. It’s for those who want to play for fun, compete at the highest level or just play for one season, or even for a lifetime."

Of course, as is usual with such initiatives, there are setbacks. Children who appeared to have taken to the game have run away from the Salaam Balak Trust. Plus, for some reason, IYSA has had to focus on central Delhi rather than expand its reach. Sadly, neither the Delhi Soccer Association nor the All India Football Federation has had the time to even take a cursory look at the IYSA project that has the potential to spark off a major movement. But it soldiers on, unmindful of the lack of interest.

Even if you’ve never been inclined to play the game, take your child to Thyagaraj Stadium to soak in the sheer fun. Sania Mirza may be the flavour of the season and the Indian cricketers may be regaining their places in the hearts of their fans. Yet hundreds of kids are voting with their feet, in a rather different sense. In its own way, IYSA has used the game to help make a difference to society and perhaps to some lives at large. Indeed, it is worth kicking that ball.