It Worked For Us

India Shining, a story of accidents, from policy to crony capitalism. 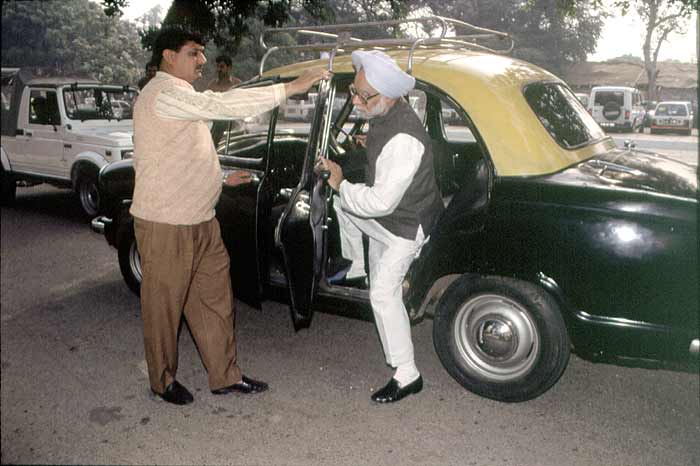 The story of India’s economic reforms is usually mistold. It begins with 1991 and Manmohan Singh as lead actor. This is a bit off. The real story revolves around two personalities and a population weary of politicians’ excuses for non-performance. The two personalities were Indira Gandhi and Dhirubhai Ambani.

The irony of India’s reforms saga is that it began around the same time as China’s in the early 1980s. But India’s wayward democracy mandated us to stumble along the way repeatedly while China’s autocratic leadership ploughed on with reforms, unmindful of political consequences. The huge gap between China’s turbo-charged growth in the last 30 years and India’s transition from a slow, secular rate of growth to a faster Hindu rate can primarily be explained by the democracy premium.

I have deliberately reversed the meaning of ‘secular’ and ‘Hindu’ rates of growth because the 3-4 per cent we were achieving before the 1980s was driven by socialist-secular policies of a dirigiste Congress-CPI thought alliance. The post-’80s acceleration reflects a truer ‘Hindu’ rate of growth—an indisciplined dash driven by extreme entrepreneurship, graft, caste assertion and political pandering to votebanks. It worked for us.

Indira Gandhi realised that if she had to meet rising popular expectations, economic liberalisation was a must. To turn right, she created a diversionary distraction to the left by nationalising six banks soon after she returned to power in 1980. Her socialist credentials re-established, she began loosening the rigours of the licence-permit raj by adopting a policy called broadbanding that allowed companies to produce more or different products with the same licence. Tariff walls were also selectively lowered to allow for economic modernisation and scale economics to kick in.

Dhirubhai freed capital from the babu’s clutches, raising money from the people directly.

Harnessing this process through behind-the-scenes policy nudges and pushes was Dhirubhai Ambani, the prime beneficiary of this early phase of liberalisation. His mission was achieving global scales through local action. He saw that no Indian company could be globally competitive without lowering the cost of capital; he ensured that his cost of capital was reduced to near-zero by assiduously seeding the capital market and creating the equity cult. He raised high-cost debt and converted it to equity at a huge premium, thereby cutting the real cost of capital. If Indira Gandhi was freeing business from the shackles of babudom, Dhirubhai freed capital from their clutches by raising money directly from the people. He democratised the capital market. He scripted the end of a species called the development financial institution, cutting public sector financial oligarchs down to size. Other entrepreneurs learnt his tricks soon enough.

But politics did India in. As the 1980s progressed, Indira Gandhi was increasingly distracted by the murderous militancy in Punjab, to which she ultimately fell victim. Her two successors—son Rajiv Gandhi and V.P. Singh—began their terms with liberalising instincts, but corruption and politics overwhelmed them. Bofors immobilised Rajiv Gandhi and Mandal-mandir politics consumed V.P. Singh. Both let the economy slide towards bankruptcy, leaving the field clear for Manmohan Singh and Narasimha Rao to do the rescue act.

It is customary to credit Manmohan for the economic reforms of the early ’90s, and we need not be churlish about that. He was the right man in the right place at the right time. Yashwant Sinha, his predecessor, came up with many reformist ideas in his ill-fated 1991-92 budget. But his government, headed by Chandra Shekhar, fell before he could present it. Sinha went down in history as the man who mortgaged the country’s gold reserves, Manmohan as the man who brought it back. The worst things that happened to India have ultimately turned out to be the best. If we had not been close to external bankruptcy in 1990-91, we’d never have accepted the need to reform. It is not without reason that Manmohan Singh’s record as an economic reformer stops in the mid-’90s. The real reforms between 1994-2004 happened during the United Front and NDA regimes.

The Mandal-mandir fracas at the turn of the 1980s was another period of national trauma—but it created the right conditions for India’s next growth push. As caste and communal tensions flared up, reaching its nadir in the razing of Babri Masjid in 1992, two things happened. First, the OBCs suddenly bubbled up to the top, demanding a share in economic power. The country’s growth aspirations were broadbased, laying the foundations for today’s consumption-led economy that gives us an edge over China’s investment-led growth.

Second, the communal fallout of Ayodhya led to big changes in the way Muslims perceived all mainstream parties, the Congress included. The community realised that the Congress was essentially running a protection racket in their name by assiduously fanning fears about majority communalism. Digvijay Singh’s latest nonsense about Hemant Karkare’s tragic death during the 26/11 terror attacks shows nothing has changed.

Fiscal irresponsibility in UPA-I brought its own advantages for India—and for the wrong reasons.

Muslims, who constitute close to 14 per cent of our population, know this. In 1992, they came to the conclusion that they could not depend on the Congress’s secularism to help them seek the benefits of education and jobs. In the decade between 1991 and 2001, ordinary Muslims quietly went on to invest in their own future by sending their sons and daughters to school. The 2001 census shows that Muslim literacy rates are higher than average in 10 states. The community’s backwardness is largely confined to Uttar Pradesh, Bihar, Bengal and Assam—the last two being skewed by population inflows from neighbouring Bangladesh. While Muslims still lag behind upper-caste Hindus, what is clear is that the base of India’s middle class is being expanded once again. Muslims are slowly, but surely, being conscripted into the India growth story, though politicians like Digvijay Singh would like to slow this down.

Our next major crisis—which once again gave a push to reforms—came during NDA rule, when the Vajpayee government conducted its Pokhran blasts and courted global sanctions. Two things happened because of this. First, since there was no knowing whether the sanctions would bite, the NDA speeded up reforms to ensure the availability of global capital. This was when disinvestment went into overdrive under Arun Shourie, and the telecom mess was sorted out. Reforms happened with a vengeance.

The second thing that happened was Kargil—and this too played a part in globalising India. Having achieved nuclear parity with India, Gen Pervez Musharraf decided to go for broke on Kashmir with his Kargil incursions. His calculation: by threatening nuclear escalation, the world would panic and force India to negotiate on Kashmir. His plan backfired because the world had seen the other side of India by then: a potential technology superpower that helped avert catastrophe on Y2K. The world’s dotcom boom was significantly powered by Indians. And since American satellites had seen what the Kargil intruders were up to, Bill Clinton knew it was Pakistan’s provocation. He refused to help prime minister Nawaz Sharif unless he de-escalated Kargil. The Kargil opening provided the right backdrop for the US and India to re-engage, and 9/11 helped escalate the relationship under George Bush to something more strategic. India had arrived on the global stage.

The story of India’s rise as an IT superpower is also worth restating. It was less a product of strategic thinking and more the result of a foreign exchange shortage mentality. The government allowed Indian tech companies to go untaxed on their external earnings, enabling the Infosyses and Wipros to grow unencumbered by the restraints that held back brick-and-mortar companies. 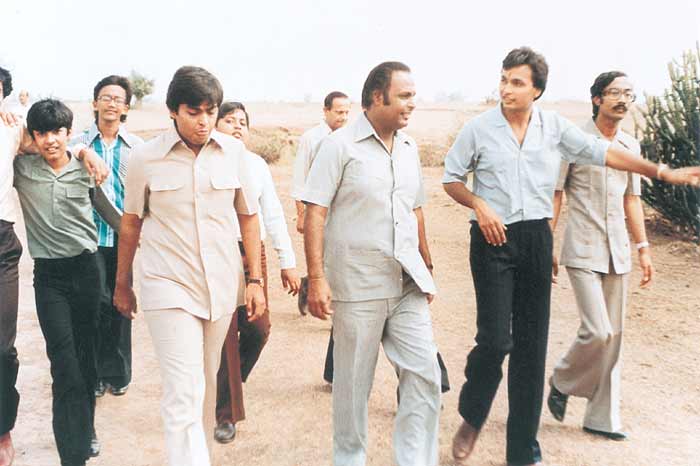 Way in Dhirubhai and sons at the Patalganga petrochem complex inaugural in the ’80s. (Photograph by Jayanta Saha)

India’s IT prowess was built on four legs: an official hands-off policy, a supportive fiscal regime, a huge talent pool created by Nehru’s investments in the iits and iims, and the policies of social empowerment in states like Tamil Nadu which forced the upper castes to look to the rest of India and North America for employment. The upper-caste diaspora created the initial Indian IT brand; the newly empowered OBCs and other socially disadvantaged groups will widen the reach of the brand in all knowledge-intensive businesses.

Fiscal irresponsibility in the UPA years created its own advantages for India—and for the wrong reasons. Huge fuel and fertiliser subsidies and social giveaways (NREGA, farm loan waivers) brought the fiscal deficit almost back to the levels Manmohan Singh encountered in 1991-92. But India benefited from wrong policies because the rest of world was doing worse. The Hindi phrase ‘andhon mein kaana raja’ (one-eyed in the land of the blind) summarises India’s global situation well. When North America, Europe and Japan goofed up on regulation and let their economies collapse, India’s overcautious policies protected us from banking chaos. Hot money had nowhere to go but India, China and other emerging economies. The over-expansionary fiscal policies of 2004-09 widened the consumption market back home. Today, the hike in overall wages and prices due to NREGA spending has created new consumers among the poor at the cost of higher inflation.

The author is DNA executive editor.