What is a love story if it doesn’t emotionally inv­olve the vie­wer? 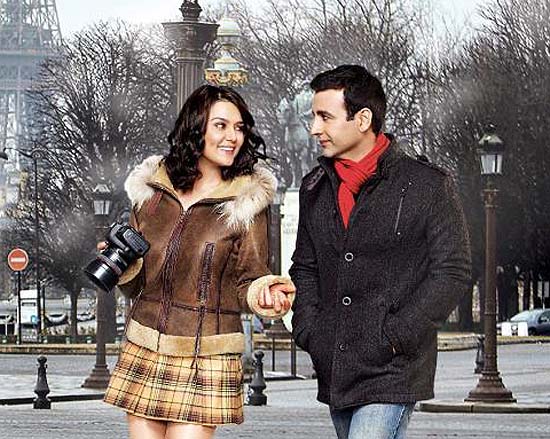 He wears surma, carries along a Durex condom and hopes the dice of luck will somehow send the three-letter word, sex, his way. He is the hero of the film and also its most dour (almost plywood) presence. She tries to be as lively as ever, just that it doesn’t sit as well on a face that seems to have gone under several scalpels to look artificially angular instead of delightfully round and chubby the way it was. The dimples, thankfully, stay. She is Pre­ity and he is Rhehan, once  in the industry as Gaurav Chanana. In the film they bump into each other on a train from Rome to Paris, spend a whole night walking in the city of love and discover affection for each other quite like Before Sunrise’s Ethan Hawke and Julie Delpy did in Vienna. However, Preity and Rhehan have very little chemistry going to move the audience. And what is a love story if it doesn’t emotionally inv­olve the vie­wer? In fact, it feels too lightwei­ght a relationship and the film is just as thin. A tedi­ous voiceover tries to spo­­on­feed. Salman Khan, Shekhar Kapur and Isabelle Adjani are used to ignite spa­rks but do no more than look confused. And there are profo­und lines, like “life is a bitch”. Only the gorgeous city makes one stay on the seat.