An ex-CM's rumoured nexus. A lot of Bangalore acres at stake.... The Infy story isn't all about IT. 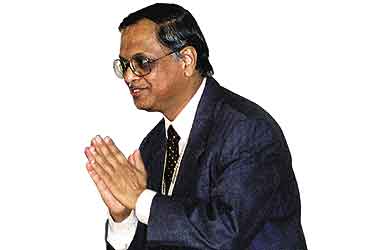 "Creating land banks was a key challenge. We persuaded state governments to allot us land."

Everyone knows the Infosys story. A cornerstone of the ’90s IT boom, it changed the way India looks at wealth creation and how the world looks at us. If the world today looks at India as a knowledge superpower, then a majority of the credit could go to Infosys. Company chairman and chief mentor N.R. Narayana Murthy’s humble beginnings, the grit, determination and manner in which he built Infosys is now the stuff of legends.

But, right now, Infosys and Narayana Murthy are at the centre of a storm in Karnataka involving the company’s political affiliation to the former Congress regime and ex-CM S.M. Krishna, its current land holdings and requests for more prime land in Bangalore’s vicinity.

Here’s an inventory of the ‘land banks’ in the possession of Infosys and its efforts to acquire more:


All these immovable assets of Infosys and its attempts to obtain more land would not have come under scrutiny if it wasn’t allotted at a concessional rate, and, more importantly, if it had not been perceived to be close to ex-CM Krishna. Political neutrality and Infosys is one issue that has irked former PM Deve Gowda. At a press meet last week, he said: "I respect Mr Narayana Murthy. But he can’t play politics at S.M. Krishna’s behest. Murthy shouldn’t interfere in day-to-day administration. I don’t understand this nexus." Gowda’s rebuttal came after Krishna’s three-day "virtual roadshow" in Bangalore, taking on his opponents and holding a brief for the IT industry on the city’s poor infrastructure.

In the last 10 months that Krishna has been Maharashtra governor, each visit of his to Karnataka has kicked up a row. "I accept Krishna’s political challenges, but why is it that each time he opens his mouth he talks about the IT industry? By IT industry, he doesn’t mean the entire industry, he means only Infosys. Have Krishna and his family invested in Infosys?" asks Gowda, questioning the timing of Murthy’s resignation as chairman of Bangalore International Airport Limited (BAIL). According to R.K. Misra, vice-president, Flextronics, Murthy had actually decided to quit two months ago (see interview). In short, his dramatic exit on October 20 was more to embarrass the state government and Deve Gowda.

On the issue of the Krishna-Infosys proximity, former IT minister in Krishna’s cabinet and ex-IIM professor, B.K. Chandrashekar, told Outlook: "I, too, have heard reports of a nexus (between Krishna and Infosys). It’s so important for corporates to maintain and be seen to be maintaining complete neutrality and indifference. One understands that money has come to play a more proximate role in all political parties, perhaps the reason why we are witnessing the turbulence we are seeing today."

But what is Krishna's gameplan? According to Congress circles in Delhi, he has made it clear that he doesn't wish to continue as Maharashtra governor. He even told senior party leaders that he wants to move to mainstream politics. But Krishna doesn't have many backers in the high command and his differences with Ahmed Patel, Sonia Gandhi's political secretary, have not helped. The buzz is that he is even toying with the idea of starting a new political party in Karnataka. Says a Congress source: "Things have reached such a point that Krishna would not mind being asked to quit the party."

While political games are being played out, there is some discomfort within the IT industry over the way Infosys has been pushing for government land. A majority of infotech companies have procured land at market price or work out of rented spaces. Points out Gowda, "Ninety per cent of the IT firms operate out of rented accommodations in Bangalore. If you look at their global turnover, there are bigger firms in Bangalore like Accenture, Microsoft, HP, IBM, etc. None of them have been given a single acre of land. Do they create a similar vitiating din like Infosys?"

Infosys maintains it has not got land at a concessional price. But the KIADB website says, "Cost of the land fixed by the board is on the lower side compared to the prevailing market rates." Why doesn't Infosys buy land from the open market? Flextronics vice-president R.K. Misra explains: "If you settle with the farmers directly, you have to pay the price they ask, but if you go through the government, the farmers will have to surrender to the government's evaluation of their land. It is a hassle-free route."

CM Dharam Singh is clear that any fresh allotment of land to Infosys is going to be difficult. He says: "When an IT firm or any company demands large tracts of land in the green belt area, it is not easy for any government. The situation turns tricky if the land is under active cultivation. The interest of the people using the land has to be taken into account."

Another debate is whether software firms need such huge space. One industry leader said: "Why should anybody build residential facilities for employees, aren't they paid well? Also, why does Infosys want to create all the 25,000 seats (work stations) at one place? Don't they want to expand to other cities? They may want to build clusters, but that can be agreeable only if the social cost is minimal. Also, the cluster model of manufacturing parks suits old economy companies. It suits, say, a Toyota or a Maruti. IT companies are lean when it comes to space. We should not undo our own revolution by speaking of townships. But there is this cultural idea in India of building achal sampatti (immovable assets) for posterity."

Biocon's Kiran Mazumdar Shaw is not as critical but feels that Infosys may be thinking too far into the future: "One has to keep in mind that big companies do not plan for one year, they plan for 50 years. So, who knows, Infosys, given the scale of their operation, may need that kind of space in the future." Hewlett-Packard Global Soft chief Som Mittal had this cryptic comment: "I am sure none of us are into the real estate business. I cannot comment on what the ideal campus size should be for an IT company." Adds Philips Software chief Bob Hoekstra: "We are conservative in our growth and stretch to a limit. Our new campus is 12.5 acres, which is kind of tight. I would have loved double the space, but costs are prohibitive."

The fact that costs are prohibitive and nobody really knows what the ideal size of a new economy campus should be puts the controversy in perspective. If an IT company is asking for government land to create luxury amenities for its staff and clients, then it becomes a sore point. Says deputy CM M.P. Prakash: "If it were China it was another matter."

Senior officials in the government argue that while Infosys has not been able to fully utilise the land it has been allotted, its demand for more has made the government suspicious. For its Bangalore campus, Infosys got 72 acres from KIADB and the government-owned Keonics. According to KIADB land utilisation norms, the floor area ratio (FAR) translates into 100 sq ft for one software engineer. Infosys has 14,465 engineers. Assume the strength grows to 25,000. Even then, only 50 per cent of the land or 37 acres would have been utilised. The 79 acres can easily accommodate 54,000 employees. What bureaucrats point out is that with land being under-utilised, why does Infosys need additional land?

Similarly, the company has asked for 357 acres of land near the new international airport. If one goes by the KIADB norms, this should be able to accommodate 2.5 million employees. Will Infosys be able to generate that kind of employment? That still leaves the question of allotting 845 acres in the Sarajpur area outside Bangalore. The Bangalore Metropolitan Development Authority (BMDA) released a provisional Master Plan on June 2, 2004 (finalised on September 21, 2005). In the provisional plan, Sarajpur was in the agricultural zone. But in the final plan, it had been taken out of that zone. Asks an official: "What do we make of this? Infosys has again announced residential township for its employees on this land...we wonder if KIADB norms permit this."

An official in the industries department is also critical of the "pressure tactics" employed by the IT companies and the way they attack Bangalore's infrastructure whenever they are unhappy. Says he: "Let's admit that the city's infrastructure is inadequate. But the IT companies that speak so much about private-public participation (PPP), refused to pay the 2 per cent turnover tax to fund infrastructure development. They threatened to leave the state. If they had paid their share, it would have been Rs 540 crore, with 200 crore from the state and 200 crore from the Centre. It would have formed a handsome corpus to tackle infrastructure problems."

Deve Gowda's outburst and political compulsions finally foreground the debate on the digital divide in India's Silicon city. The politician that he is, Gowda has been quoting World Bank (South Asia Region) vice-president Meiko Nishimizu's speech of April 2001: "Within Karnataka's borders, the most advanced and the most primitive of man's technologies coexist. It is home to brilliant minds and great wealth, and to illiterate ones and abject poverty. Here we are in Bangalore. Driving less than 50 km out in any direction, we are confronted by this stark divide."

The big question is: Is this divide plain rhetoric for a politician and can we really trust him to bridge it?