The Gentle Giant of Multan wanted to look in on his native Haryana village, but was refused permission. 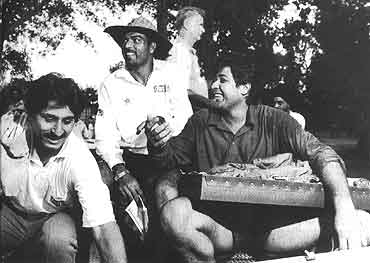 IN India to play for his country, ace Pakistani batsman, Inzamamul-Haq, 23, also known as the Gentle Giant of Multan, is emotional. At Mohali, his eyes brim over in front of television cameras as he expresses his wish to go to Hansi in Haryana where his family migrated from in 1947. "I have to go there. I promised my father I'd bring him pictures. We have no relatives there but we did have a haveli. Dad said it was near a mazaar." In the Taj palace lobby in Delhi, he asks anxiously, "do you think anyone would remember my grandfather Pirzada Zia-ul-Haq by name there? Are there any Muslims left there anymore? Do you think they might have changed the name of the locality? Dad tells me it was called Pirzadgan. Others called it mohalla Moghalpura." The Pakistani cricket board did not permit him to go.

He was not the only one that wanted to go. His captain Rameez Raja, too, wanted to visit his inlaws' relatives in Kamal, his own folks in Jaipur. "I'm from Lahore. My mother-in-law is from Delhi, my father-in-law from Karnal. Don't know about the wife. I've hopefully picked up some of Delhi's famous tehzeeb (courtesy) from her," he says, smiling shyly. "I would be happy to meet my in-laws in Karnal but where is the time or the permission?" Teammate Ijaz Ahmed nods along. Contrary to media reports, he too could not meet cousins in Jalandhar for the same reason.