Into The Devil's Lair

The hunt is on, but the states are harping on same old strategies. More Coverage 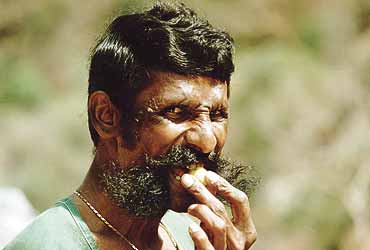 Each major episode of kidnapping or murder now throws up the same old questions: will the Veerappan menace end at last? Will he be caught at all? With sloppiness nurtured as a virtue by the Special Task Force (STF) of both states, an answer in the affirmative is justifiable only if Karnataka and Tamil Nadu change tack. And after former minister H. Nagappa's death in the brigand's custody, the pressure is particularly on Karnataka to catch Veerappan. So much so that the very credibility of chief minister S.M. Krishna is at stake.

The Karnataka government is on its toes, with fresh plans on how to capture Veerappan from his M.M. Hills hideouts. Like in the past, it has requisitioned men and equipment: from Tamil Nadu and Kerala and the Union government. Combing operations have been resumed. The hunt for Veerappan envisages a 3,000-strong force armed to its teeth and equipped with night vision binoculars, thermal sensors and bullet-proof vests. Low-flying helicopters are also to be roped in for the hunt. Says state home minister Mallikarjun Kharge, "We are requesting the Union government for assistance with equipment and manpower required for jungle warfare. Our chief security advisor T. Srinivasulu has been meeting Tamil Nadu STF chief Walter Dawaram. We are serious about this mission...we are not taking any chances." But all these plans are at present only on paper. The hunt for Veerappan has not quite begun. All that Tamil Nadu and Karnataka can offer are words and more words: sparring sessions with denials and counter-statements. Tamil Nadu chief minister J. Jayalalitha's letter to her Karnataka counterpart Krishna said it all: "You will agree that the hunt for the brigand should be our only objective and nothing should stand in the way of this objective, particularly not the ambiguous implicatory responses to provocative questions from the press on the sensitive issue attributed to (home minister) Mallikarjun Kharge." Jayalalitha was complaining about Kharge's insinuation that the Tamil Nadu STF had shot Nagappa in an encounter (see box).