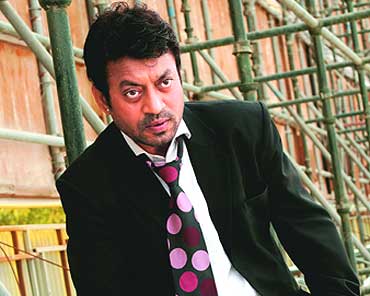 outlookindia.com
-0001-11-30T00:00:00+0553
Movies give you two kinds of people—Supersize Me Superstars. And U, Me aur Hum. The first get forced into permanent posturing under the weight of their stardom; the second show us another way of being. In the constant cacophony of multi-crore deals and endorsements and photo-ops and TV spots, it's easy to forget the real megawatt stars whose faces light up the screen, powered by their own personality, not by relentless PR machinery.

You would have met SV aka Satyaveer, writer of bad detective novels, one of the most alive characters of Hindi cinema in 2007, only if you were one of the shockingly few people who wandered into Manorama, Six Feet Under, first-time director Navdeep Singh's wonderfully atmospheric film noir.

Among the film's high points was leading man Abhay Deol who nailed, with unflinching accuracy, the small-town, small-time Satyaveer. Given the youngest Deol's lineage—nephew of Dharmendra, cousin of Sunny and Bobby, ace practitioners of the snarl-scowl school—it was hard to expect that he would do what he does with such ease: he gets so far in that you see SV, not AD. SV, with his unkempt moustache, and unkempt life, filled with a disgruntled wife, a non-existent career, and an unspoken hankering after unknown excitement.

Abhay Deol ranks high on my list of the real heroes trying to get a word in edgewise in a film industry in a major state of flux. Bollywood today is a place furiously at odds with itself: movie mavens know in their hearts that the age of me-too formulaic films is over. Dead. Gone. But they are not, as yet, ready to fling both baby and bathwater out of the window, clinging to the myth that big-budget multi-starrers will go back to being top of the pops. Will Yashraj's latest overblown folly Tashan help change mindsets? You wish.

Because the real heroes are standing by, waiting to fill the space. Saif Ali is the only one among the Khans who can dissolve his persona enough to be the character: his turn in Omkara was a stand-out, unsullied by starry tics. Even when he does formula, like Race and, yes, Tashan, he manages to invest it with some thought.

I will drop anything I'm doing for Irrfan: even when he is peering down Konkona's blouse (Life In a Metro), he's being curious, not a creepola. And his pitch-perfect Bengali professor in The Namesake can teach a couple of things to real-life Bongs-in-Bollywood. Right from the time he debuted on TV and graduated to film, Irrfan has called attention to himself by not calling attention to himself: he just does the thing, and lets it speak for him.

Arshad Warsi's a joy, even in substandard comic capers. When he does get roles that stretch him, like the near-forgotten Sehar, in which he plays a cop with a mission, he shines. Will anyone give him an honest-to-goodness part where he can put his considerable talents to use?

Then there are Vinay Pathak and Ranvir Shorey. Vinay's supremely irritating songster in Bheja Fry didn't do as much for me as his card-playing gangster in Johnny Gaddar (have you watched anybody pressing his wife's feet with such sly tenderness in Bollywood before?), as well as his mildly corrupt thanedar in Manorama.

Ranvir holds out hope in an array of sparklers—ranging from the younger slothful son of a middle-class Delhi family in Khosla Ka Ghosla, the dead-eyed druggie in Traffic Signal, and the completely convincing wannabe actor in Rajat Kapoor's Hamletian Mithya.

Kay Kay Menon often makes a bad film bearable. And Shiney Ahuja uses subtle shifts of expression with consummate skill. I'm waiting for Sharman Joshi to emerge from the woodwork he seems to have got lost in post Life In A Metro, and for Deepak Dobriyal's (Omkara, Shaurya) next: both actors take you, effortlessly, to the next level.

Not too many choices amongst the leading ladies. There's, of course, Konkona Sen Sharma. Kangana Ranaut can be a serious contender, too, if she chooses her roles wisely. But the only real chameleon among the women seems to be on a permanent sabbatical these days. Tabu's last delicious outing in Bollywood was Cheeni Kum, where she effortlessly made Amitabh's sixty-plus lover pant quite properly at the prospect of getting into her pants. Even in her worst films, there's always been something to watch. Come back, Ms T, all is forgiven.