Interpreting The Verdict: What Led To BJP's Defeat In Rajasthan 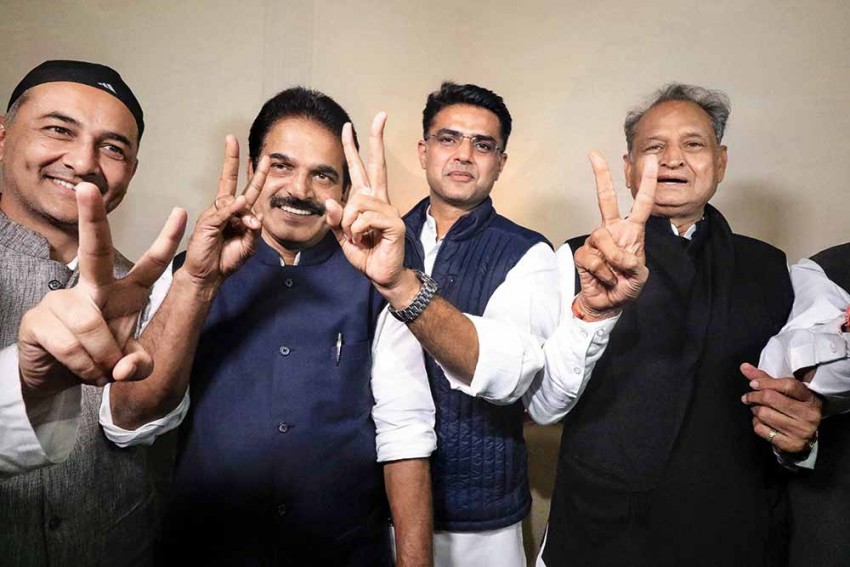 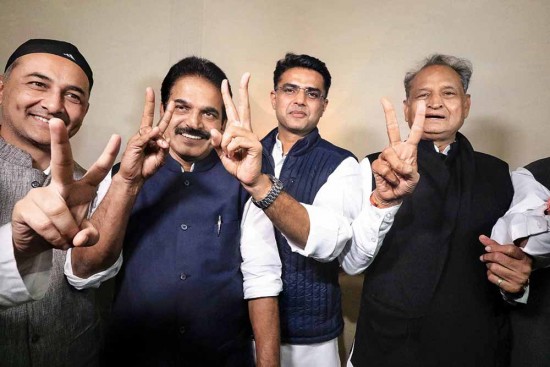 While the assembly election result in Rajasthan once again followed the routine oscillation pattern with the Congress scoring an overall win over the BJP, the victory in itself was rather underwhelming. The Congress and its allies just about managed to scrape past the halfway mark, winning merely 100 seats and securing a vote share of 39.8 per cent, which was just a percentage point more than the BJP (see Table 1). To its credit however, the Congress has polled its highest vote share in assembly elections since 2003. 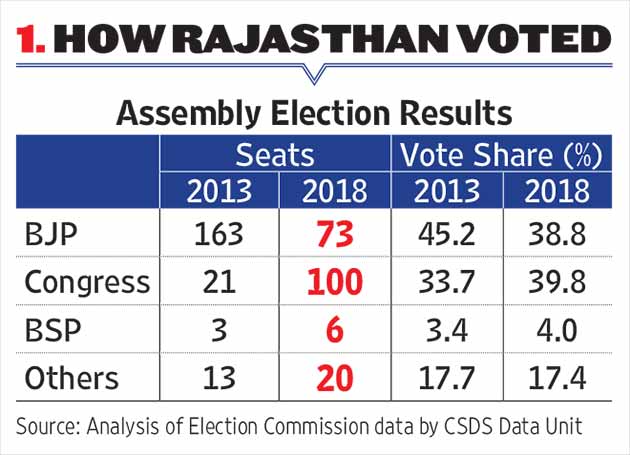 Besides effecting a truce between its two stalwarts, Ashok Gehlot and Sachin Pilot, the Congress also worked out an arrangement with the RLD, the LJD and the NCP, leaving five seats for them. RLD won one seat, while others drew a blank. Independents and others have retained their usual strength in the state legislature.

Many of the senior ministers of the Vasundhara Raje government—Yunus Khan, Rajpal Singh Shekhawat, Prabhulal Saini, Shreechand Kriplani, Arun Chaturvedi, Gajendra Singh Khinvsar, Rao Rajendra Singh and Rajendra Singh Rathore—lost in their constituencies. The Congress did well in the Jodhpur, Jaipur, and Bharatpur divisions and the BJP captured more seats in the Udaipur and Kota divisions while the Ajmer and Bikaner ­divisions have been equally divided between the two.

The most plausible explanation for the defeat of the BJP is the strong ­anti-incumbency reflected in high levels of dissatisfaction with BJP MLAs and the government. Almost one-half of the respondents expressed their dissatisfaction with their representatives and the BJP government. This discontentment was further substantiated by chief minister Vasundhararaje’s dwindling popularity. Nearly one-third of those interviewed observed that they “fully dislike” her (see Table 2).

This negative sentiment emerged because of two major reasons: perception of non-performance and corruption. The BJP government had initiated a number of welfare schemes in the state and almost three-fourths of the people were aware of these schemes, but there was poor delivery of the benefits. The most important issues which ­determined voting choice were high unemployment, price rise, inadequate access to drinking water, lack of development and insufficient acc­ess to health, education, and transportation (see Table 3). What further angered the people was a sense that the BJP Government was ‘corrupt’. More than two-third of the respondents voiced this displeasure.

What is interesting here is that the ‘Modi magic’ and the pro-incumbency sentiment for the BJP government at the Centre failed to compensate for the strong state-based anti-incumbency. More than two-third voters expressed satisfaction with the Modi government’s performance. A similar number reg­arded demonetisation as a correct decision. Nearly four-fifth of the voters ‘liked’ Modi and very few looked upon the central government as ‘corrupt’.  This positive feeling is very well reflected in the response of nearly half of the voters who said that they will vote for BJP in the Lok Sabha elections. Not only this, 70 per cent of the respondents observed that once Modi campaigns, there will be a pro-BJP tilt. However, all these favourable views about Modi and his government could not eventually bail out Vasundhararaje and the BJP in Rajasthan. This tide could perhaps have been checked, if not totally ­reversed, if someone other than Vasundhararaje had been presented as the potential BJP chief minister.

The Congress victory would have been more convincing had Ashok Gehlot been projected as the chief minister of the state.

The Congress benefited from this negative sentiment. But what really helped the party was the campaign launched very early to highlight the failures of the BJP government. Besides, under the leadership of Pilot, sustained efforts were made to galvanise the party worker; something which the Congress has not been taking seriously in the ­recent past. A critical factor which bothered the party all through the election process was its decision not to project anyone as its potential chief minister. This was to prevent factionalism and to present the picture of a united house. But in hindsight, it appears that this strategy has harmed the party. More than two-thirds of the respondents felt that pol­itical parties must declare their chief ministerial candidate. There is a clear preference among Congress voters for Gehlot as CM, who enjoys a 24 per cent point advantage over Pilot. Gehlot also happens to be the most ‘liked’ leader in the state after Modi (see Table4). Moreover, only two-thirds of Congress voters said they would have definitely voted for the Congress had Pilot been the chief ministerial face. On the other hand, four-fifths would have continued to vote for the Congress had Gehlot been the CM face. Based on these responses, one can infer that the Congress victory would have been more convincing had Gehlot been projected as the chief minister of the state. 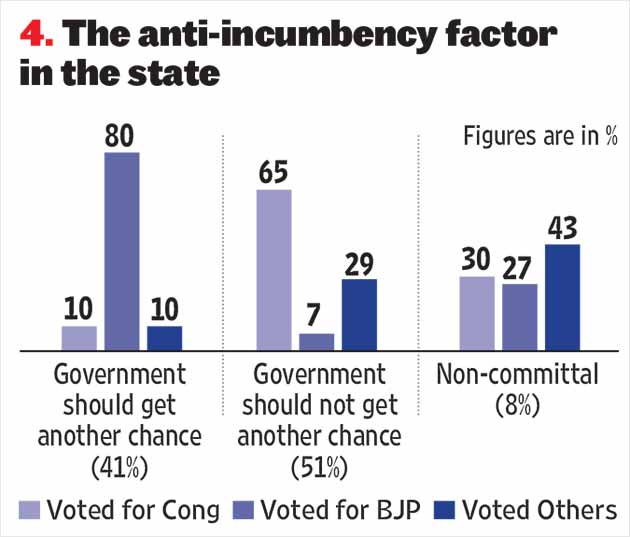 The Congress also failed to fully capitalise on the anti-incumbency sentiment. Even as over half of the voters were found to want the government out as per the Lokniti survey, the Congress ended up securing only about two-thirds of their vote with about one-fourth being cornered by smaller parties and independents. The BJP on the other hand managed to secure four-fifths of the pro-inc­umbency vote.

Shifting Social Base  The 2013 assembly election was a landslide victory for the BJP. Thus a decline from there is not shocking. But what is baffling is a substantial erosion of support for the BJP among those social groups which have been its core supporters—dominant peasant proprietary groups like the Jats, Gujjars, Yadavs and other OBCs (see Table 5). The BJP has made some inroads into the Dalit and adivasi groups which have been traditional Congress voters. The Congress has been the major gainer amongst upper castes and the OBCs. The dissatisfaction among these groups was visible much before the elections were announced. The Rajputs felt slighted by the Raje government on a number of occasions and were yearning for ‘swabhiman’ (self-respect and dignity). Ghanshyam Tiwari fought Vasundhararaje as a representative of the Brahmin community and Hanuman Beniwal led the Jats who are basically a farming community. Thus all the major caste groups were armed against the BJP. 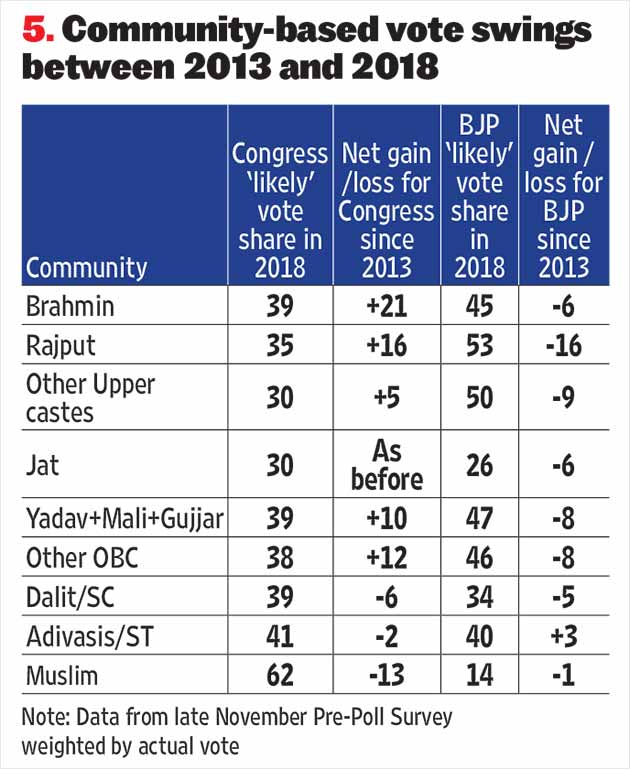 Overall attrition in support for the BJP was also reflected in the preferences of voters across other social and demographic indicators. The BJP experienced a decline of support among the middle and rich classes and also those who are more educated compared to the 2013 election (see Table 6). Surprisingly, BJP suffered less among the non-literates and the poor. The party did well among the Dalits and adivasis. This is also vindicated by the fact that the BJP has cornered more votes among the marginal farmers and agricultural labourers and conversely the Congress has received more support among the big and middle farmers, traders and the businessmen. What it implies is that the image of the BJP as a party of the business and trading community has suffered a dent in these elections. 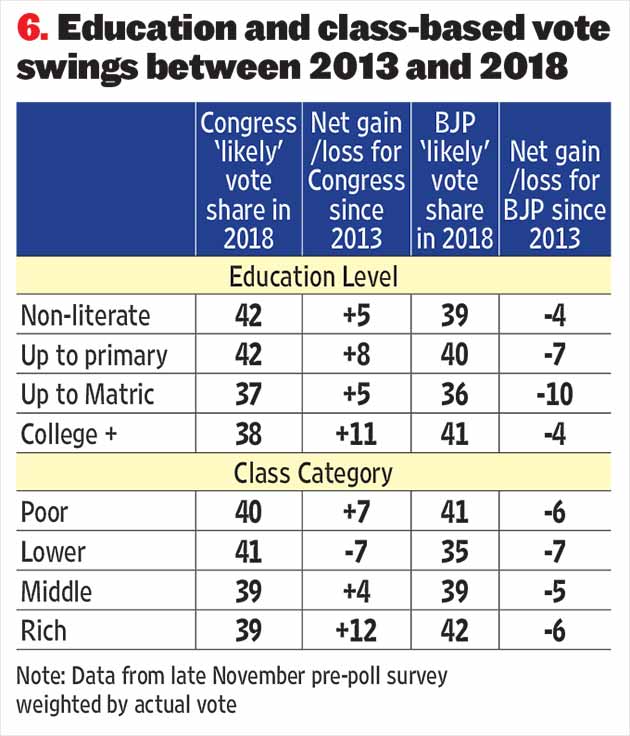 The 2018 verdict confirmed the pattern of regular oscillation between the two major political parties in the state. The outcome has also given strength to the argument that since there is an ideological convergence between these parties; their socio-economic support base also keeps on shifting from one side to another. But what needs to be seen is whether a change in governance will be seen with the change in electoral fortunes of parties. The clarion call given by the Congress during the keenly contested election campaign was ‘ab badlega Rajasthan’ (Now Rajasthan will change). Will that really happen?