In her first major interview to the mainstream Indian media, the Dukhtaran-e-Millat leader reveals the Talibanesque mindset of a woman who's known as Malka-ul-Maut (Angel of Death)... 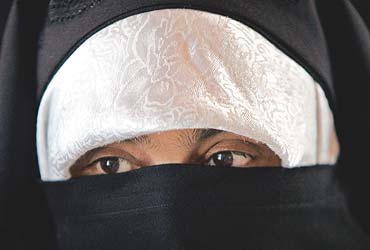 outlookindia.com
-0001-11-30T00:00:00+0553
It is in downtown Srinagar that I meet Asiya Andrabi, leader of the separatist Kashmiri women's group Dukhtaran-e-Millat (Daughters of the Nation). One has heard stories about her spraying paint on women who do not wear burkhas. She is known to have sent burkha-clad activists to burn Valentine's Day cards and posters, raid liquor shops, and restaurants boasting special seating arrangement for couples. Her organisation was banned in the '90s and Asiya was underground till 2004. Meanwhile, she married a mujahideen, currently serving life sentence in an Indian jail. Yet, despite this record, when she takes off her veil, Asiya looks like a middle-aged woman who'd be more comfortable in a kitchen rather than painting anti-America and anti-Israeli placards. In Asiya's first major interview to the mainstream Indian media, she reveals the Talibanesque mindset of a woman who's known as Malka-ul-Maut (Angel of Death) and represents the extreme Islamist fringe of the homegrown militancy in Kashmir. Excerpts from an interview to Aditi Bhaduri:

Tell me about yourself. What made you launch Dukhtaran-e-Millat?
In 1981, I started a school. I gathered women—it was a door-to-door campaign. I wanted them to know the tenets of Islam and the status accorded to women. From one school, we went on to have units in six districts of the Valley. In 1987, we called upon women to come out and protest peacefully against the portrayal of women in the nude. But I also questioned the accession of Kashmir since I strongly believed that Kashmir is not a part of India. So, my office was raided and sealed. The police had an arrest warrant for me. I went underground for 21 days.

When I resurfaced in '88-89, the anti-India movement had started. We were the first to join that movement both morally and politically. But as far as the militancy was concerned, we gave a call to our men that this was their job and not ours. As far as my ideology was concerned—if the men want to fight India militarily, they could do that, we women would be with them—we would look after their houses and their children. But practical military action cannot be carried out by women. Then, in 1990, our organisation was banned and in 1993 I was forced to go underground. Meanwhile, I got married to a mujahid with a militant organisation fighting against India. I was underground till 2004.

What kind of support was your organisation providing to the militants?
It was moral support that we gave to the mujahideen. We mobilised the people and told them of the problems faced by the Kashmiris. How India has occupied it illegally and how we must treat India as an aggressor. This is something we have to educate the people about and this is the work our women were doing.

So, the strong belief of Dukhtaran-e-Millat is that we want the whole universe to be governed by the laws of Allah the Almighty. Based on Islamic teachings, we are fighting against India. I am telling you that this is Islam, this is my religion. I don't believe in Kashmiriyat, I don't believe in nationalism. I believe that there are just two nations—Muslims and non-Muslims. I am a Muslim; I am least bothered whether I will be called a Kashmiri. I'm Andrabi, I'm from the Syed dynasty. I'm not actually Kashmiri, I'm Arab, my ancestors had come from Arabia to Central Asia. I believe in Islamic nationalism.

This means you don't believe in nationalism, but in the ummah (the concept of a global Islamic community)?
Yes, very much so.

Don't you think that that is a big farce now? And what would be your contribution in creating an ummah? You can see how ineffective even the Arab countries are in solving the problem in Lebanon...
You know there are hundreds and thousands of movements. It's not only Dukhtaran-e-Millat which is working in this field. There are movements working locally, everywhere. But they should be united. Islamic teaching says there should be one ummah and we have one leader—Prophet Mohammed. The ummah is one unit and we are working on this. This is not just the job of Asiya. It may not be completed in my lifetime. It may be Asiya's son or grandson. It is a goal which has to be achieved and it may take time, it may take hundreds of years.

This, then, is your long-term goal?
Yes, this is a long-term goal. And the short-term goal is that we want accession with Pakistan. Not with the idea of Pakistani nationality but inshallah Kashmir will become part of Pakistan, if not today, then some day, it may take decades. However, I do not call myself a Pakistani but a Muslim. Maybe if one day Kashmir will be liberated, I will not be in Pakistan, but somewhere else—part of the Muslim ummah.

What is the approximate numerical strength of your organisation?
I can't tell you that for security reasons. We have a president, I am Dukhtaran-e-Millat's president, we have a general secretary and then we have our central Shura in which we have two members from each district. Then, there are district presidents and district councils. We also have a publicity secretary.

And you have links with other similar organisations outside India?
Yes, we have links with those who are close to us as far as our ideology is concerned. We have interactions with them and regular contact with them. We can't travel outside Kashmir and we don't have passports.

Under the PDP government, people feel that there has been a change for the better. Do you feel you have become irrelevant?
I don't care whichever government is in power. I don't think there is any difference in governments—PDP, Congress or the National Conference. Because they are puppet governments taking orders from Delhi. So, I don't think that there will be any change.

People accuse you of being a RAW agent. What would you say to that?
Who has said this? Where have you heard this? I have said that I am against India, how can I be a RAW agent? I am neither an Indian nor a Pakistani agent. I am not anyone's puppet.

Off On A Hike