He was once the 'king of pop'. Today, he's in danger of becoming the world's most famous paedophile. 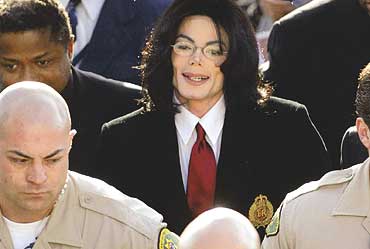 outlookindia.com
-0001-11-30T00:00:00+0553
Once, he was the world's most famous entertainer. His albums sold millions of copies. He was adored on every continent. Money flowed through him like water. Now, Michael Jackson is a sad, twisted shadow of himself, a victim of his own myth-making and to many, a known paedophile and potential sex offender.

For more than three months now, the man known as "the King of Pop" has been on trial in this small city in California's central wine-growing district on 10 charges related to the sexual abuse of a 13-year-old boy. When Outlook went to press, the jury of eight men and four women were still deliberating on a verdict.

The road to what many consider the trial of the century has been long, fascinating and occasionally repellent. Child molestation accusations against Jackson first began to appear in the early 1990s. He was investigated by the police for a particular allegation involving 13-year-old Jordy Chandler but the case had to be dropped when the boy's family accepted a $23 million payoff from Jackson. 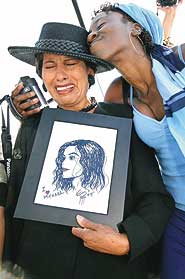 The singer has always contended that he—like many other black heroes in America—is resented by white people for his success and the child abuse rumours stem from that. He also says his former record company, Sony, might be involved in some conspiracy to gain control of his song catalogue, which includes music by the Beatles and is worth a billion dollars.

But the molestation charges persisted, and there was another payoff—to a maid at the singer's Neverland ranch whose son was allegedly molested. The Santa Barbara County district attorney, Tom Sneddon, who'd been trying to prosecute Jackson over Jordy Chandler, never stopped believing that he'd one day manage to lay charges against the singer.

Sneddon's latest and best chance came with the release of a video documentary in 2003 by British journalist Martin Bashir. Called Living with Michael Jackson, the film was a fly-on-the-wall look at Jackson's private life, and it included a bombshell or two. On two occasions, the former king of pop admitted to sleeping with children. We even got to meet one of his bed partners—13-year-old Gavin Arviso, a youngster who met Jackson when he was suffering from cancer.

The duo cavort on camera, hold hands and then Gavin puts his head on Jackson's shoulder during an interview. Investigators in Sneddon's department were said to have punched their fists in the air in glee when they saw the video.

But what the timing of that prosecution and Gavin allege happened after the film is bizarre, almost unbelievable. For, it was then, according to Sneddon and Gavin, that Jackson took the 13-year-old into his bed and molested him sexually.

Speaking on the witness stand, the boy, now a 15-year-old teenager, described his ordeal. He said he'd been given pornography and alcohol by Jackson. Then, Gavin said, confirming an interview with the police that was videotaped and shown to jurors in the court room, Jackson had masturbated him to orgasm.

At that point, it seemed that the singer's defence lawyer, Thomas Mesereau—known in California as the "attorney to the stars"—had an impossible task, so convincing was Gavin. But Mesereau proved that he was worth the estimated $10,000 a day that he was charging Jackson. "What he (Mesereau) did was classic," says former prosecutor Susan Filan. "He attacked Gavin Arviso's credibility, suggested that his mother had coached him to lie, that the family was after Jackson for his money. The cross-examination was very, very tough."

But then the prosecution went one better. District attorney Sneddon won a ruling from Judge Rodney Melville that other allegations of child abuse could be raised during the trial. The intent, Sneddon argued, was to show that Jackson was a serial paedophile with a history of grooming young boys for sex. So, the court heard of five other cases involving the alleged molestation of children.There was powerful testimony from a now 24-year-old Christian lay preacher whose mother was the maid at Neverland who'd taken money from Jackson to drop abuse allegations. There was Home Alone star Macauley Culkin, who has always denied that his close friendship with Jackson included sex but has a troubled life that could be seen by jurors as indicative that he'd been abused as a child. 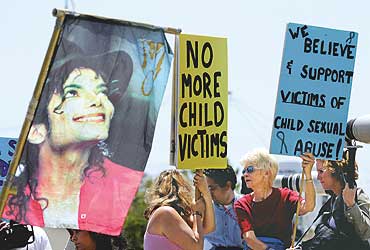 Then there was June Chandler, Jordy Chandler's mother, who disclosed that she'd not seen her son since winning the $23 million settlement. The boy lives with his father and refuses to meet his mother. She admitted to allowing Jackson and Jordy to sleep together. Sobbing, she told the court, "If I could have him back, I'd do it differently, I'd refuse the money, I'd go to the police."

Defence attorney Mesereau did his best with each witness, and played up Culkin's denial of inappropriate sexual behaviour, but a horrifying pattern was emerging—that of a famous and wealthy man who, at the very least, spent far too much time with children, and quite possibly molested them.

The singer's private life is unusual in more ways than one. In Living with Michael Jackson, he's shown dangling his newborn baby son from the balcony of a German hotel. Also, Jackson's two older children, Prince Michael and Paris, wear masks whenever they're on camera. This, says Jackson, is to protect their identity from a paparazzi onslaught.

However, as the respected writer Maureen Orth points out in a riveting series of articles in Vanity Fair magazine, it's very likely that the children are masked because they are probably of pure white blood. In other words, she alleges, Jackson's aversion to his Negro blood led him to have someone else father his children. Orth cites Jackson's extensive plastic facial surgery, designed to modify his African features, and his ever-whitening skin, to suggest that he hates his own race.

Media coverage of the trial has been intense with more than 2,000 journalists and others accredited to enter the Santa Maria court premises. Some 20 TV trucks transmit daily coverage of the sordid proceedings. "It's a circus," says University of California media studies professor Toby Miller. "These are like the last day of the Caesars. The fall of imperial Rome was marked by huge gladiatorial shows, bread and circuses. One could argue that this country has a similar fin-de-siecle malaise that manifests itself through things like the Jackson trial."

Others are more sanguine. Former prosecutor Susan Filan says highly publicised celebrity trials are good for American justice. "It shows that we in the law are working hard, not having fun, that issues are complicated, not black and white, and that our system of law is the best in the world. That's the bright side of the Jackson trial. The dark side is that come what may, a lot of people have been shown to be deeply troubled and disturbed here, and that's never a pleasant thing to contemplate."