Innocence For The Insensate 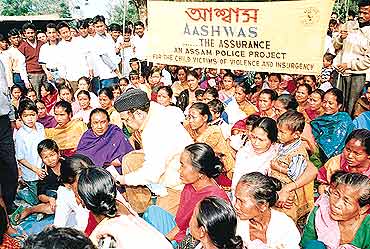 outlookindia.com
-0001-11-30T00:00:00+05:53
A girl hears the news of Mother Teresa’s death on television and rushes to her grandfather, "Who killed Mother Teresa?" Grandpa is quick to assure her that she died of old age. "No, no," the girl says, "someone must have killed her. How can she die on her own?" Having grown up in strife-torn Assam, the girl was not yet aware that something called ‘natural death’ was also a part and parcel of existence. This real-life example often quoted by H.K. Deka—a Sahitya Akademi award-winning poet who also happens to be the state’s director general of police—is not an isolated case.

Children growing up in Assam in recent years have been brought up on gruesome headlines of militant strikes and counter-attacks by security forces. Two decades of bloodshed brought about by secessionist movements and ethnic clashes have orphaned or traumatised thousands of boys and girls. Deka, shaken by all that he has witnessed in these years, has started a programme to sensitise the Assam police as well as the public to the fragile emotional space inhabited by children in violence-prone areas.

Initiated in collaboration with UNICEF and launched two years ago, the programme called ‘Aashwas’ (assurance) aims at developing and creating a humane approach towards children and, most importantly, towards those living in conflict situations. One of the things Aashwas does is to identify the families of the victims of violence and call in experts to help in their socio-psychological rehabilitation. It also attempts to create public opinion against all kinds of violence.

Says Deka: "Our aim through Aashwas is to combat the tendency in our society to accept the culture of violence without any protest." It’s easier said than done. As Aashwas’ nodal officer, Deputy Inspector General of Police Bhaskar Mahanta, says: "We have divided the project plan into four: survey, training, awareness generation and rehabilitation of victims. Given the magnitude of the problem, this is a huge task."

A baseline study has already been conducted. Expert trainers selected by the National Institute of Public Cooperation and Child Development (NIPCCD) have so far trained 239 sub-inspectors in community-oriented and child-friendly policing. In addition, six sensitisation campaigns in violence-affected districts have been conducted to make people aware of the need to make society violence-free. The Assam police have managed to give financial aid to 252 children of violence-affected families through the New Delhi-based National Foundation for Communal Harmony.

Aashwas has identified for its operations villages in six districts of the state where there is a history of ethnic or militant violence. Sensitisation campaigns have already been conducted in Rangia, Namrup, Dhupri, Sivasagar and Nagaon subdivisions.

As a follow-up to the sensitisation programme in Rangia, a camp to train rural youth for self-employment was held under the aegis of the Tribal Welfare Society. About 120 youths took part. Another awareness campaign was kicked off at Jorhat Trade Fair 2002 where an exhibition stall was set up, apart from a series of functions on child rights.

The results have been heartening. In rural Assam, common citizens, and children in particular, now view policemen through more friendly bi-focals. This has naturally boosted the morale of the force. Says NIPCCD regional director P.K. Bhattacharjee: "The feedback from policemen who have undergone training with us suggests that for the first time the men in uniform are feeling one with the community." May the oneness prevail.

Out Of The Sheath?

Nitin A. Gokhale Making A Difference