The Globus megastore stands unashamedly for the good things in life 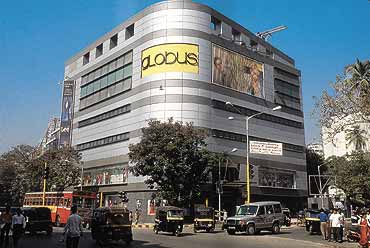 outlookindia.com
-0001-11-30T00:00:00+0553
In a city where 'space' is what they call the sky sometimes, 'apparel stores' are never the place where you can lose an expensive wife. She will always find you in the mirror, alongside her. Globus, however, is different.

With over 30,000 sq ft of space spread over four levels connected by untiring elevators, Rajan Raheja's mammoth retail store stands unashamedly for the good things in life, on Hill Road in Bandra where all streams join a sea of humanity that is buying something somewhere all the time, as though the banks will shut tomorrow forever. It's this "catchment area", as a marketing mind puts in, that inspired Globus, which threw open its glass doors this November. Mumbai's Globus is the fourth in a chain that will expand to about 25 stores in the next five years, realising an investment of about Rs 150 crore. Chennai has two Globus stores, a 40,000 sq ft giant in the busy Pondy Bazar area and the other one a 16,000 sq ft arcade in Adayar. The first Globus store opened in Indore in the middle of 1999 after there was clear evidence of a rising trading class with impressive purchasing power.

Headquartered in Mumbai, it was inevitable that Globus would 'come home' one day. And it has proved its own marketing theories right. On some days during the Diwali festival, the store consistently registered a footfall of over 10,000. On average weekdays, it receives over 2,200, which goes up to 3,000 in the weekends. Now, Christmas is breaking into the store slowly. Santa's already standing in welcome with some pretty, tall mannequins for company. The deer smile from the walls. Globus is in a chocolate-cake state of mind. That's possibly one reason why boyish Globus CEO Ved Prakash Arya says we can't leave without taking a good, close look at the pastries in the café.

The small, stylish café—in a cosy corner on the top level—is where in the evening boys and girls sit and talk about nothing of national interest. Graver-looking families too sit down "to decide on the purchase", as Arya imagines. "Why should we let them leave the store when they have some more decisions to make?" The pastries and drinks are reasonably priced, with most items not exceeding Rs 30. "We are not in the business of selling cakes. We just want to give the customers a complete experience," he says. The store itself is affordable. Top wear starts at around Rs 195-245. Trousers range from Rs 545-1,200. Most salwars don't cost more than Rs 1,900. Jackets come at Rs 4,000. "The accent is on the youth," Arya says, "those between 15 and 40". That should be pleasing to some people who believe that if you can get a stroke, you must be old. Out there in Globus, youth runs a little longer. Arya continues, "While we have a good range of conservative wear, we pay a lot of attention to hi-fashion". There are girls' tops that sling on a single strap, like a bag, in an admittedly inept fashion description. There are blouses that have holes at the back. There are clothes that are tinier than most. And there are T-shirts with something called reflectors lining them, which "glow in the dark". May help these fine young men when they cross the road in the dark or perhaps it's the only way young fellows can perform self-reflection. Whatever the utility of extreme fashion is, Globus has it in its stores.

When Arya is in the store, he doesn't sit on the babu's high horse. He jumps up from his seat when he finds a customer unattended. "Can I help you?". The customer passes through the good-mannered seller without knowing this is the chief who was asking the question. This kind of hands-on involvement has taught Arya many interesting things. "Girls come with their parents to the store because sometimes it's a safe bet. If they are picking up something bold, they need immediate approval from the elders. Boys come with other boys." Some of them go back glowing of course. Understanding people is one compulsion with Globus. Before opening, it conducted a study around a radius of 3 km, to find out what people in Bandra had in their closets, how many clothes and what they wore and when? The store's inventory has taken into account everything that it learnt from such studies.

Along with the best of international brands, the store also showcases its own in-house brand 'Globus'. This brand covers trendy clothes for men and women "who are young at heart". The easily upmarket collection that keeps in mind the mood swings of the fleeting segment is also pegged at reasonable prices. While men have many things to choose from, to Globus the women who walk in are extra special. The Indian and western wear at Globus pays tribute to all that she wants from the so little that she has to spare. In 9-month cycles, from thought to cloth, the store's design team keeps working on ways and means to impress. "We have a full-fledged in-house design team. We don't outsource anything at the concept stage," Arya says. The other in-house brand from Globus is F21, which is concerned with a level of fashion consciousness that is a notch higher than usual. Closer to experimentation than clinical functionality, this is a bold range which some mothers who still have control over their daughters will perhaps take more time to approve.

Arya says the real estate—the building that is Globus—"was meant to be a retail store". It's not a structure that hurriedly morphed itself into a store. It has an exquisite modern parking facility and enough space and design to expand and adapt. And it has come a few months before the day when many malls will rise against the Mumbai skyline. Some theorists believe malls will swamp exclusive retail stores. "I don't agree with the theory," Arya says with a confident smile. How does it matter, he says, if people peep in nervously into your store but don't buy anything. Arrest them and sell something to them, is what Globus tries to do. And on a lazy Monday morning, minutes after the store opened there are many people walking around, some even dancing to the all-pervading muted rock that's playing.

Recession is something, they believe, is happening outside Globus.