"Indo-Israel Ties Should Not Be At The Expense Of Palestinians"

Saddled with running a bankrupt Palestinian Authority, the Hamas PM faces pressure from the Israeli President's call for a referendum on the right of Israel to exist alongside Palestine. 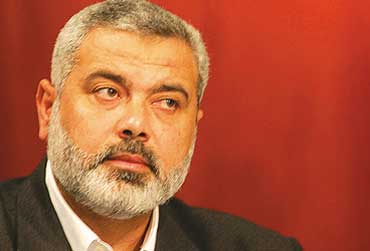 outlookindia.com
-0001-11-30T00:00:00+0553
Palestinian prime minister Ismail Haniyya is an embattled figure: the world doesn't want to talk to him nor provide financial assistance until his party, Hamas, recognises the right of Israel to exist. Saddled with running a bankrupt Palestinian Authority, he also faces pressure from President Mahmoud Abbas' call for a referendum on the right of Israel to exist alongside Palestine. Pinhas Inbari met Haniyya in Gaza. Excerpts from an interview:

Do you have reservations on India's increasingly closer ties with Israel?
What's important is that this tie shouldn't be at the expense of the rights of Palestinian people.

What's your position on the Kashmir issue? Do you find similarities between Kashmir and Palestine?
We have our Palestinian government that takes care of issues inside the Palestinian borders. But, at the same time, we're in favour of removing occupation from all lands.

Iranian president Ahmadinejad wants to wipe Israel off the map. What do you say?
It's not our business. What concerns us is that our people should have their freedom and enjoy stability.

What's your position on the two-state solution—Israel existing alongside an independent Palestine?
We first want Israel to recognise the Palestinian state and confirm that there are legitimate rights of Palestinians. When this happens, we shall spell out our position.

What do you mean by legitimate rights?
It means recognising that Palestinians have a right to establish an independent state with full sovereignty and with Jerusalem as its capital.

Europe and the us have stopped financing the Palestinian Authority. Do you fear it could go bankrupt?
Not only America and Europe, but also Israel has besieged the Palestinians. For three months, they haven't paid the $220 million that is due to us. Certainly the continuation of this siege may lead to dismantling of the Palestinian political order. This could have negative effects on the entire region.

But taxpayers in the US and Europe won't approve of their governments financing an entity (Hamas) that has in its charter the destruction of Israel. They at least expect Hamas to recognise Israel.
Europeans and a large part of the American people don't agree with the positions of their governments. Moral values don't permit them to accept the siege of a people as a punishment for Hamas winning elections. Also, we won with our programme in the elections. The programme is clear: we want to establish an independent Palestinian state in the West Bank, Gaza, and Jerusalem.

Are you prepared to provide a safe environment for Israel to effect a unilateral pullout?
This (unilateral pull out) will not end the dispute. If they want to pull out of any part of the West Bank, we are not going to hold them back, we aren't going to urge them not to. Whoever wants to go, let him go. The people want to end the occupation, to have peace of mind. But the region can have long years of stability only if the Palestinian people get an independent state with full sovereignty, and prisoners are released.