India's Suez: Is It Ecocide?

A sea canal between India and Sri Lanka that will cut navigation time by 21 hours has the unstinted support of TN politicians. But is it such a good idea, ask experts. 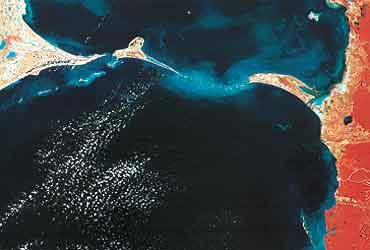 outlookindia.com
-0001-11-30T00:00:00+0553
Every Tamil politician is upbeat about it. Billed as India’s Suez Canal, it is projected to reduce navigation time between India east and west coasts by 400 nautical miles. Ships will save 21 hours one way and will not have to circumnavigate Sri Lanka. The economic benefits would be immense. Reason why the Sethusamudram Ship Canal Project (SSCP), which envisages excavating the shallow sea between the Palk Bay and Gulf of Mannar—44.9 nautical miles of it—and creating a canal linking India’s east and west coast, is being actively pushed in Delhi by the dmk and its allies.

No one seems concerned about the disastrous environmental costs involved and the virtual wiping out of India’s biologically-richest coastal region. In human terms, the livelihood of five lakh fisherfolk spread across 138 fishing stations along the five coastal districts will be severely hit.

A canal linking the east and west coast was first suggested in 1860 by A.D. Taylor, a British commander of the Indian Marines. Today it is high on the priority list of the dmk and its allies. In fact, the Sethusamudram project found its way into the UPA government’s Common Minimum Pro-gramme. The dmk also holds two crucially relevant ministries—Shipping (T.R. Baalu) and Environment and Forests (A. Raja). On September 2, the Cabinet Committee on Economic Affairs approved a special purpose vehicle, Sethusamudram Corporation Ltd, to complete the Rs 2,000-crore project. By September 7, the mandatory public hearings on the Environmental Impact Assessment (EIA) were under way in five coastal towns under the supervision of the TN Pollution Control Board.

The 10,500 sq km Gulf of Mannar (GoM) area, along which the canal is proposed, was notified as a Marine National Park in 1986. It is home to over 3,600 species of plants and animals—including 117 species of corals and chanks (conch), endangered mammals like dugong and all five varieties of sea turtles. In 1989, it was declared a Marine Biosphere Reserve. In 2002, the Global Environment Facility (GEF) of the UNDP, with support from the TN government, established the Rs 40-crore GoM Marine Biosphere Reserve Trust in Ramanathapuram.

To quote a GEF report: "Of the 2,200 fish species in Indian waters, 450 species (20 per cent) are found in the Gulf of Mannar, making it the single richest coastal area in the Indian subcontinent in terms of fish diversity." The GoM is home to 21 islands which harbour fringing coral reefs that contribute to the gulf’s biodiversity. Kurusadai Island, a biologist’s paradise, harbours representatives of every animal phylum known (except amphibians).

All this now stands threatened. Dredging work over 45 nautical miles in the Palk Strait and Adam’s Bridge terrain will result in 85 million cubic metres of spoil. According to the Nagpur-based National Environmental Engineering Research Institute which submitted its EIA report in May 2004, "there is hard strata under the soft sediment and may require blasting if the strata encountered during dredging were to be hard rock". Notes R.S. Lalmohan, former principal scientist with the Centre for Marine Fisheries Research Institute (CMFRI), Mandapam, Ramanathapuram district: "Since marine organisms are extremely sensitive to sound, using explosives will spell mass marine death."

Though the EIA’s executive summary speaks of minimal ecological damage, closer examination of the report tells a different story. Page 6.12 says: "Because of the deepening of the canal, the course of water currents may be altered. Current-related sediment transport might level up, bury or elevate certain locations. This would play havoc on the benthic (sea-bottom) animals." The EIA says during construction there’ll be "increase in marine turbidity" leading to "toxicity in the water column, reduced sunlight penetration and available oxygen" and this will "affect planktonic life". It also warns of "settlement of resuspended sediments" leading to the "smothering of biota and deposition of silt on free-swimming animals," resulting in "loss of bottom habitat, shell fisheries and fishery food resources". This means the stifling of coral beds and eventual genocide of marine life. According to an M.S. Swaminathan Research Foundation publication on the biodiversity of the Gulf of Mannar, "Coral reefs with their myriad shapes and crevices offer a variety of cover to animals."

Except at the first public hearing in Nagapattinam, where the fisherfolk were allowed to register their protest, the meetings in Thiruvarur, Pudukottai, Tuticorin and Ramanathapuram ended in chaos. Scientists, economists, environmentalists and human rights activists have expressed reservations over the project. According to V. Naganathan, Wildlife Warden of GoM Marine National Park, an area of 560 sq km is protected under the Wildlife Protection Act, 1972. The canal falls right in the middle of this area, reason why the moef could shoot down the project.

Not surprisingly, the minister for environment and forests A. Raja is concerned. His ministry feels the coordinates of the Sethusamudram canal should be defined to ensure it does not run through the national park. In its present shape, it certainly will. Speaking in Thanjavur, Raja said his ministry will independently assess the plan after the implementing agency submits the project report. However, shipping minister Baalu has belligerently advocated the project. dmk president M. Karunanidhi has even offered an ethnic twist: "The Sinhalese are conspiring against the project; Tamils have to defeat their designs." Those opposing the project, he says, "are being instigated by the Sinhalese government and Sinhalese businessmen."

Even the projected economic gains are disputed by experts. Comparisons with the Suez or Panama Canal are deemed inept. While Suez Canal transports 14 per cent of world trade and reduces navigation time by 24 days, the projected time saved by cutting through Adam’s Bridge is 21 hours, and the trade that may accrue will not be commensurate. K. Raghupathy, chairman Tuticorin Port Trust, the nodal agency for the SSCP, said: "Projected annual traffic through the canal will be 3,000 ships of 40,000 metric DWT. Colombo will lose 70 per cent of its container traffic." But this projection may run into several hurdles.

According to Meche Lu and Mark Chernaik, US-based scientists with Environmental Law Alliance Worldwide, who studied the EIA report: "Unlike the proposed SSCP, the Panama and Suez canals are bound by land, not shallow waters. Whereas it is physically impossible for ships to ground themselves while transiting these canals, it would be entirely possible for ships transiting the proposed long and narrow Sethusamudram canal to be grounded."

Adds G.V.K. Unnithan, former resident naval officer at Ramanathapuram, "Half the time gained will be offset by administrative, operational delays associated with waterways the world over (two hours). Embarkation and disembarkation of pilots will result in further waiting time. Besides, ships will have to travel at a snail’s pace for 140 km at 8 knots per hour. Even minimal pilotage charge of $1 per metric tonne with an equal amount as toll will make it costlier than the fuel expenditure (of US $ 100 per hour) incurred if a vessel circumnavigates Sri Lanka."

Lalmohan feels, apart from environmental costs, the canal will not be sustainable on geo-morphological grounds. "In Adam’s Bridge, the sand dune formations, like those in a desert, shift constantly. A canal will get filled within a month because of the shifting sands. Left intact, these dunes are barriers that protect the hinterland from oceanic forces. Besides, the area is prone to tsunamis (waves triggered by quakes) and cyclones every November-December. The December 1964 cyclone wiped out the entire island-town of Dhanushkodi." Even if the canal becomes operational, maintenance dredging will ensure unpredictable recurring expenditure "which’ll keep contractors and their political masters happy".

But the Centre, prodded by its alliance partners in Tamil Nadu, seems hell-bent on implementing the project. As environmental lawyer T. Mohan puts it, "Just like the rightwing NDA government was obsessed with the river-linking project, the UPA government is obsessed with the Sethusamudram idea. Both are fundamentally disastrous." So what’s the last word on Sethusamudram? Only time and tide will tell....