1,00,000 tonnes of toxic waste a year, India's a health disaster waiting to happen 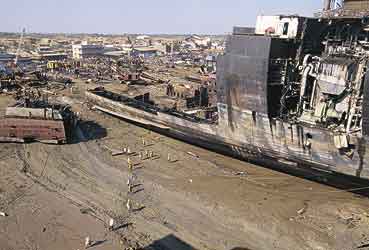 outlookindia.com
-0001-11-30T00:00:00+0553
Lethal mercury from Spain and Russia, carcinogenic asbestos from Canada, defective steel coils, tin plates and arsenic from the European Union, old ships containing toxic wares from the UK, electronic junk from the US and Singapore, PVC and plastic wastes from the US and Denmark, toxic waste oil from the Middle East, zinc ash and used lead batteries. All the ingredients needed for a deadly cocktail, but more shockingly, a list of the toxic refuse dumped in India, year after year, by the West.

Without a doubt, India is quickly becoming the world's favourite dumping ground for hazardous substances and wastes. Despite the 1989 Basel Convention which bans transboundary movement of hazardous wastes—to which India is a signatory —and our own Hazardous Waste (Management and Handling) Rules, 1989, which were amended only last year, estimates by independent ngos show that India continues to allow illegal import of nearly 1,00,000 metric tonnes of toxic wastes annually. Ninety per cent of this comes from the so-called developed countries.

So rampant is the dumping of toxic wastes on Indian soil that some months ago the Supreme Court issued a stringent set of directives to the Union ministry of environment and forests (MOEF) to plug the loopholes in domestic legislation. The SC has also given the Central Pollution Control Board (CPCB) a watchdog role in monitoring the quantity and types of wastes entering Indian shores. Admits N. Hosabettu, director, Hazardous Substances Management Division, MOEF: "Despite restrictions on imports of hazardous wastes, people have found ways to sidestep the rules. It's true that large quantities of toxic waste are being imported illegally. We are now planning a study to ascertain how much."

So, why does India import waste? The main reason is economic: nondescript Indian importers recycle hazardous waste to extract valuable metals like zinc, lead and brass, which are then used to meet domestic demand. For instance, until zinc waste imports were restricted by the Indian government in 1997, zinc recovered from imported zinc ash and residues provided Indian industry with a steady source of cheap raw material. Or take the huge Indian market for old ships, which are dismantled to recover steel. The shipbreaking industry employs about 50,000 workers, mostly at port towns like Alang in Gujarat. When dismantling end-of-life vessels from countries like the UK and the us, workers are regularly exposed to highly toxic material such as paint fumes, asbestos dust and lead. In November last year, Greenpeace India raised a hue and cry about Genova Bridge, an old British vessel carrying toxic waste that was being dismantled at the Alang shipyard.

The import of hazardous wastes is particularly dangerous because the Indian recycling industry (mostly in the unorganised sector) is neither equipped to dispose of toxic materials in a safe manner nor aware of the grave dangers posed to health and environment. For example, residues of lead, zinc, mercury, arsenic and asbestos are left in open landfills where they can easily pollute the atmosphere or mix with groundwater, while toxic scrap left after dismantling ships and electrical appliances, if not incinerated at the right temperature, can release poisonous gases into the atmosphere.

In the past few years, new Indian rules have made it tougher for importers to bring in metal wastes freely. "The recent SC guidelines have plugged the various loopholes in Indian legislation," says lawyer Sanjay Parikh, counsel for the Research Foundation for Science, Technology and Ecology, an ngo that filed a petition in 1997 alleging that dumping of toxic waste by the West had reached dangerous proportions. However, he warns that there are still several ways by which toxic wastes make their way into the country, like toxic waste oil from the Middle East.In a recent incident, 41,000 tonnes of waste oil was released from a container freight station at Ludhiana. "Much of this is either mixed with lubricants used in automobiles, or dumped on land," explains Parikh.

Meanwhile, the dumping of toxic substances not included in the Basel list continues freely. With the West phasing out toxin-producing substances in manufacturing and adopting cleaner technologies (because of the high cost of disposing toxic residues), potentially hazardous elements such as mercury, asbestos and arsenic are being freely exported to developing countries, along with the obsolete technologies. India, with a large manufacturing sector that uses these chemicals, is a favoured destination.

Take, for instance, the case of mercury. In developed countries, mercury use is strictly controlled since it is extremely poisonous. Mercury contamination of water can lead to permanent lung and kidney damage, neurological disorders and birth defects. India, meanwhile, saw a sixfold increase in imports of the substance between 1996-2002. Mercury has over 3,000 uses including in the manufacture of caustic soda, fluorescent lamps, pesticides and electrical fittings. "India currently imports 1,858 tonnes of mercury and mercury compounds annually, and we have no information about how 99 per cent of it is used in Indian industry," says Chandra Bhushan of the Centre for Science and Environment (CSE).

The other substance freely imported is asbestos. Known to be hazardous—inhaling asbestos dust on a sustained basis causes cancer and severe respiratory ailments—its use has been banned by 36 countries. Ironically, despite an August 2003 statement by the health ministry about its deadly effects, India continues to import more than 1.2 lakh tonnes (mostly from Canada, where asbestos use is banned) to feed its Rs 1,000-crore industry. "It is high time India banned the use of asbestos. We must be selective about what raw materials we use when the health hazard is so evident," says ex-Pollution Board chairman Dilip Biswas.

Then there's the growing problem of electronic waste (e-waste) generated from discarded PCs, electrical appliances. A study by the ngo Toxics Link found that in one month alone, 30 tonnes of e-waste entered India via Gujarat. Given that a single computer is made of more than 1,000 toxic materials, including cadmium, PVC, mercury and lead, e-waste dumping poses a serious health hazard. "Computer models get obsolete rapidly in the West. An estimated 300 million computers will be obsolete in the US alone by next year," informs Ravi Agarwal, director, Toxics Link. Now that China has banned e-waste imports, India is the biggest recipient of old computers.

Many of these come in as second-hand gifts (for educational purposes), but are instead dismantled by ragpickers and recyclers. As India continues to welcome the world's waste, the move from junkyard to graveyard may not be too far.