India Puts Plans On Hold As Maldives Goes To Polls

At odds with the repressive Yameen, India waits as Maldives goes to the polls 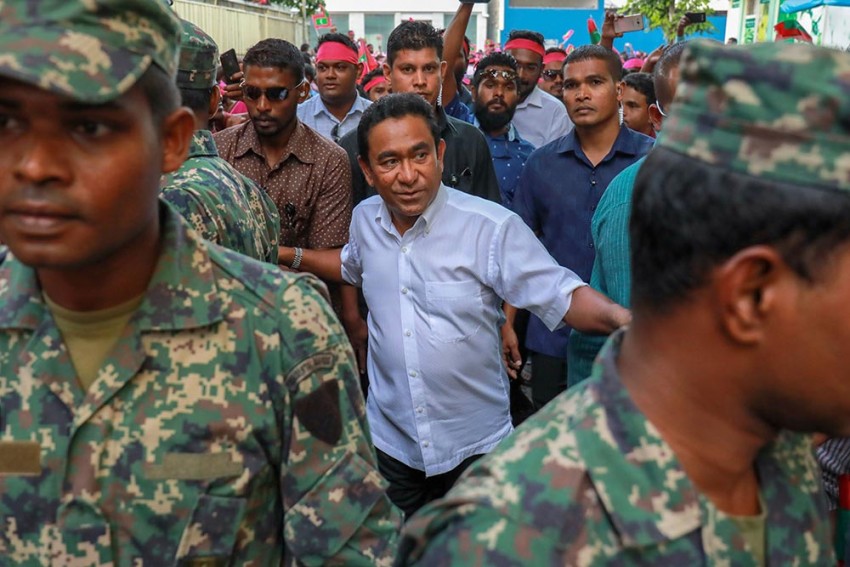 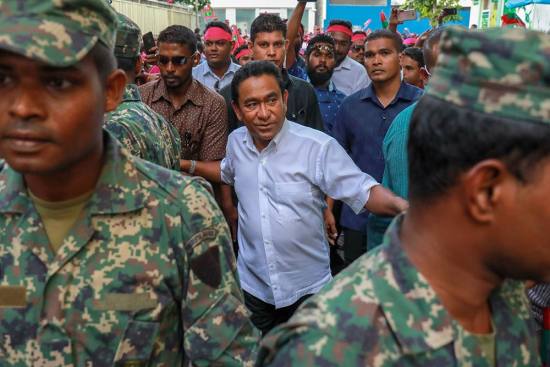 Reputation has its own downside, especially in diplomacy.  India’s successful naval intervention in Maldives in 1988 to thwart a coup against the then president Maumoon Abdul Gay­­oom, seems to have played a key role in shaping New Delhi’s image in this crucial Indian Ocean archipelago nation.

Though thirty years have passed, many in the region and beyond expect South Asia’s “Big Brother” to repeat its exploit to end Maldives’ cur­­rent crisis. The regime of Abdulla Yam­een has not only stifled, jailed and exiled dissenters—opposition politicians, parliamentarians and judges of the supreme court—since declaring Emergency in February 2018 (it was in place for 45 days); its policies have also raised concerns in India about its core interests being jeopardised. The dem­and for intervention, therefore, seems justified to Yameen’s detractors in both Male and New Delhi.

“We would like the Indian government to send an envoy, backed by its military, to free judges and the political detainees….” Mohamed Nasheed, a former Maldives president, had fervently app­ealed in a February statement.

More recently, BJP MP and former Union minister Subramanian Swamy sou­­ght India’s military intervention in a series of tweets to ensure fairness of the September 23 polls in Maldives and the safety of Indians there. Sections in South Block also feel India should act ‘tough’ to remind Male of its primacy in the region.

Male knows India is wary of China’s creeping influence. It’s playing up the rivalry to its advantage.

But India was quick to distance itself from Swamy’s tweets and remains circumspect in finding an effective way of dealing with challenges that Maldives poses. For, though the action it took three decades ago continue to loom large in the memories of people in the region, policy planners in New Delhi know that they now need a more nimble-footed, manoeuverable approach to deal with the emerging scenario in Male.

For nearly 40 years, India and the rest of the world seemed perfectly happy with Gayoom’s stable presidency, even though he dealt with opposition and dis­senters with an iron hand. In 2008, the first democratic election in Maldives brought Mohammed Nasheed to power. But, in the process, it also opened up various fissures of Maldivian society and sparked a spate of political instability in the archipelago that continues till today.

Despite his ‘neighbourhood first’ policy, PM Narendra Modi is yet to visit Male. In 2015, he had to call off a scheduled visit because of the political chaos there. But he made an effort of re-eng­aging with Maldives soon when he hosted Yameen in New Delhi in April 2016. The two sides signed six agreements, including one on defence cooperation.

However, from early this year, Yameen’s jackboot policy of jailing dissenters, including judges, parliamentarians as well as his half-brother and former president, Gayoom, evoked a strong response from India, which expressed “dismay” at developments in Maldives. Yameen reacted by asking “foreign powers” to stay away from meddling in the country’s internal political developments, thus setting the stage for a renewed phase of antagonism in Male-Delhi bilateral ties. To make things worse, in a gesture of defiance, Yameen returned the two military helicopters that India had given Maldives.

Maldives’s geo-strategic imp­­­ortance is such that India cannot stay away from engaging with it. The situation has been complicated further with China’s growing footprint in this important signpost in the Indian Ocean. In the past decade or so, maritime trade has bec­ome increas­in­gly import­ant for India and China. As the need for importing oil have grown immensely, the sea lanes in the Indian Ocean around Maldives have gained greater importance.

With Maldives also becoming part of China’s Belt Road Initiative, the com­­pet­itiveness of the two Asian rivals, especially in the infrastructure sector, has become sharper. For its part, the Male leadership has been smart to realise that much of India’s discomfort over developments in Maldives comes from China’s growing pre­­sence, and as a result have started pla­ying up their rivalry to its advantage.

But, as the September 23 election draws near, the fate of 30,000 Indians who work in Maldives have also come into focus, as many of their visas are yet to be renewed. Yameen’s government had earlier tightened rules for Indians working in Maldives’s tourism sector after the Emergency, since New Delhi’s expression of dismay.

As indications suggest an easy return to power for Yameen in the forthcoming polls, India has put its future plan for Male on hold, sticking for now to its non-interventionist stand. But one thing is for sure—they cannot be kept in abeyance for long.

Rail Fares Too Low, Should Be Raised Every Year: Ashwani Lohani