Malegaon blast accused Pragya Singh Thakur is contesting from Bhopal Lok Sabha seat on a BJP ticket against Congress veteran Digvijay Singh. Victims of the blast are upset at the 'freedom' firebrand Pragya is enjoying. 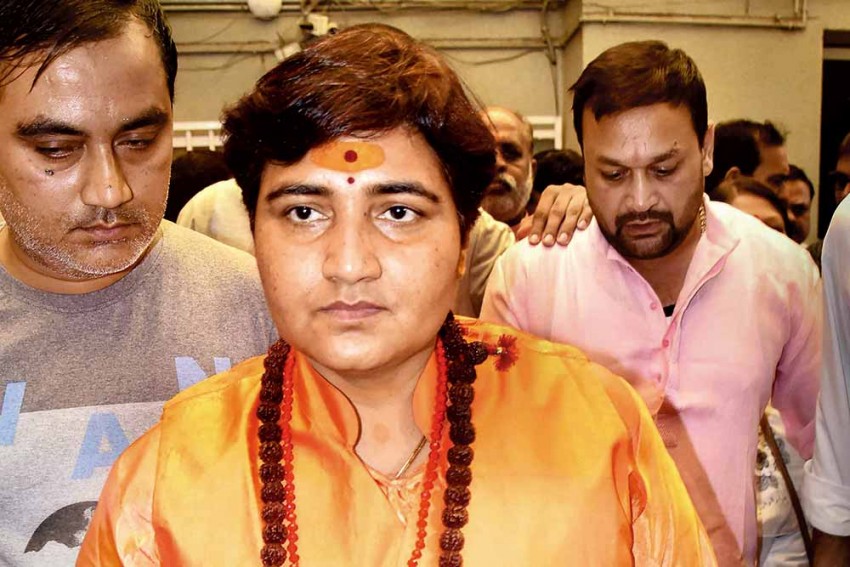 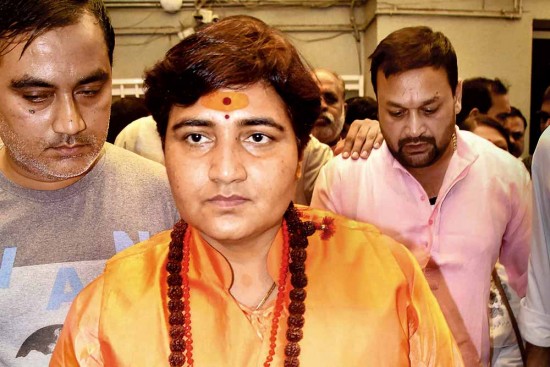 Mehjabeen and Nisar Sayyed voted in Malegaon on April 29, but their eyes are trained on what happens in Bhopal on May 12, where accused Sadhvi Pragya Singh Tha­kur, a BJP candidate, is contesting against the Congress’s Digvijay Singh. Nisar, retired father of Sayyed Azhar Nisar Ahmed, who died in the Malegaon blast in September 2008, tried unsuccessfully to prevent Sadhvi Pragya from contesting the election. He filed an intervention petition in the special court where the trial for the blasts is going on. However, the court observed there was no provision to stop an accused from contesting elections.

While Pragya’s candidature, her remarks about her ‘curse’ on late ATS chief Hemant Karkare and that of curing cancer with cow urine has shocked and been deplored, her stout defence by senior BJP leaders is something families of victims are finding hard to believe. “She is an accused and she is being given a ticket. She should be punished, but see what is happening. She is on bail, not acquitted. We are worried because of the way the case is progressing,” says Mehajabeen. IPS and IAS officers’ associations have also protested against Pragya’s “curse” remark and declared support for the late Karkare.

The Malegaon blasts case has seen many ups and downs. In 2006 and 2008, two blasts ripped through Malegaon. Initially, in the 2006 case, some Muslim  men were arrested, faced trial and then acquitted. In 2008, under the investigation of the then ATS chief Karkare, Pragya, Lt Col Prasad Shrikant Purohit, a serving army officer, and others were arrested for conspiring and executing blasts in Malegaon (in September 2006 and September 2008) and on the Samjhauta Express in February 2007.

The term ‘Hindu terror’ or ‘saffron terror’ was coined even as details of a conspiracy to overthrow the Indian government and to est­ablish a Hindu rashtra were mentioned in the 5,000-page chargesheet first filed by the ATS. The case suffered a terrible setback when Karkare was killed in the 26/11 Mumbai terror attack. The case was transferred to the National Investigating Agency (NIA) in 2011. In 2016, the NIA filed a supplementary chargesheet, which cleared Pragya. “During investigation, sufficient evidence has not been found against the below mentioned persons and the NIA has submitted in the final report that the prosecution against them is not maintainable—i) Pragya Singh Thakur, ii) Shiv Narayan Kalsangra, iii) Shyam Bhavarlal Sahu, iv) Praveen Takkalki, v) Lokesh Sharma vi) Dhan Singh Choudhury,” said their press statement.

The ATS had placed before the court evidence such as recorded conversations, literature found in computers and a bike registered under Pragya’s name. The case seems to have weakened with the NIA submitting that there is no case against Pragya Singh Thakur. In 2015, special public prosecutor Rohini Salian claimed that she was asked to go ‘soft’ on the case and was soon removed. Pragya was given bail on health grounds. It is another matter that last week the daily Mumbai Mirror reported she was medically fit and not suffering from cancer, as reported earlier. It quoted doctors who had examined her. 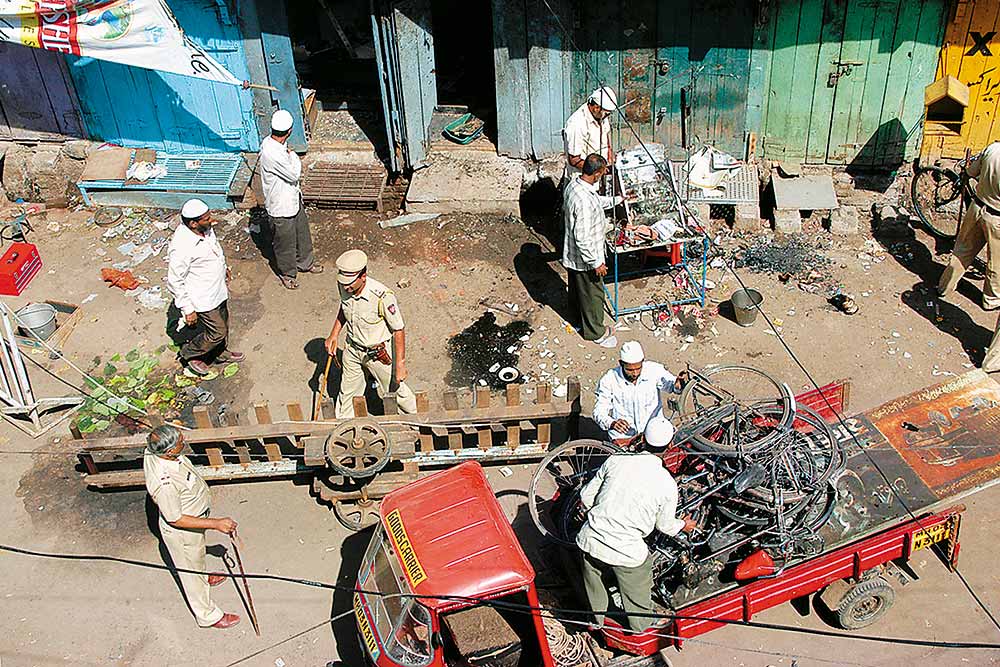 “The first breakthrough came when the bike was recovered. Though the number was erased, it was reconstructed with the help of the forensic team and three possible numbers were identified, of which one was identified with the bike, one was never manufactured and the third one led to Surat, registered under Pragya Singh Thakur’s name,” says former SPP Salian. “The team went to her house, she was in Bhopal and then she came in for questioning. She claimed that the bike was not in her possession. However, there was corroborative evidence of a witness testimony, details of servicing from the garage etc. She was arrested only after two witnesses implicated her and the vehicle details matched.” Salian met­iculously lists evidence such as video recordings of meetings where the attacks were planned, audio rec­ordings of phone conversations and a witness who served water at a meeting. “MCOCA was not uph­eld, otherwise the confession of acc­used Shankaracharya would have been admissible too. Purohit was arrested only later.” Salian shares that Karkare had done a lot of work on the case but refuses to comment on how the case has progressed since she left.

Advocate Irfana Hamdani, based in Malegaon, has also tried to pursue the case for over a decade. “Why are they relying on oral evidence of a hostile witness when there are so many recorded conversations? They cannot find them now. They are saying the vehicle was used by an absconding accused. Where are the papers if it was sold to him? In the 1993 serial blasts case, Rubina Memon was convicted and sentenced to life imprisonment because the car was registered in her name. Either they should release her or hold Pragya Thakur responsible for her vehicle being used in the blast. We have been trying but the case has weakened over the past few years,” she says.

All this investigative dithering hasn’t been easy for the people of Malegaon, a powerloom town with a predominantly Muslim population about 200 km from Mumbai. The blasts, which took place during the month of Ramzan, have been on their collective consciousness. “The hotel owner has not changed the clock which says 9.35. That is when the blast in front of the hotel stopped it. The case is a matter of justice for all,” says Hamdani.

Shafique Ahmed, who has helped blast victims (nine were killed, over 100 injured) and tried to follow up on the case, says they are worried bec­ause the “investigating agency is trying to prove that the accused are innocent and the present government is supporting them.”

He adds, “Prayers for Id were offered with black flags in Malegaon after the blasts. People protested everywhere. We went to Delhi and met leaders of all parties. We were very lucky that an officer like Hemant Karkare was investigating. When the burnt motorcycle was found and was traced to Pragya Singh Thakur, the case started unraveling.” He has pinned hopes on the judiciary, which has consistently asked for a proper probe based on solid evidence. In 2018, the Bombay High Court had asked for an expedited trial at the request of an acc­used, Sameer Kulkarni.

Nisar’s family is not willing to give up. “I am ret­ired and we don’t have money to follow the case and travel to Mumbai. My children are also working in small jobs. But there has to be justice for our son,” says Nisar, who isn’t comfortable speaking on the phone about the case. His more vocal wife wants to know how they should feel about Sadhvi Pragya getting special treatment from the BJP. Shafique is anxious about the elections. “Now it is up to the citizens of Bhopal and our country. They will decide what kind of nation we will be.”

In 2015, after she left the case, Salian had told Outlook: “In courts we only speak of offenders, irrespective of their religion, with proof. When I wear a black coat in the court, I am just a lawyer, a prosecuting agency. I too have my faith, but it doesn’t impinge on my work. I am not biased and I am there to help the court to deliver justice. The only issue is of proving the charge of the offender. He is a man who has gone astray and his actions have affected the public. We are tackling that. If it’s proved, he will be in, otherwise he walks away, simple.” Will it be so simple in this case, ask the families of Malegaon blast victims.