After keeping millions of his fans guessing for two decades, Tamil superstar Rajinikanth seems to be on a political backfoot 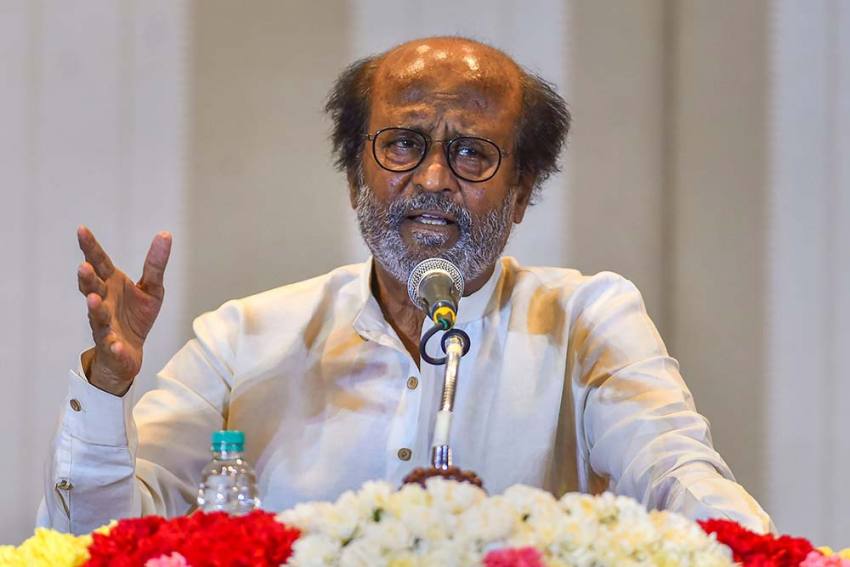 Quandary
Rajinikanth at the press conference on March 12 that so perplexed his fans
Photo by PTI
G.C. Shekhar March 18, 2020 00:00 IST When Rajinikanth Punctured The Hopes Of His Fans With A Damp Squib Of A Speech 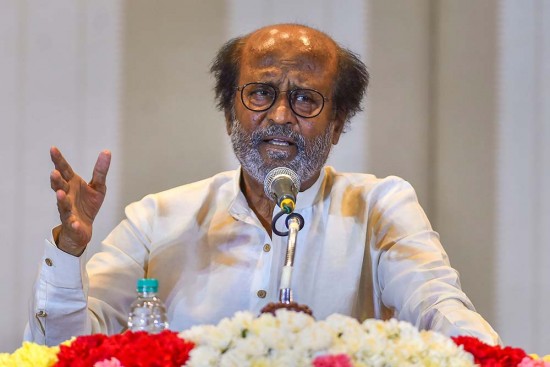 Party and government to have separate leaders. Rajini will not be CM as he never desired the post. Suitable candidate will be made CM, who will take advice from an expert committee.

A majority of assembly tickets for those below 50. No assurance it will be Rajini fans. Rest for retired officials and entrants from other parties.

Most party posts created for elections will stand abolished after elections.

“En vazhi thani vazhi” (My path is a separate path): thus a famous movie punch line of Rajinikanth when his political entry was eagerly awaited in the 1990s. After keeping millions of fans on tenterhooks for two decades, it now appears that those words could actually describe his exit route from politics, not his actual entry.

The Tamil superstar did appear to be strapping on the parachute for a quick getaway from the political scene even before rolling in its hurly burly during a thirty-minute monologue (dubbed as a ‘press meet’) on March 12. At the end of it he left friends, fans and foes alike in a stupor by asserting that he would provide political leadership but not run the state as its chief minister. By insisting that he never desired the CM’s post and would nominate someone competent to the top job, the iconic star virtually punctured the long-cherished expectations of his fans. They had tuned in to the live telecast hoping that he would at least set a launch date and venue for his new party which, they fondly hoped, would culminate in his coronation as chief minister after the 2021 elections.

Instead, he sent out two more shockers—his fans or the functionaries of the Rajini Makkal Mandram (an org­anisation formed from his fan clubs, put together prior to the launch of a political party) will not be automatic choices for MLA tickets. Sixty per cent of that would be reserved for youngsters below 50, the rest going to retired officials and entr­ants from other parties. Even party posts, when the party itself materialises, are supposed to be transitory—most of them would be abolished once elections were over, so they cannot be used to inf­luence government decisions. “This is the only way to bring about a political change not merely a change of government,” Rajini theorised.

Rajinikanth’s utopian political prescription bordering on the impractical so shell-shocked fans waiting outside a Chennai star hotel that when he drove back home hardly anyone waved at him. Contrast that with the raucous welcome he is accustomed to receive amidst bursts of firecrackers and frenzied shouts of ‘thalaivaa’. Truth is, most diehard fans feel ‘thalaivar’ (leader) has let them down badly. “Without trusting his own fans how can he build a party? When MGR started his party in 1972 most functionaries and later many MLAs came from his fan associations. Same with Vijayakanth in 2005. Also, why would fans work to make an outsider or a defector from another party an MLA when they had stayed invested in the ‘makkal maram’ all these years in the hope that our leader will reward our loyalty?” asks Aravindan, an autorickshaw driver who had just watched Rajini’s speech on his mobile phone.

What took the wind out of their sails was Rajini’s formula that he would only lead the party and make someone else CM. This amounts to playing the outlier, like he did in 1996 while speaking against Jayalalitha or in 2004 against the PMK. On both occasions, he stopped short of taking the plunge. His fans were thrilled when in December 2017 he announced his intent to enter politics and contest all 234 Assembly seats. Voters craving for an alternative to the two DMKs thought he had finally arrived at a decision after years of dithering. Two years later, he has gingerly stepped back again.

Instead of leading from the front, Rajini wants fans to create awareness of his new politics.

Instead of taking the lead, Rajini­kanth bizarrely wants his fans to create a wave of awareness amidst people about his political blueprint; once that happens he would join the journey. “Should he not be in the forefront creating this uprising? Lead the party from the front, rather than expecting the people to carry him on their shoulders? Should he not be piloting his party against all odds like MGR or NTR? He simply wants to run away from direct accountability, like in the past,” observes Ramu Manivannan, who teaches politics at the University of Madras.

Rather than challenge the two Dravidian parties Rajini also appears daunted by their dominance of the state’s political landscape. He even adm­its that his film popularity alone would not suffice to take on their heg­emony in an electoral battle. “It only proves that Rajini might be popular but lacks the charisma or in-born toughness to engage in a political contest,” adds Manivannan. And this hesitation amounts to an indirect admission that the political vacuum he had promised to fill no longer exi­sts, as CM Edappadi Palaniswami and DMK’s M.K. Stalin have grown with their jobs to occupy the competing political space.

Not surprisingly, the only happy faces could be found in the ruling AIADMK and DMK as their leaders quietly savoured the actor’s dilemma. The AIADMK was bracing itself for a spate of desertions when Rajini launches his party, as it would have to battle ten years of anti-incumbency and the absence of the charismatic Jayalalitha. The DMK, too, apprehended that Rajinikanth could emerge a serious challenger to M.K. Stalin and has drafted the services of electoral strategist Prashant Kishore to plan its strategy. After Rajinjikanth’s limp ind­ecision, the two parties can prepare for the straight fight of old.

Rajini also flummoxed the calculations of other players. The BJP, which was hoping to jump on to the Rajini bandwagon, especially after his support for CAA, is now clueless. “He is still a cat on the wall, unsure if he actually wants to enter politics,” observes BJP state general secretary Vanathi Srinivasan. The PMK, which was counting on being Rajini’s prime ally and hoping to contest at least 50 seats with him, now has to negotiate with the AIADMK without the bargaining chip called Rajinikanth. Even the Congress, also looking to strike a bargain with the actor, will have to remain content with whatever the DMK hands it. Similarly, actor-politician Kamal Haasan, who announced his readiness to join hands with Rajini for the welfare of the state, might be staring at a lonely and uphill electoral foray.

But many feel Rajinikanth might not have spoken the last word and could actually be positioning himself for a take-off in the near future. “Rajinikanth wants his political app­roach to be a game changer. So he has taken a calculated risk by publicising it right away instead of keeping it under wraps till the last minute. One must at least appreciate his political honesty,” argues Rangaraj Pandey, founder editor of Chanakyaa digital channel.

“All Rajini needs is about eight months before the elections to make his presence felt. He might be testing the waters with his proposals and can still be persuaded to be the chief ministerial candidate. Unless he makes this a Rajini-centric election he cannot create the necessary impact. Let us not forget that this will be his first and last election, as he himself admitted that his health is not so great and that he will be 71 next year,” observes political commentator Ravindran Duraiswamy.

Unless Rajinikanth follows up this speech with a clear political game plan he would exemplify another Tamil saying—“pogaadha oorukku vazhi”—seeking directions with no intent to travel.

Exclusive: Law On CAA Discriminatory, Unconstitutional, How Can Centre Force It On States? Asks Amarinder Singh