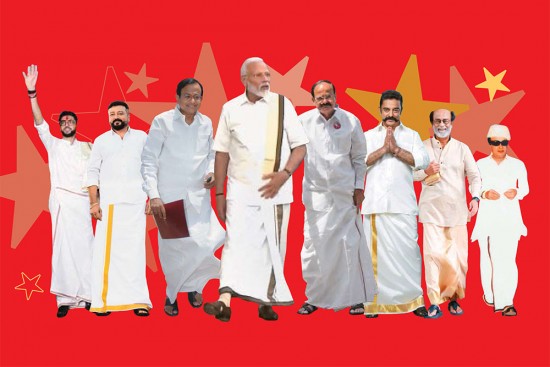 Unsung because of its unaffecting plainness—worn staidly in its crisp formality or as a raiment for the hurly-burly, fit to be folded up in a flash to aid mobility, the veshti, it will be agreed, is primarily a workaday affair. When Narendra Modi, clad in a veshti and white shirt, showed Chinese President Xi Jinping around Mamallapuram, he also showcased the white wraparound cotton apparel that had been a staple dress for South Indian men.

Modi has given the veshti an international exposure, though the garment has forever been in national spotlight. The one politician who had never abandoned the white ves­hti—and the cloth, in turn, lending him an air of composure and grace—has been former finance minister P. Chi­dambaram. Though a stranger to the veshti, Modi, through that single visual statement, had also sought to counter the notion that the BJP and his government were anti-Tamil.

Taking a leaf out of Modi’s stylebook, Shiv Sena’s Aditya Tha­ckeray, too, wooed Tamil voters of Mumbai’s Worli constituency by showing up in a veshti during his assembly poll campaign. It was one of those delicious ironies that politics serves up over time—a stark departure from his grandfather who, in the 1970s, poured bile on (the veshti-clad) ‘Madrasis’ of Mumbai.

In Tamil Nadu, the veshti/dhoti has remained a stock outfit for its regional leaders, though in 2016 DMK’s Stalin tried for a brief while a new look with...