UP Election 2022: Can The Elephant Resurrect Itself?

Though the Samajwadi Party is projected as a strong contender in the run-up to the UP assembly polls, Mayawati' Bahujan Samaj Party could yet be the surprise package.

Barely any resident remembers when Mayawati last visited her birthplace—Badalpur village in Uttar Pradesh’s Gau­­tam Buddh Nagar district. Some reluctantly reply that it was around 10-12 years ago. Prabhu Kut­ir, the small house where the Bahujan Samaj Party (BSP) supremo was born in 1956 and spe­nt her early childhood, was handed over to a relative, Vikram Singh, 41, in 2006.

Answering a query as to why she was not making frequent public appearances unlike prominent leaders of other parties, Singh tells Outlook, “Behenji doesn’t believe in drama-­baazi. The party believes in people-to-people contact instead of election extravaganzas.” After a pause, he continues, while refuting media predictions about BSP’s poll prospects in the forthcoming UP assembly elections, “The ‘managed’ media always shows our party in bad light.”

His defence seems to be at odds with Maya­wati’s widely-perceived political paralysis. Even on sensitive issues of atrocities against Dalits, such as the Hathras rape incident, she has been severely criticised for her silence. Supreme Court lawyer Seema Kushwaha, who represents the Hathras gang rape and murder victim, though, joined the BSP recently.

Mayawati’s alleged inactivity seems to have no impact on her party’s supporters in Badalpur—which was once called VVIP village due to its imposing infrastructure. An alternative underground electricity supply line to the village has been lying defunct since Mayawati lost power in March 2012. Today, the village near Ghaziabad on NH 34 portrays an ugly picture of governm­ent apathy. All the employment generation programmes started during Mayawati’s tenure have been abandoned halfway.

Almost every day, party activists like Vikram Singh and district vice president Satpal Gau­tam conduct a door-to-door campaign to consolidate BSP’s vote share in the constituency. “For seeking votes, we just discuss the state’s law and order situation, employment scenario and development in the education and health sect­ors when BSP was in power on four occasions in UP,” he says, arguing that all the big infrast­r­ucture projects in UP, such as Noida Internati­onal Airport, eight-lane Ganga Expressway, eight-lane Yamuna/Taj Expressway, Buddh International Circuit and Gautam Buddha Uni­versity at Dankaur, were envisioned and started under Mayawati’s rule. They boasted that it was during her tenure as chief minister­—between 2007-08 and 2010-11—that the state’s average annual GDP growth rate shot up to 17 per cent.

UP has a 21 per cent Dalit population and the BSP has successfully maintained about 20 per cent vote share in the past three decades. In the last assembly elections in 2017, BSP won 19 sea­ts. It secured the number 2 position along with the Samajwadi Party (SP) in terms of vote share, which was 22 per cent. But in the Lok Sabha polls of 2019, which it fought in alliance with SP, it emerged as the second-largest party in UP after winning 10 seats, whereas SP had to satisfy itself with only five. 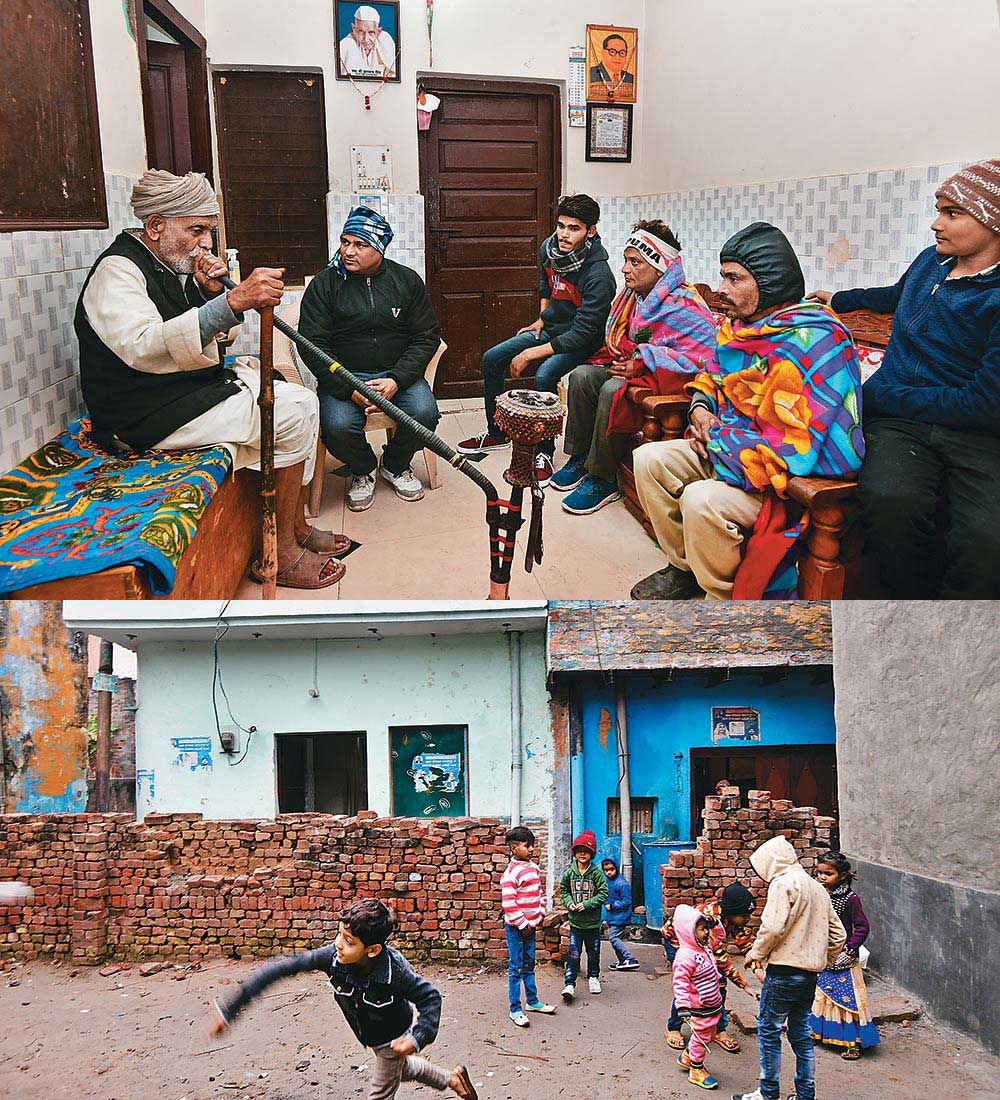 “In this election, BSP is the only party that is contesting in all 403 state assembly seats on its own,” says Prof. Vivek Kumar, cha­ir­person at the Centre for Stu­dy of Social Systems, School of Soc­ial Sciences, JNU, New Delhi. “In the 2017 elections, when eve­r­y­thing was going against BSP, the party managed to get 22.5 per cent vote share.”

“This time, the media is telling us that Mayawati and her party are finished! Why is there this animo­sity that they are inflating SP and decimating BSP?” he asks.

He says when SP came to power in 2012, the election was contes­ted under the leadership of Mul­a­yam Singh Yadav and other lea­ders like Shivpal Yadav, prominent Kurmi leader Beni Prasad Verma, besides stalwarts like Azam Khan, who still holds sway despite being in jail; important Thakur leader Amar Singh, and celebrities like Jaya Prada and Jaya Bachchan. “In 2017, Akhilesh entered into an alliance with Congress. He didn’t fight 403 seats on his own. In 2019, he fought in allia­nce with BSP. In 2022, he is again entering into an alliance with smaller political parties,” he says.

Contradicting his views, however, Bibekanand Nayak, an assistant professor and assistant dir­ector at the Centre for Study of Social Exclusion and Inclusive Policy, Babasaheb Bhimrao Amb­e­dkar University, Lucknow, says BSP’s inability to retain leaders and forge alliances with sma­l­ler parties was proving detrimental to its existence.

Calling out the absence of a student wing in the party and its abstinence from local body elections, Nayak wonders, “Where will the young leadership and cadre come from?” He also touches upon the reasons behind the party’s passivity, saying, “The party cadre don’t hold protest rallies, as the social discrimination escalates against them within no time. So they don’t exert their political identity.”

On December 30, Union home minister Amit Shah mocked Mayawati for not holding political rallies, saying, “Elections are round the corner but Behenji seems already afraid.” In a stinging reply, she said the ruling party was wasting public money.

Unlike the rest of the political parties like BJP, Congress and SP, says Harish S. Wankhede, an assistant professor at Centre for Political Studies, School of Social Sciences, JNU, “BSP never carried out that kind of typical activism like protest movements or agitations and rallies. It never even released poll manifestos. The party’s electoral campaigns have always been personalised. And it has paid BSP off for long.”

But this time, he adds, “The con­ventional mode of politics doesn’t seem to be helping it. The party is lacking visionary leadership, capital, party infrastructure and intellectual support.”

“BJP is a powerful party, whereas SP is a strong Opposition party. So BSP’s prospects look bleak,” Wank­hede says, adding, “Mayawati also looks tired. There is none who see­ms to be sailing the party through troubled waters.”

Prof. Kumar believes mainstream media is not showing the real picture. He adds that according to BSP’s national general secretary Satish Chandra Mishra, at least 75 Brahmin sammel­ans and 86 reserved constituency meetings have been held across the state ahead of the polls. “On October 9, Behenji held a grand rally at Lucknow. In September, she addressed a massive Brahmin Sammelan in Lucknow. As per my estimates, more than 500 meetings have been held by senior party leaders so far,” he exp­lains. “But nobody is talking about it.”

Recently, the party entered cyberspace in a big way. “We can also make anything trend on Twi­t­ter now,” claims Vikram Singh in Badalpur. With the emergence of alternative media, there has been a remarkable growth in Dalit news plat­forms in the digital space. “This has liberated us from the grip of mainstream media,” he adds, confidently.

Commenting on Mayawati’s role as an Oppo­si­tion leader, Bibekanand Nayak says: “She failed to play that role after losing the assembly electi­ons. We have never seen her in public the way SP chief Akhilesh Yadav and for that matter, Congress leader Priyanka Gandhi, make their presence felt as Opposition leaders.”

Drawing a contrast between the functioning of Mayawati and her mentor Kanshi Ram, he says, “Kanshi Ram was a father figure who mentored a lot of leaders. But Mayawati has expelled most of them. Older OBC leaders like Swami Prasad Maurya have mig­rated to other parties. The new leaders are yet to rise.”

Even though BSP has fielded many Muslim candidates in wes­tern UP, observers like Nay­ak and Wankhede believe Muslims are more inclined towards SP as Akhilesh has fiercely opposed BJP’s discriminatory policies, unlike Mayawati. 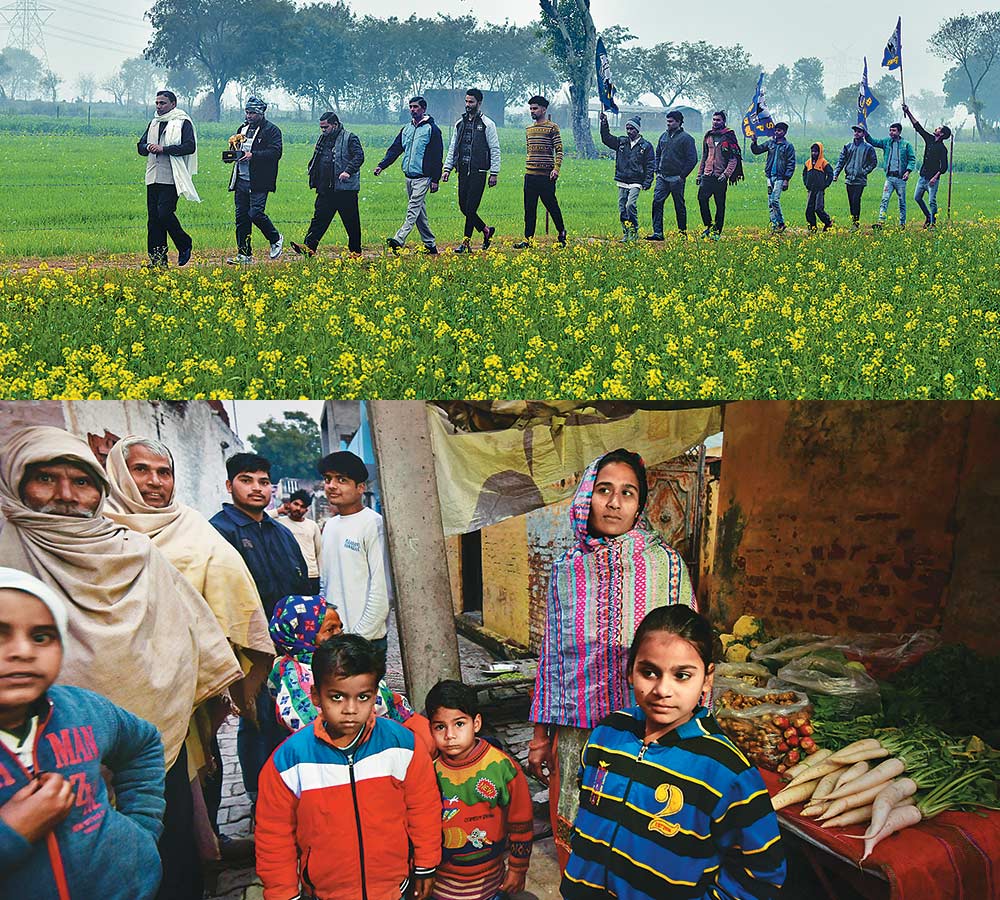 Beyond media spotlight A BSP campaign underway in UP’s Dadri in 2022 (top); UP voters listen to a campaign.

BSP doesn’t have a prominent Muslim face since Naseemuddin Siddiqui’s expulsion from the par­ty in 2017, as a result of which the party is unlikely to get Mus­lim votes, they add. Further, they say, there is a perception she may join hands with BJP after the elections. Maintaining that several part­ies including All India Trina­m­ool Congress, Janata Dal (United), Peoples’ Democratic Party and Shiromani Akali Dal, have hobnobbed with the BJP, Prof. Kumar says, “Only BSP is looked down upon for their past alliance with BJP. Why? Is there a caste angle?”

“Mainstream media is lampooning a party that has remarkably strengthened Indian dem­o­cracy. It is just absurd,” he says, as he questi­ons the secular credentials of SP for acco­m­modating defectors from BJP.

Even if the party reinvents itself, Harish Wan­k­hede says, he is unsure if it will regain lost gro­u­nd. “Political conditions have changed. The Dal­it votebank has fragmented. Every political party has set up Dalit cells.” With Bhim Army’s Chandrashekhar Azad taking the plunge into electoral politics, he claims, “There is a lot of confusion among lower Dalit voters.”

However, taking strong exception, Prof. Vivek Kumar calls Chandrashekhar a “no entity” on the ground. “Had Chandrashekhar been so pow­erful, he would have been successful in forging an alliance with Congress or SP by now. The media has been projecting him with an obj­ective to demean Mayawati. He is an agitator just like Anna Hazare.”

While Bibekanand Nayak admits that Chandra­shekhar is not a mass leader, he says, “Bhim Army’s emergence is an indication of BSP’s decl­ine. Several young party workers have shifted to Ambedkar groups set up by other parties in recent years. Aspiring leaders want an opp­ortunity to grow, and BSP needs to und­erstand this.”

Observers like Amol Vajji, a Nagpur-­based academic who works with the Moolniwasi Sangh—an offshoot of BAMCEF (Backward and Minority Com­m­unities Employees Federa­ti­on)—feel BSP has deviated from its core Ambedkarite ideology. “Now, the party has been giving leadership to upper caste people,” he deplores. Inv­oking Kanshi Ram’s iconic speech del­i­vered on April 14, 1984, Vajji ass­erts, “BSP must go back to his form­ula of mobilising 85 per cent of the population, which includes SC, ST, OBC and minorities.”

For Mayawati, Vajji suggests, the primary objective should be dissemination of Ambedkarite ideology. “We want BSP to come to power, as other Ambedkarite organisations have limitations. Only BSP has the bandwidth to come to power and protect the interests of SC, STs, OBCs and the minorities,” he adds.

His sentiment resonated in Baral, a small vill­age in UP’s Bulandshahr as well. Unlike Maya­wati’s native village Badalpur, voters here are largely divided between BJP, SP and BSP. Alt­h­ough Dalits laud Narendra Modi and Yogi Adityanath here, they say they won’t vote for the BJP. Deepak Kumar, 19, an aspiring army soldier, tells Outlook, “Wha­t­ever little improvement we have seen in our social status in the past few decades, is because of BSP. We will vote for it.”

(This appeared in the print edition as "Can the Elephant Resurrect Itself?")