Called the 'Darbar Move', the practice of shifting the secretariat from Jammu to Srinagar and back every year was started by Maharaja Ranbir Singh in 1872 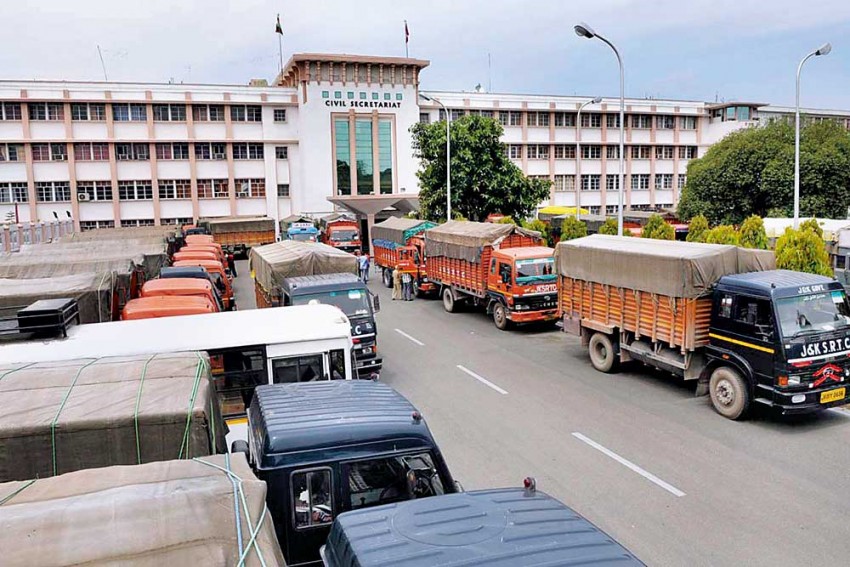 Trucking It
Lorries outside the civil secretariat in Jammu
Naseer Ganai September 18, 2019 00:00 IST 'Waste Of Money' But Dogra Tradition of Moving Capital Twice A Year Set To Stay In J&K 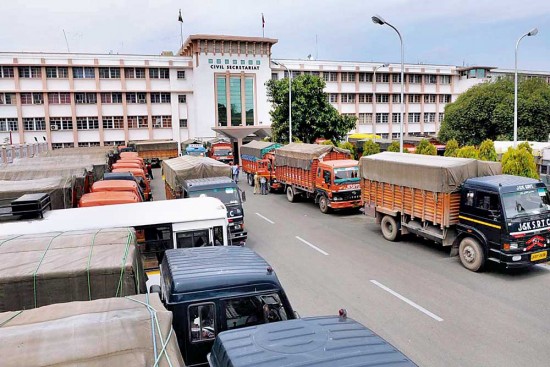 The BJP, which takes pride in having got rid of the special status granted to Jammu & Kashmir through Article 370 of the Constitution, is all for preserving two vestiges of the pre-1947 Dogra monarchy: two capitals and the ‘darbar move’ from winter capital Jammu to summer capital Srinagar in April-May, and from Srinagar to Jammu in October-November. The practice of shifting the seat of government twice a year was started by Dogra king Maharaja Ranbir Singh in 1872, alongside the int­roduction of the Ranbir Penal Code, which continued to be used instead of the Indian Penal Code in J&K so long as Article 370 was in force. “This won’t be changed,” says the BJP’s J&K general secretary Ashok Koul, though the party’s state spokesman Arun Gupta says it is the government’s prerogative to take a call. “But our position is that the arrangement of having two capital cities and the durbar move must continue,” says Gupta.

The authorities who were quick to rem­ove the state flag from the civil secretariat in Srinagar, are keen to make Hindi an official language and willing to led outsiders buy land assert that the government has not decided anything about the darbar move, which is seen as a waste of public money and resources. Senior officials in the law department insist the practice of moving the civil secretariat from Srinagar to Jammu and back, which costs over Rs 100 crore acc­ording to government estimates, is likely to stay. The J&K Reorganisation Act, 2019, which bifurcated the erstwhile state into two Union territories, is silent about the capital cities and the darbar move. J&K government spokesperson Rohit Kansal refused to talk on the issue.

The practice of shifting the secretariat from Jammu to Srinagar and back every year was started by Maharaja Ranbir Singh in 1872.

The Jammu and Kashmir High Court too moves from Jammu to Srinagar in summer and from Srinagar to Jammu in winter. In 1987, when the then J&K CM Farooq Abdullah issued orders to keep the civil secretariat in Srinagar open throughout the year, it led to an agitation in Jammu, spearheaded by the Jammu Bar Association. Several political parties also joined the agitation, forcing the CM to rescind the decision within a month. Later, Farooq’s son Omar Abdullah, on becoming CM, described the darbar move as a waste of money as nearly 100 offices and thousands of employees have to shift from one capital city to the other. But Omar couldn’t do anything about it as he feared stopping the darbar move would lead to protests in Jammu.

A week ahead of the darbar move for winter, trucks line up outside the secretariat in Srinagar to transport thousands of official files, documents, equipment such a computers and even some office furniture to Jammu. The government also puts in place tight security arrangements to ensure safe transport. The ­employees usually leave separately and are given a travel allowance of Rs 15,000. They are also provided accommodation either in government quarters or in private houses and hotels. In Srinagar, the government hires hotels near the Dal for employees who come from Jammu, and arranges for special buses to ferry them to the secretariat and back.

Prof Hari Om, former advisor to the BJP MP from Jammu, Jugal Kishore, says the government shouldn’t move the secretariat from one capital city to the other. “Let the two secretariats function simultaneously, one in Srinagar and one in Jammu,” says the professor, who is no longer with the BJP. “The people of Jammu need the government in summer too, and the people of Kashmir need it also in winter. The present arrangement is bereft of logic. Only the governor’s ­office and his advisors should move. This would save a lot of money.”

A state government official says that discontinuing the darbar move is not in the BJP’s interest even though the governor’s administration keeps talking about the wastage of funds. “Let them show the courage to end this darbar move. I know they won’t,” says the official, who didn’t wish to be named. “In the internet age, shifting of the government from one place to ano­ther, with files, documents, records and desktops, looks bizarre. You can digitally transfer the documents instead.” However, Kashmir has seen perhaps the highest number of government-­ordered internet shutdowns in the world and, since the evening of August 4, the Centre has put the Valley under a communication blockade.