Topkeydara In Darjeeling: A Lifeline For Endangered Red Pandas

In Topkeybara, Red Pandas, only about 2,500 adults left in the wild, are finding a safe habitat to remain alive and furring 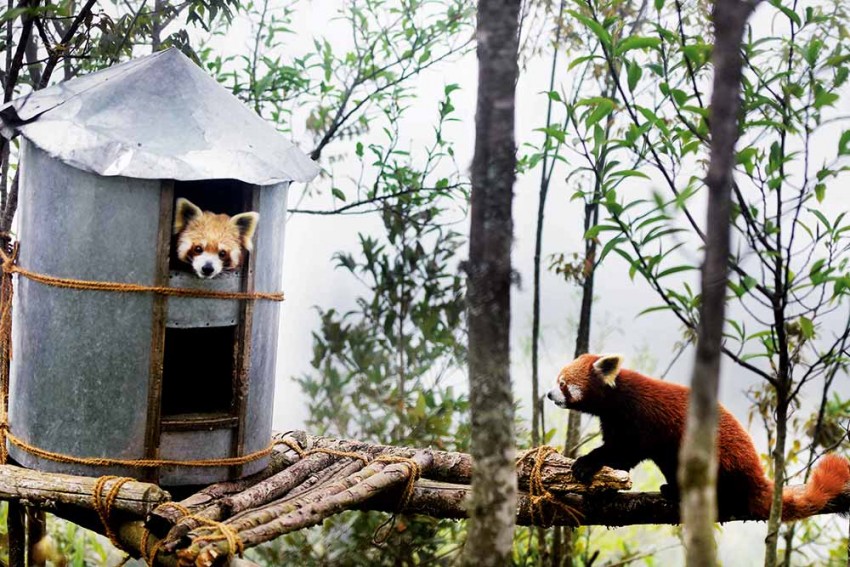 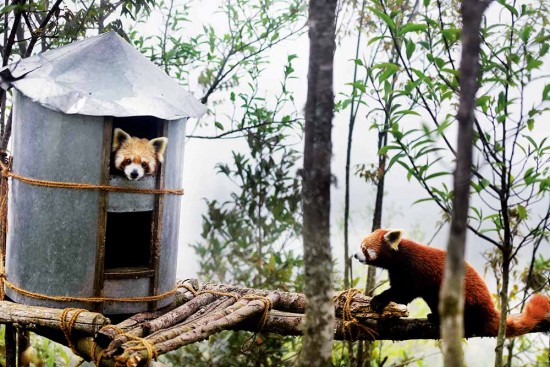 The cool downdraft from the Kanchenjunga blended with the warm sun on a crispy summer morning at the outdoorsy Topkeydara where the insolent Shifu unwinds on a tree-top perch after his bamboo breakfast. The five-year-old male red panda avoids the foot-long lenses of ‘Instagram upvote hunters’ pointing towards him from 25-foot below. He cannot be click-captured today. The seek-out for Master Shifu, whose animated adaptation end­eared movie-goers around the world in the Kung Fu Panda franchise, is threatening to end before it fully unfurled. He is doing the mushi-finger skadoosh on his biped fans.

Topkeydara in Senchal wildlife sanctuary is a 90-minute drive from Darjeeling town with a 5km dirt track detour off the 3 Milestone along the Ghoom-Jorebungalow Teesta Bazaar road. It is here that the Padmaja Naidu Himalayan Zoological Park (PNHZP) has set up the country’s lone conservation breeding centre for red pandas and snow leopards—two shy animals found in the eastern Himalayas, where swirling mists play hide-and-seek with the sun and the wind-swept conifers, oak groves and bamboo forests provide an ideal habitat to these fur balls.

The hillside at the sprawling five-acre enclosure is crimson, flush with rhododendrons—lali-gurash—and it is here that the handsome red pandas with their ruddy furry coats and bandit-mask bright eyes seamlessly melt into the burst of red flowers, moss and lichen. Of the 21 in ‘captivity’ in this region, seven red pandas are in Topkeydara and the rest in Darjeeling zoo. Other than Shifu, the conservation centre has five-year-old Kichi—from Mowgli’s red panda friend in The Jungle Book—and her three cubs…Noel, Joel and the yet-to-be-named sibling. The mom feasts on tender bamboo leaves as her young hover around and make soft squealing noises—called a huff-quack. They are perched high on oak trees, eyeing the humans below with guarded suspicion. 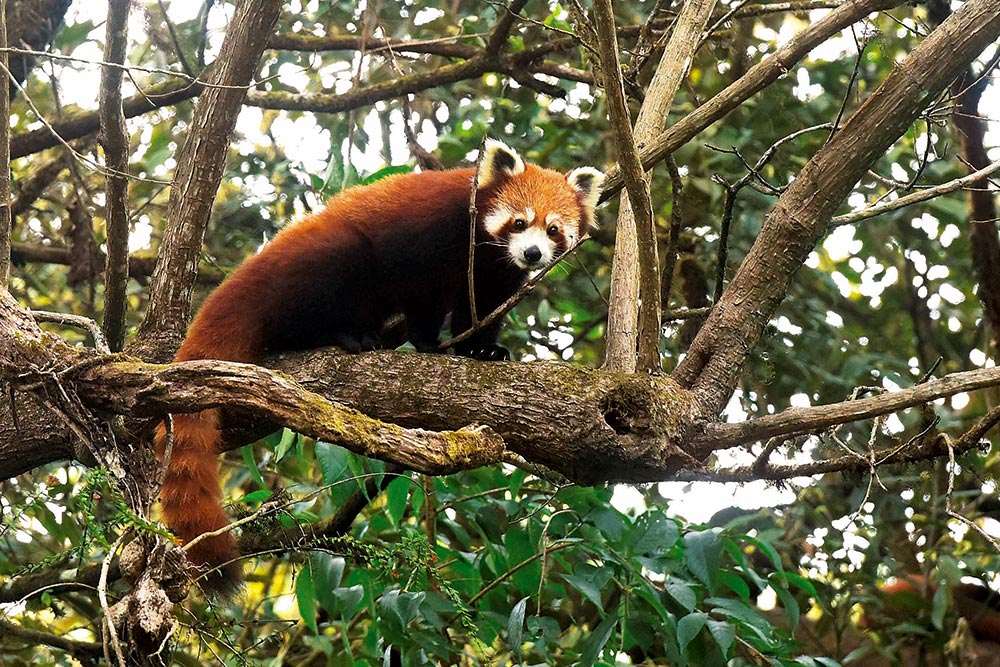 “Red panda’s favourite food is bamboo (perhaps the sole weakness it shares with the giant panda). Though the red panda is omn­ivorous and will eat an occasional fruit or leaf or even an insect or egg, bamboo makes up around 95 per cent of its diet,” says Pranita Gupta, a young education assistant at the PNHZP, who has been studying this adorable animal for more than five years at the park. But bamboo is a perplexing evolutionary choice for the red pandas. “A panda’s digestive system doesn’t have the required microbes to help properly absorb plant nutrients and to compound matters, bamboo contains little nutritional value…Red pandas digest less than a quarter of the food and so they are fed twice a day—morning and evening. To supplement their diet, they are given milk mixed with raw eggs and honey, besides fruits such as apples and bananas in the morning.”

The low-nutrient diet forces them to sleep a lot and conserve energy. Hence, they are solitary creatures. But these furry mammals’ preference for an arboreal lifestyle has put them in a vulnerable position. “The biggest danger in the wild is man…expanding human population, def­orestation, habitat loss, and disease, contracted primarily from domestic dogs. All these and hunting and poaching,” says PNHZP dir­ector Rajendra Jhakar. It is not a surprise that there aren’t more than 2,500 adults (estimated) left in the wild. Besides, it is hard to maintain a census because of their secretive nature.

In the early 1990s, in response to international conservation efforts, the park joined the ‘global captive breeding master plan’—a population management programme for the recovery and long-term survival of captive and wild red pandas. “Four young pandas were brought to kickstart the venture,” says Jhakar. The project was expanded in 2016 with new facilities at Topkeydara.

At present, the park has one of the oldest living captive pandas in the world. Pokhraj: 17 years and nine months. Over the past decade, the programme has recorded 41 births—21 females and 20 males—including five at Topkeydara. 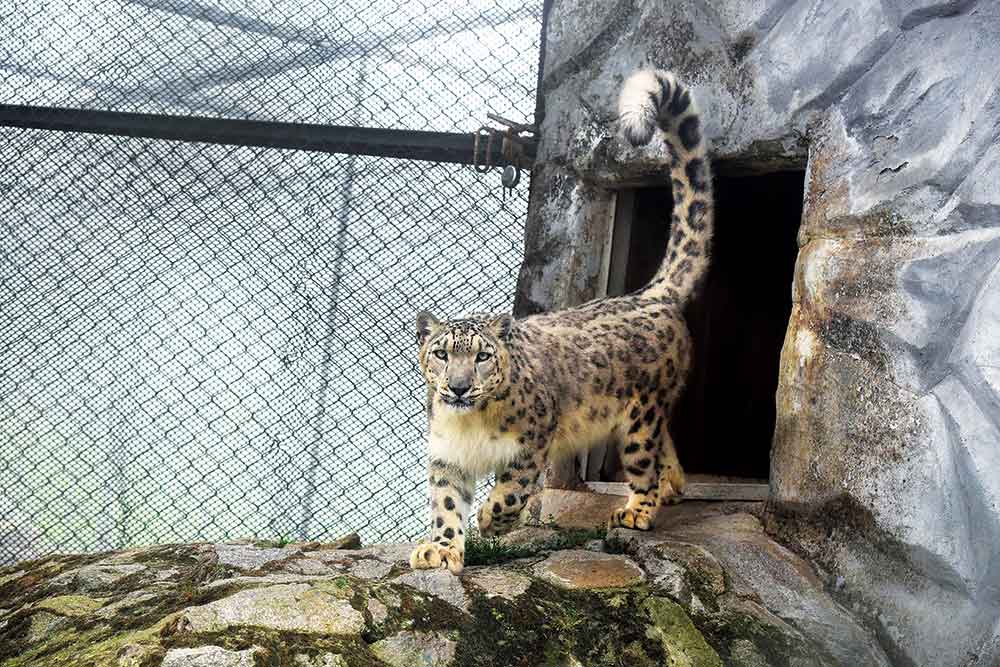 A snow leopard at the Darjeeling centre.

Biology student Gupta, along with colleagues Nandini Chettri and Purna Ghisingh, the gamekeeper at the PNHZP, recognises that her work is important for the protection and survival of the species in the wild. The aim of the conservation/breeding project is to maintain and restore lost population and have a higher genetic diversity so that the captive-bred red pandas have a chance to survive in the wild, says Gupta. Of the seven in the park, the aut­horities plan to release four in the wild by this autumn. The authorities had introduced two fem­ales in the wild in 2003. Of them, Sweetie gave birth to a cub in July 2004 in the hollow of an oak tree.

The animals are tagged and fitted with radio collars and micro-chips detailing the name and sex of the animal. “With fragmented forests, patches of agricultural land in between, there’s no way for the pandas to migrate to greener bamboo pastures or find new partners. That leads to inbreeding and disease and decline of the species,” says Jhakar.  “So it is ess­ential that genetic diversity is maintained.”

The red panda, or Ailurus fulgens—the fire-coloured cat or the firefox—looks for company when it’s time to mate. The reclusive and temperamental animals need a break from each other, even when kept in confinement. The park officials provide separate sleeping areas to let the pandas enjoy some “me-time” alone. “The cuddly animals are loners, and for the most part, silent. Once the male panda mates, he loses interest in the female and moves away,” says Gupta. She’s also found individuals that are un-panda-like gregarious. “Kichi is instinctively possessive of her young ones. If threatened, she will constantly move the cubs from one tree hollow to another.”

In Topkeydara, the elusive furballs are finding a habitat—be it human-intervened—to get on with what Oogway would have said: “One often meets his destiny on the road he takes to avoid it.” They are safe in a place that offers spectacular views of the Singalila ridge—range to range, all the way to Mount Kanchenjunga, the guardian deity.

By Probir Pramanik in Darjeeling

To Do What Thatcher Did To Our System’s Source