Decades ago, they shook India. They made headlines for days. But time and tide wait for none. Outlook remembers a dozen unique newsmakers... 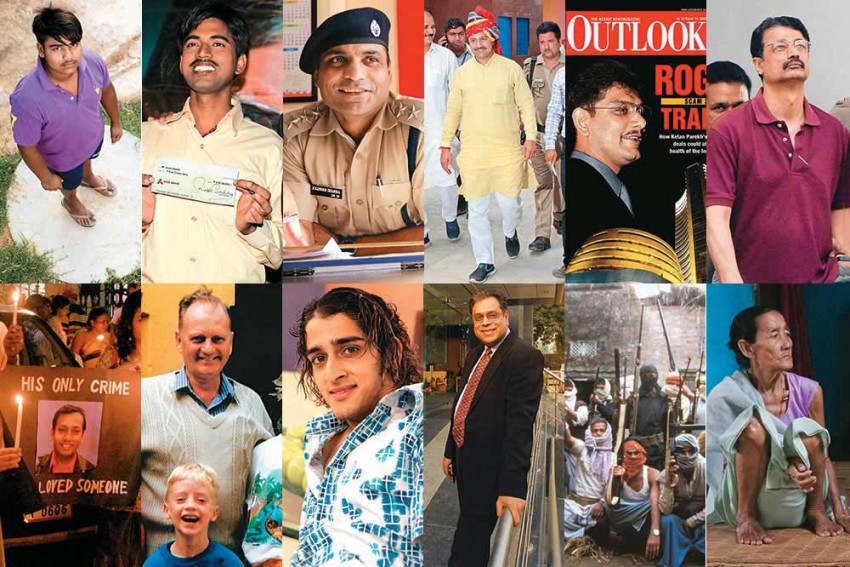 Remember Joginder Sharma’s famous last ball in 2007? Or the Kashmiri boy, Qazi Touqeer, who won Fame Gurukul in 2005? How about the young computer graphics trainer, Rizwan, who ended up dead on railway tracks near Dum Dum? Or the Shivani murder eight years before that? Maybe hazily…for we live in amnesiac times, pockmarked with phases of sensory intensity, as the news tickers strafe our minds.  The wish to document every second runs through us like a compulsive obsessive disorder…yet, strangely, our experience of living has perhaps never been as fragmented and elusive as it is now. We don’t see the swirls and indents in our morning cup of tea…unless digitised in our phonecams. Out on the streets, we see people as atoms in motion, non-phrasally, as it were. Bursts of coherent feeling come only on Twitter, with that same explosive T20 brevity.

When did we become what we are now? We have a dramatic, if rough, marker: the turn of the millennium. The more we look at it, the more we see a cusp phase where the old and the new collided. Take two episodes of violence from two decades ago. The villages of Jehanabad then stirred national horror with caste massacres: feudal violence, from an older world. Around then, a Hindu zealot in Odisha’s Kandhamal burned a Christian ­missionary along with his two sons. A new genre of violence was inaugurated that’s still with us. Difference? In 1999, it evoked collective shame; today it’s a numbing normal.

That was the nature of churning a nuclear power was undergoing. Then, the media too detonated. TV news boomed, the call centre universe bloomed, reality itself became a show. Everything became miniaturised. ODIs begat T20. Riots devolved into solitary lynchings. Instead of singular experiences, we have an assembly line of blurred ­memories. What do we rescue from that abyss? Prince, the five-year-old who sat in the pits of a 60-foot-deep borewell till he was saved? While TV news reached its lurid depths? We revisit that moment, and Prince too.

In our angry, fleeting, perversely post-truth world—one with a surfeit of information, but no ethos—the big is diminished, and the small rescaled to bring to us the proverbial 15 ­minutes of fame. For simplicity, we anoint the last two decades as ‘recent history’, and hunt down people and episodes…a random selection of not the biggest events, but ones with a ­certain symbolic mystique. Little hooks through which we can read ourselves. We also reach out to some of those who were at the centre of these last bits of experiential permanence; to discover what the kiss of media did to them, what the increasingly slippery nature of our age did to them, and try to fathom what they have done to us.

Those In The Centre Of The National Debate Must Speak Out: Amish Tripathi