The Empire Of Cruelty

The Covid pandemic has brought an acute crisis of legitimacy for the Modi regime—not its first, but certainly its biggest. Where does it stand in terms of performance and popular perception as it completes seven years? 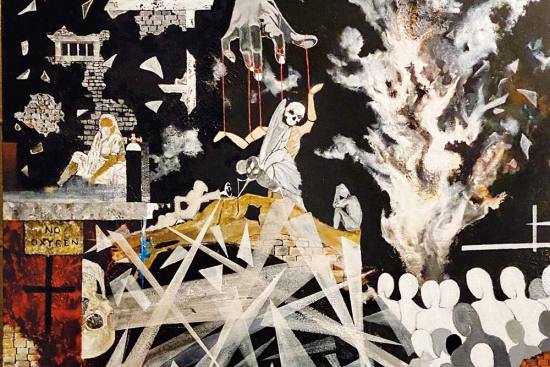 On May 9, Mahavir Narwal, father of Natasha Narwal, a student activist who led the Pinjra Tod ­movement, died of Covid. He could not meet, or talk to, his daughter before he died. She had been in Tihar Jail for over a year, charged under UAPA. If you had to pick any moment that exemplified the character of the Narendra Modi regime, this small story is perhaps as emblematic as any. It is a reminder, in miniature, that the Modi ­government, as it completes its seventh year in power, is presiding over unfathomable scenes of death and suffering. The pandemic’s second wave would ­probably have hit India hard under any ­circumstance. But there is no question that the Modi government’s ­indifference, incompetence and ­callousness has given the empire of death a greater rein than it otherwise might have had. But the story is also emblematic in other ways. A young student activist is in jail charged under anti-terror laws. It is a reminder that the government has converted ­political protest or small transgressions of the law into acts of treason; it uses law as an instrument of repression. It ­showcases the ways in which independent institutions in India—like the courts—have, with a few exceptions, failed to uphold basic civil liberties or substantive due process. Natasha was accused of being part of a premeditated conspiracy leading up to the Delhi riots. The fact that she, like many political prisoners, was charged under UAPA, while those from the ruling party who openly incited violence are roaming free, is a measure of just how openly communal and partisan the State has become. And then there is the individual poignancy of the story that will be lost amid all the political recrimination: a father struggling to get relief for an idealistic daughter who was imp­risoned by the State, a comrade-in-arms really, and dying without being able to see her.