Tamil Nadu Assembly Elections: The Lord Murugan Factor And How BJP Can Ride 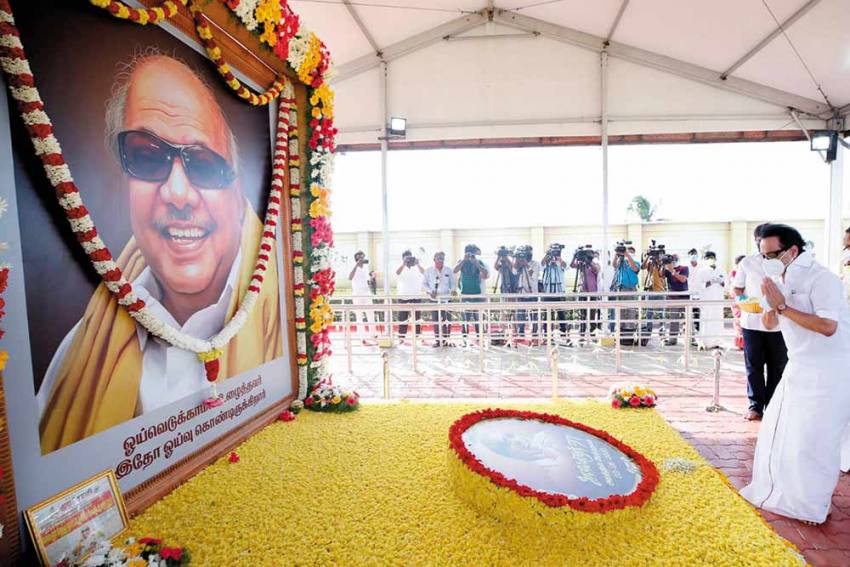 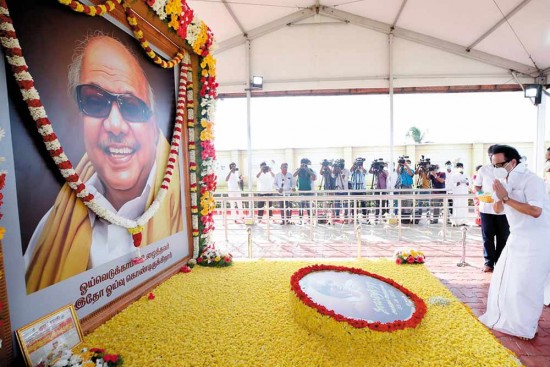 “The majority of OBCs in Tamil Nadu are Hindus and the DMK helped bring 65.5 per cent reservation for them, which helped the community produce doctors, engineers and graduates,” DMK leader M.K. Stalin claimed recently. Such an assertion from Tamil Nadu’s oldest Dravidian party represents a significant departure from its past, when it had fought shy of showing the Hindu card. Steeped in the anti-god, anti-Brahmin and anti-Hindu philosophy of its ideological fountainhead Periyar and piloted for long by the Hindu-bashing M. Karunanidhi, the DMK endured a rough ride with the state’s Hindu majority. The party could remain one of the top two contenders thanks to its devoted vote bank and the absence of Hindu consolidation. It took full advantage of Hindus voting more on caste lines, and by swinging Muslims, Christians and a section of Dalits.

Until now the party rarely viewed the OBCs—nearly 70 per cent of the state’s population and a substantial chunk of the DMK’s vote bank—through the Hindu prism. For the DMK, they were Tamils who were not Dalit, Muslim, Christian or from the privileged castes. So what compelled Stalin to revisit the Hindu roots of the OBCs? Hindu outrage against a rationalist group’s video about Kanda Sashti Kavasam, a Tamil religious song on Lord Murugan, was astutely redirected towards the DMK and its ideological cohorts by the BJP-led Hindu right, who called the video a culmination of the persistent “anti-­Hindu tirade” by the DMK and its allies like the Dravidar Kazhagam, the Viduthalai Chiruthaigal Katchi, the Left and some fringe Tamil groups. On social media, the blame was squarely laid at the DMK’s doors by digging up its past support for such rationalist groups. The party quickly distanced itself from the group and even reminded Tamils that it had one crore Hindu members.

And then Stalin pitched the OBC angle to undo the allegation that the DMK is anti-Hindu. “In the past, the DMK used to dismiss any anti-Hindu campaign as merely anti-Brahmin,” says Naryanan Tirupathi of the BJP. “But the attack on Lord Murugan has changed that narrative as Murugan is worshipped by all Hindu communities in the state and outside, especially by OBCs and Dalits. Hence the DMK’s newfound discovery that OBCs are also Hindus. The video was also a crass ­attack on the dignity of Tamil women. So it was shocking that the top leadership of both the Dravidian parties never even condemned it outright.”

The DMK’s silence was all the more troubling for having flaunted itself as the leading protector of Tamil interests. Here was a Tamil song in praise of a Tamil God—the youngest son of Shiva and Parvati, and also considered a tribal king who belonged to Kurinji, the homeland of Tamils—being ridiculed and the DMK chose to look the other way, until the taunts started to sting. “Apprehending that this sentiment could cascade into a popular movement and be exploited by the BJP to expand its footprint in the 2021 assembly ­elections, Stalin had to neutralise the threat by stating that his party was not against Hindus,” says Rangaraj Pandey, editor of Chanakyaa media channel. “And he had to substantiate this claim by pointing out that OBC Hindus had benefited most by the DMK’s social ­justice platform.” Stalin also had to list other ‘Hindu’ achievements of the DMK—reviving pujas in abandoned temples, restoring temples and temple chariots, and introducing legislation to appoint people from all castes as ­temple priests.

Stalin cannot be faulted for falling back on his party’s record with regard to the OBCs as the DMK has been steadfast on its social justice agenda. That is bound to resonate more with his core supporters than his party’s rec­ord about temples and their upkeep. He also alleged that the BJP has sought to dilute reservations for OBCs, citing the Centre’s failure to reserve seats for OBCs in PG medical courses under the central quota and its latest move to bring in salary as a criterion to determine the creamy layer for OBC quota.

“The BJP is simply tossing the PG medical course matter between the Supreme Court and the high court rather than stating the number of seats meant for the OBCs,” says DMK spokesperson A. Saravanan. “Also, it is wrong to say Stalin is raising the issue of reservation for OBCs only to ­counter the propaganda unleashed by the BJP. Reservation has always been part of the DMK’s DNA.”

For the BJP, trying to expand its presence in what its opponents describe as the “insurmountable land of Periyar”, the DMK’s discomfiture over the Kanda Sashti Kavasam video proved godsent. The saffron party had used the same line on the DMK being anti-Hindu ahead of the 2019 Lok Sabha polls, but it got lost in the din of the strident anti-Modi ­campaign by the DMK. The national party had been badly buffeted by ­constant badgering from Dravidian ­outfits and fringe Tamil groups for ­attempting to impose the Brahminical brand of Hindutva and languages like Sanskrit and Hindi on Tamils. 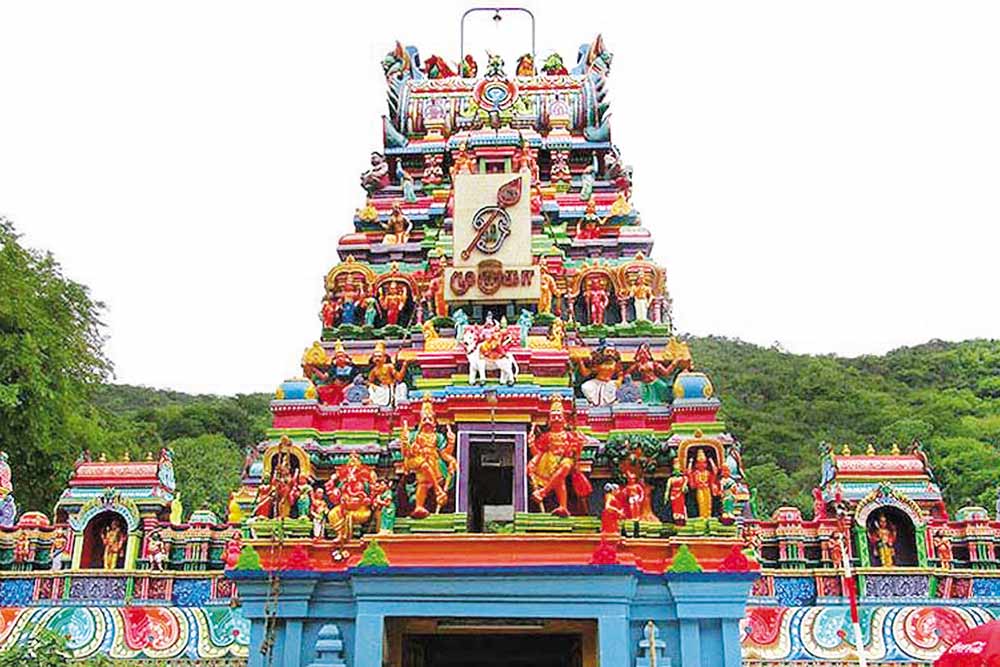 The DMK’s ­discomfiture over the Lord ­Murugan video proved ­godsent for the BJP.

The BJP’s onslaught this time also got propelled by the persistent work of a few pro-BJP campaigners who used their social media platforms to point out the alleged nexus of the DMK with rationalist and fringe Tamil groups. They had already tried to show how certain activities of these groups had indirectly aided the DMK, and these videos also notched up a solid number of followers. So, when the Kanda Sashti Kavasam video arrived, they could oversell it as another instance of the same anti-Hindu rationalist-DMK link.

Tamil Nadu has been an inscrutable fortress that the BJP failed to breach. It last had an MLA from the state in 2001 and, barring one Lok Sabha seat it won in 2014, its electoral record has been spotty. The party wants to live down its image of being ‘lower than NOTA’—it polled fewer votes than NOTA in the 2017 RK Nagar assembly byelection, which T.T.V. Dhinakaran won as an ­independent. The BJP has also ­attempted to shed its pro-Brahmin image by broadening its social spread. It appointed L. Murugan, a Dalit from the very underprivileged Arundathiyar community, as its state president, ­ignoring the claims of many seniors.

The party also appointed OBCs as office-­bearers, but only those with ­popular recall—for example, Vidyarani, ­daughter of sandalwood smuggler Veerappan. As she belongs to the ­powerful Vanniyar community, caste calculations also worked in her favour. The party has also readily admitted leaders who defected from the DMK and the AIADMK as their familiarity among voters could help increase its reach at the grassroots.

“This is mere tokenism that will not cut ice as the BJP is still viewed by the people of Tamil Nadu as a party of the privileged castes,” says the DMK’s Saravanan. “Its poor electoral record combined with control by the RSS would prove to be the BJP’s biggest stumbling block. It may get media mileage with a few controversies like now, but not votes.”

According to BJP sources, the party’s immediate goal is to improve its voteshare during the 2021 assembly ­elections from an abysmal 3 per cent to anything above 6 per cent. “Even a first timer like Kamal Haasan could poll 4 per cent in the 2019 Lok Sabha ­elections,” says political analyst Raveenthran Thuraisamy. “The BJP needs to prove its growth without ­depending on the AIADMK or Rajinikanth. So it is preparing to fight the 2021 assembly elections with its own caste configuration that would include two sub-sects of Dalits and the religious minded among the Nadars. The non-Brahmin forward classes have also softened towards the party after the EWS quota in central jobs.” With Lord Murugan as its wingman, the BJP hopes it can better its showing.