Can public art in India, depicting admirable women from history and mythology, shed the male gaze?

You can’t miss the majestic Yakshi statue while walking across Malampuzha Gar­dens in Palakkad district, Kerala. Facing the Western Ghat mountain ranges, the voluptuous naked Yakshi, one of Kerala’s most popular statues, sits with her legs wide open. Sculpted by Kanayi Kunhiraman, the Yakshi—herself a powerful creature from mythology—emb­odies unabashed and unapologetic self-­awareness of sexuality and power, claiming owner­ship of herself and her body. The statue is the embodiment of feminine energy.

Another feminine figure, the historical figure of Rani Laxmibai of Jhansi, is always depicted with an open sword riding a horse, carrying her infant to battlefield—show her fierceness as well as vulnerability. Same goes for the BSP supremo Mayawati, a Dalit who rose to become chief minister of an extremely caste-ridden state.

Multidisciplinary contemp­orary artist Seema Kohli says, “In case of all these women—Yakshi, Rani Laxmibai and Mayawati—sculptures bring out their vulnerability and strength, and are often made in stone or metal. The mediums are chosen to reflect and express inherent characteristics of these figures—historical or divine.”

But are nude statues of women a passive symbol of female power, or are they just subjects of the male gaze? The term ‘male gaze’ was coined in 1975 by film critic Laura Mulvey as a res­ponse to how women were depicted in visual arts and literature as passive, dehumanised repres­entations of male sexual desire. Having said that, we also have exquisite examples of the male gaze on the male body in art as well, such as the statue of David by Michelangelo, or anci­ent Greek statues of warrior athletes, or Rodin’s The Age of Bronze.

But coming back to contemporary India, do misogynistic politics influence public statues depicting women? Most contemporary statues of women in the public space are of political leaders. These are by nature reverential and hence, don’t pander to the ‘male gaze’. Pointing at ancient statues, author Kiran Manral says, “Ancient statues have been depicted as full-­bodied and sensual. The most powerful sta­tue of a woman in India, I would think, is the 30-ft Yakshi in Kerala. It was made by a man, but is a statue that unapologetically owns the sensuality of its body. That by itself is empowering to look upon.”

An important statement in the mesmerising Yakshi statue is her stance and nakedness—with her hair open and flowing, arms raised, shoulders relaxed. Manral adds, “I wrote a short story in a feminist fantasy anthology inspired by the sensuality of the Yakshi statue, and the repressed power of another statue of a Yakshi, made by master sculptor Ramkinkar Baij, which stands outside the RBI building.”

Jasuben Shilpi’s statue of the Rani of Jhansi in Gwalior—astride a horse rearing up on its hind legs, her right arm holding a sword aloft, leading her army into battle—is a figure of valour. This is an immensely powerful portrait of a woman who rode into war at a time when women were confined behind the purdah, and commendably depicts the determination of a woman who would not bow down to invaders.

Art panders to the male gaze in India, as it is an integral part of our society. It is the same with our movies and songs of popular culture. Manral says, “When the gaze of the man on the woman does not consider the woman as a human being, but merely an object of desire and lust, I would say that is the ‘male gaze’.”

For centuries, artists tended to be men and there was certainly an affinity for painting or sculpting the body—whether realistically or vicariou­sly—which has been beautifully explai­ned by John Berger in his book Ways of Seeing—a compulsory read for anyone interested in art or gender studies. Cha­llenging the puritan male gaze in art, Seema Kohli says, “The world over, all of society, not just the Arts, has been at the receiving end of the male gaze as a result of patriarchy. But already, it’s declining as a more egalitarian society is being infused with women in all fields and at all levels contributing to a righting of their work and beliefs. For myself, I believe in walking the path I have taken in the hope it helps build the society we all want to be part of now and in the future.”

Most statues of India are made from the male point of view, perhaps because we didn’t have enough female artists creating public statues. Hopefully, we can rectify that in the years to come. We have had iconic female sculptors like Leela Mukherjee, Meera Mukherjee, Piloo Pochkanwala, Usha Rani Hooja, Jasu Shilpi, to name a few, and they have created fabulous work, which includes statues of women.

But shouldn’t female statues be all about honouring the female gaze instead of slaughtering it at the altar of the male gaze? And why do we still have this obsession with women’s bodies? Feminist writer Meghna Pant says, “The worth of a woman in India is still tied to her looks. Because men think they control women’s bodies, since they cannot control their minds.” 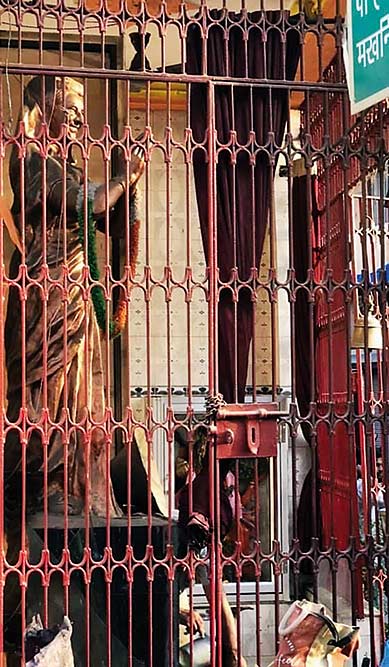 PM on a pedestal Indira Gandhi’s statue in a temple in Patna. Photographs: Chinki Sinha

Others would say it is time to celebrate the woman’s body without any prejudi­ces. If there is a fault, it is in our gaze, because there are as many nude male figures as there are female ones. Kohli says, “There is a certain philosophy and reason behind all these sculptures and statues. But of course, looking at historical examples from the contemporary per­iod can lead to misrepresentation and objectification by the male gaze. Which is why I feel that we must change our thinking, before our gaze changes.”

Women in India are still considered to be slaves of the male gaze. Because, judging women is not ultimately about their looks but about the man’s ability to tell her what to do about their looks. To make sure they know they are being surveilled. So the question is, why can’t we stop making (and judging) statues of historical women following conventional standards of beauty?

Pant states the masculine privilege of pronouncing judgments on a woman’s looks will stop only when women stand up for their gender and stop letting men control their perception of beauty. “We need to shed unequal para­meters of male and female beauty. Beauty is not an imaginary weapon wielded to drive women’s insecurities to distraction. Whether a woman chooses to be processed or unproces­sed, in the body or mind or both, it must ultim­ately be her choice, not a representation by a statute designed to appease the male gaze.”

ALSO READ: The Cost Of Piety, A Mirzapur Dirge 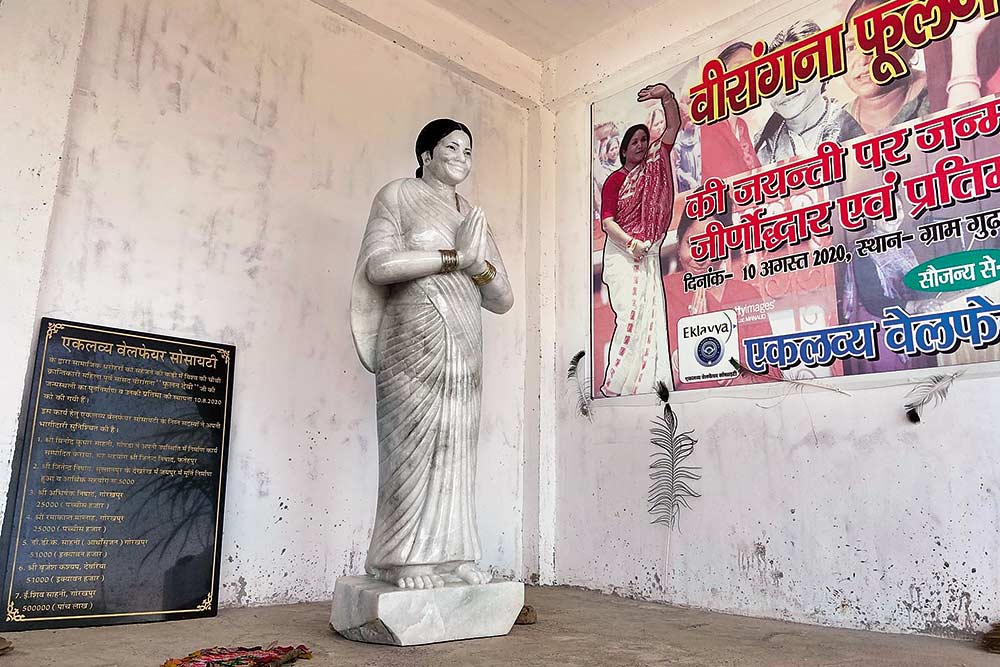 Powerful Symbols Phoolan Devi statue in her home in Chambal

In ancient and medieval India, a greater number of women were depi­cted in temples and public places. Sculptures of mythological tran­s­gend­e­r­ed figures such as the ardh­ana­rishwara provide evidence of the recognition of all genders. One would argue it requires a trained and evolved aesthetic sense to appre­ciate sculptures and art in public arenas. However, this does not negate the question of female figures ima­gined with the male gaze and what that signifies.

ALSO READ: Why Statues Of Dogra Kings Are Political Fodder For Kashmiri Politicians

Professor Poonam Gandhi of the department of sociology, FLAME University, Pune, says, “Ramoji Studio in Hyderabad has installations of several scantily clad female statues, meant for titillation and not to commemorate women in cinema. The objective is to use women and their bodies to rake in footfalls.”

India is also the land of ascetics and we have male nude statues which embody asceticism and transcendence to the other world. How­ever, we do not necessarily perceive women to have transcended to those realms. Depicting powerful women achievers—not necessarily political figures—in public spaces would lead to women getting a sense of belonging with the space which was hitherto considered a male bastion. Imagine what a city and a nation which embra­ces diversity in public art would do to create inc­lusivity and celebrate achievements equally. We have to distinguish and view this from the lens of aesthetics and feminism, and not allow either to cloud our lens completely. 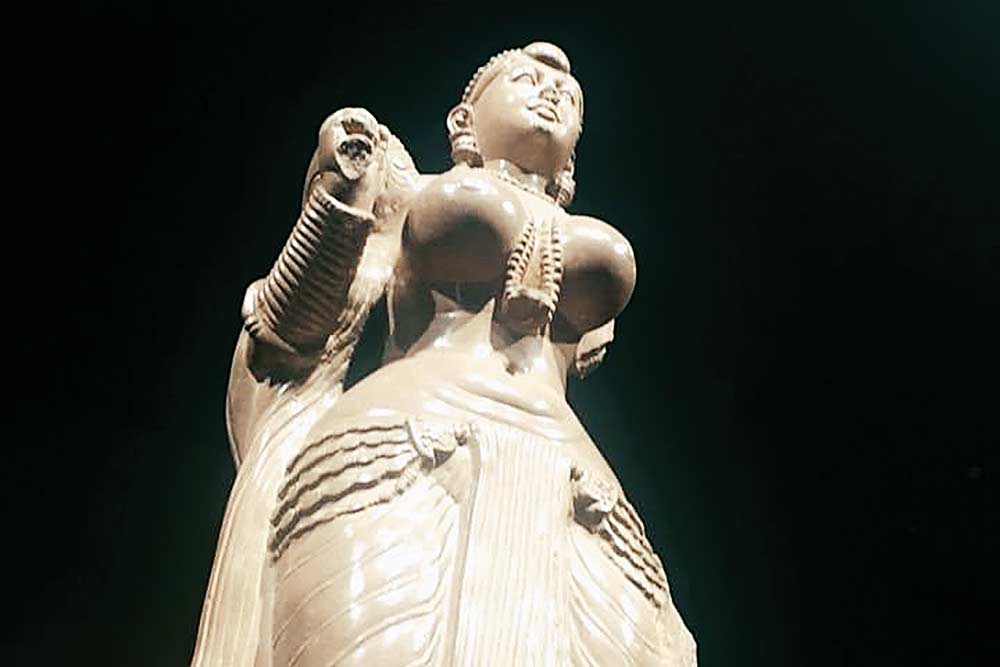 Male statues making headlines makes one wonder—why aren’t there equal number of statues highlighting women achievers? A few years ago, there was a furore over Wall Street’s ‘Fearless Girl’ sculpture, a temporary installation, which attracted criticism from some quarters for invading New York’s financial district, considered ‘a male space’. How many such statues depicting women and their achievements exist?

Another controversial sculpture, of trailblazer feminist Mary Wollstonecraft, who passionately fought for women’s rightful place in society, led to its sculptor Maggi Hambling being criticised and questioned for its nudity. In response, Hambling clarified that it is not Wollstonecraft herself that she has depicted, but a celebration of Wollstonecraft’s ideas via an everywoman figure.

Do nudity and women’s representation in art have to highlight women’s bodies and curves? There have been debates around female statues being objectified and shamed by men with no understanding or reverence to the work and its symbolism. Gandhi explains that the male gaze which invokes the sexualised way of looking, empowering men and objectifying women, directs our attention to the female nude, semi-clad statues in public spaces. Is it not obvious that visual art has responded to masculine voyeurism which tends to sexualise women for male viewers?

(This appeared in the print edition as "Reversing the Gaze")