Song Sung Blue: The End As A New Beginning

How will the world end? With a whimper, as Eliot predicted? Or in a yawn, as Pope said it would.

More from Arundhathi Subramaniam
View All

This is the way the world ends/Not with a bang but a whimper, poet T.S. Eliot wrote a century ago. Two centuries before him, Alexander Pope spoke of the world ending with a ‘yawn’– after a long pandemic of dullness. If those are symptoms of doomsday, we can safely conclude we’re far from it. The phantasmagoria we’re seeing today was surely dreamt up by a more reptilian brain. What else could have conjured up such a cocktail of doom, with every ingredient associated with cel­estial wrath and retribution—pestilence, death, floods, cyclones, earthquakes, locusts alongside burning forests, clinical depressions, scorched relationships and combusted jobs? One thing is clear: for the breath-rationed and the bereaved, this isn’t the time of the whimper. Or the yawn. The Covid era is one of the gasp.

And so, 2021 draws to its close—at the end of which we probably know more about the Greek alphabet than the virus. I have lost several dear to me. Some haven’t. But we’ve all had our share of thoughts about endings. I read the Sartre play decades ago. But when the doors slammed shut, and we were left with the mind-numbing chatter of our minds, the phrase that rang catatonically through my days was ‘No Exit’. Energetically, this was stasis. Scripturally, this was pralaya. Experientially, this was the dead-end. Witnesses no longer, we were participants—perpetrators, victims, agents, colluders, confronted by the fin­ite rhythms of our breath, and the grim consequences of collective irresponsibility. No hands were unsoiled. No gaze was innocent.

ALSO READ: Brave New World Under The Shadow Of The Pandemic

Blame games and conspiracy theories have abounded. But shifts have happened too. Almost everyone, irrespective of age or cultural background, seems to have attempted some brand of life audit. “I am dying,” a terminally-ill woman once told a Tibetan monk. “So are we all,” he rep­lied, and because he spoke from daily experience, not fridge-magnet wisdom, she instantly trusted him to guide her through her death process. Mortality has alw­ays looked us in the face. But it’s not just the Tibetan monk of the anecdote who knows it today; we are all far more sharply aware that the cadaver’s face could be our own. And Shiva’s tandava is the dance of freedom we might be capable of if we knew how to be present at our own cremations. In short, if we knew how to be responsible for our own lives—and deaths.

This is not to underestimate the horror, or to trivialise the consequences for the poor and disenfranchised. But with the imminence of death, the experience of life does somehow grow sharper. I know an octogenarian who has suddenly found herself writing poetry. Friends seem to be picking up long-forgotten musical instruments and reading lists, trying to heal festering relationships, changing the ground rules of their work lives, rekindling forgotten friendships, gardening, making time for meditation, moving out of big cities, walking the beach. 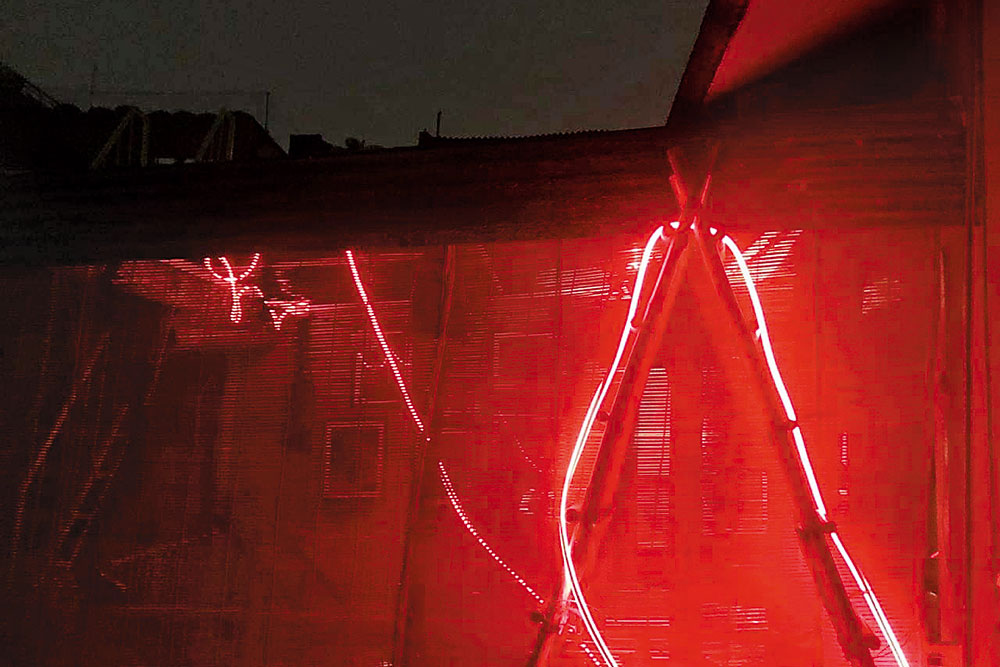 And what has become of viraha—that experience of separation, immortalised by so much secular and sacred literature? Think of all the songs and poems we know about separation—of being parted from lovers, spouses, parents, natal homes, motherlands, heaven or the div­ine. I have found myself thinking recurrently about Meghaduta, that classic love lyric by Kalidasa, in which a pining lover asks a passing cloud to del­iver a love message to his beloved wife. But the Cloud has taken on an entirely new meaning for us today. And with the dailiness of Zoom and WhatsApp, we have all turned, matter-of-factly, into time travellers. No more fluffy cloud couriers for us. Even while our physical doors were shut, our digital windows have been open to friends, colleagues and families—invented and inherited—around the world. A radical shift has been embraced with staggering ease! As so many ideas about space and time have been tossed neatly out of the window, the human imagination will surely never be the same again. Was it the spiritual teacher, Mooji, who said that learning to live apart in time is learning to live together in eternity? I’m beginning to suspect we might have had a foretaste of that eternity.

I am also struck by how many unlikely people seem to be talking of listening to the ‘heart’. What was seen as mere escapism, the resort of dilettantes and New Agers, now gradually app­ears to be part of an urgent process of self-rec­overy. What’s more, something could well be shifting. With the alchemy of attention, as the Bhakti and Sufi poets tell us, psychological and spiritual wounds turn magical, even sacred. “The wound is the place where the Light enters you,” Rumi said (in what is now a much-recycled WhatsApp message). If a finger on a button can annihilate the world, perhaps one finger can save it? If we ret­rieved all the life ene­rgy that we kept frozen in pockets of pain, hurt and mistrust, perhaps that finger could even be ours? That could well be the power of the sovereign human being, no longer willing to outsource responsibility for her life.

ALSO READ: Doomsday Is Not In The Future. It’s Here And Now

Yes, the word ‘apocalypse’ hangs heavy in the air. But the thing about being Indian is that we don’t really believe in endings, do we? We find it difficult to subscribe to anything so conveniently terminal. The Tibetan idea of the bardo—as an int­erval, an in-betweenness not just between lifetimes, but between breaths—has alw­ays resonated deeply with me. I have long been fascinated by commas rather than full stops. Surely caterpillar dreams turn apocalyptic when they dissolve into green mush in their coc­oons? It must feel terrifying—a bit like turning from alc­hemist to the swirling contents in a conical flask. Or to use a Biblical image, from free agent to Jonah in the whale’s belly. A nightmare, yes. But is it the end, or could it be the interregnum—the reboot, the bardo? 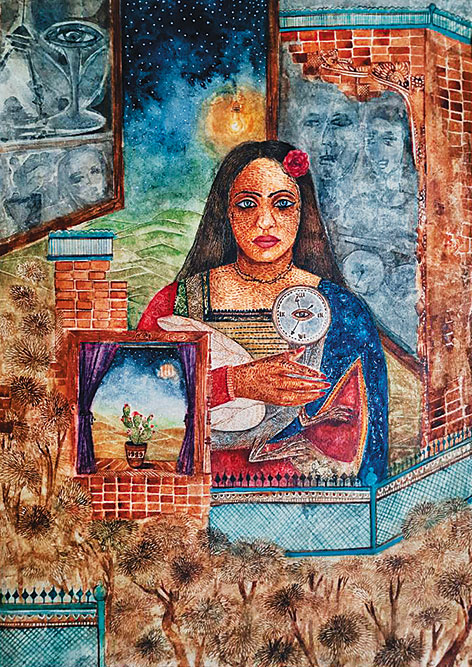 The Sanskrit dramatists tell us life has its tragic moments, but no tragic endings. We aren’t the land of King Lear and Oedipus, bec­ause we have always known that fallen heroes get a chance to rewrite their scripts—even if it is in another lifetime. Scholar Bihani Sarkar points out that classical Sanskrit playwrights invariably have “tragic middles” in their plays. These are the moments of rupture—identities are questioned, ethical systems turn turtle, exi­stential questions raise their heads, every nightmare of abandonment, separation, loss and despair is played out. But it is still the middle. The pause. The other half of the play is yet to unfold. And it does. But even when the trauma of separation is healed by union, it is not a simple “happily ever after” ending. For, it is not merely circumstances that have changed. After the ‘tragic middle’, we are irrevocably changed.

Perhaps the Covid moment, then, is our bardo. The moment when we see—upfront and un-photoshopped—the grimy consequences of living with fragmented gazes. We’d like to blame our gods, our ancestors, our parents, our politicians, each other. But for how long? Until we “all fall down”, as the old nursery rhyme goes? Maybe it is time to abandon the playground politics? Time to embrace a new way of engaging with the world, rooted in the knowledge that the fundamental problem is our own div­ided, hierarchical minds? Perhaps the apocalyptic future then is for those who live in the past. For those who live in memory. We wake daily to yesterday, I wrote in a recent poem, a fragment of which I reproduce here. It’s been a memo to myself when I find myself gnashing my teeth over current affairs:

We wake daily to yesterday….
And the apocalypse is where it always was:
in the tiger-infested, guerrilla-stalked heart
we’ve carried around forever
and even the dictator’s face
is a cartoon
we drew one night,
drunk
and wildly unoriginal,
and kept meaning to erase,
except that we somehow got  busy.
(How did we get so busy?)

Upside-downness, we are told, is a sign of the quickening of the spirit. Mystic poets down the ages have used the language of absurdity and opaque paradox—ulatbaasi or sandhyabhasha, twilight language—to speak of this. A tree with its branches in the earth,/Its roots in the sky, says Kabir. An ant flew into the sky/ She swallowed the sun, says Muktabai. The deer with the tiger’s head,/ the tiger with the deer’s head, says Allama Prabhu, in a line reminiscent of the Isaiah image: The wolf shall live with the lamb. Tukaram says: When he comes out of the blue--/ a meteorite/ shattering your home.../ be sure/ god is visiting you.

If ‘god’ is a loaded word, we could try ‘life’ ins­tead. The weather is cyclonic. Imagine the planet lurching and pitching in a galactic tempest. Pots and pans, furniture and microwaves, loved ones and livelihoods are flying around the room. When they settle, the map of our lives will look different. What’s more, seasick, storm-tossed, and yet more deeply ourselves, we will be different. But there’s some consolation in knowing that for the great goddess, Life, it’s just another day in Her crazy laboratory.

(This appeared in the print edition as "Song Sung Blue")

The Good Earth: Resilient And Resourceful

Love Is A Many-Splendoured Thing

Death, Up Close: A Photo Essay On The World Of Dalit Morgue Workers

Almanac Of Darkness: An Essay On Life And Love

The Migrant Worker As A Tragic Hero, From Reel To Real

A Nation Without Humour: Why Is India Afraid Of Stand-up Comics?

Patna Through The Eye Of The Third Kind

The Gilded Cage: Kashmir In Winter Of An Apocalypse

Life In A Hashtag: A World Overwhelmed By The Digital Wave

Pandemic Pangs: When The World Looked Inward For Succour

AFSPA: A Night Of Detention And Torture

How Covid Has Hit Sports And Spectators Around The World

A Tale Of Two Pandemics

Love, Loss, Longing: A TV Show Which Throws New Light On The Pandemic

Arundhathi Subramaniam is a poet and author. Her most recent work is Women who wear only themselves