Journalist's Arrest: In Manipur, Judic­iary Is Being Progressively Dwarfed By Executive 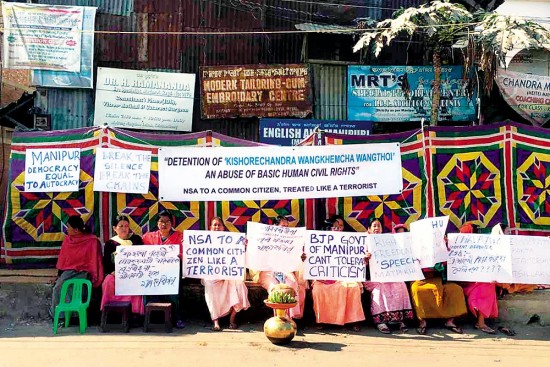 The controversy over the arrest of TV anchor, Kishorechandra Wangkhem, and his subsequent jail sentence is a festering sore in the reputation of the BJP government in Manipur. Wangkhem was booked under the National Security Act, just because he posted a Facebook video in which he called chief minister N. Biren Singh a puppet of Prime Minister Narendra Modi. The government has come to be known for being oversensitive to criticism, clamping down on anyone making adverse remarks against it, even on social media. Kishorechandra is the latest case but there have been similar outlandish arrests before him.

Kishorechandra was booked twice for the same Facebook post. The first was on November 20 on sedition charges but was set free on November 25 after a chief judicial magistrate’s court ruled that the post was just an “expression of private opinion in street language”. Then, in what was seen as vengeful overkill, the government re-arrested him on November 27, overruling the court’s verdict, this time under the NSA. How a man’s criticism of the government and his foul language are a threat to national security has not been explained.