A seemingly imploding agitation against three contentious laws found a new lease of life after a teary appeal from Jat farmer leader Rakesh Tikait. What next for the farmers who have vowed to carry on till the laws are repealed? The face-off with the government just got more intense. 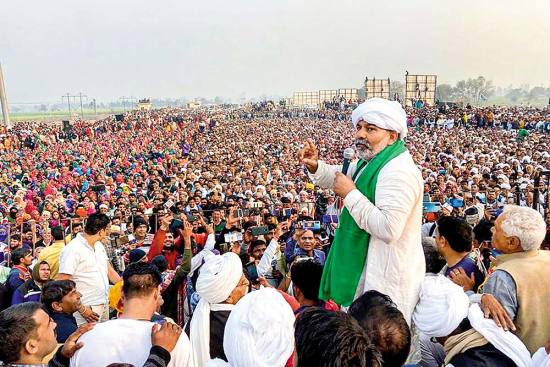 Time is a great healer, they say. On January 29, many in western Uttar Pradesh’s Muzaffarnagar stood witness to a moment of rapprochement that could inflect India’s political history—or not. It’s vital to offer that caveat right at the outset. For, the unseen undercurrents of our politics do not necessarily submit to neat surface syllogisms. Contrary pulls make up our political psychology to such an extent that its effects often seem irrational. And yet, when leaders of two communities—Jats and Muslims—came together to address a mahapanchayat in Sisauli village, no one could be faulted for seeing in that event a kind of tectonic shift. The ground itself moving...but back to its original, organic whole. Towards a suture, towards healing.

This needs the backstory. Healing presupposes a wound, and this one was of the order of a mini Partition. The death toll in the Muzaffarnagar riots wasn’t high—only about 60—but the incidents spoke of a complete social amputation. Over 50,000 Muslims found themselves wrenched away from their old homes, like uproo­ted trees, never able to go back to their soil. It happened in 2013—a year before the Modi era began formally. Muzaffarnagar’s Jats—the same land-owning farmers who have now edged their way to the centrestage of the farmer protests—­violently sundered their old ties with local Muslims. Economic ties, as much as social—­typically, the Muslims were landless and worked on the Jats’ farms. That whole eventscape had underlined one fact in blood: the Jats, a socially cohesive rural community spread over a continuum in north-western India, but somewhat outside the classic Hindu varna order, had been won over by Hindutva. This applied nearly ­unfailin­gly across western UP, Haryana, Delhi and Rajasthan: the Jats became one of the most reliable social bulwarks for the BJP in the years to come. Jat leaders from the Congress moved over or threatened to; young Dushyant Chautala, of Jat patriarch Devi Lal’s lineage, splintered from the INLD and is in alliance with saffron, as Haryana deputy CM; others like the promising Jayant Chaudhary, grandson of the iconic Chaudhary Charan Singh and RLD leader, found the going tough. Even the wounds of demonetisation couldn’t make the Jats budge from their new ­affiliation.