Rice In Deep Water! Why Green Revolution Is Facing Watery Death In Haryana

Rapidly dwindling water table is putting Haryana farmers in a dilemma. The government is discouraging harvesting water-intensive crops as agriculture alone consumes 80 per cent of groundwater. 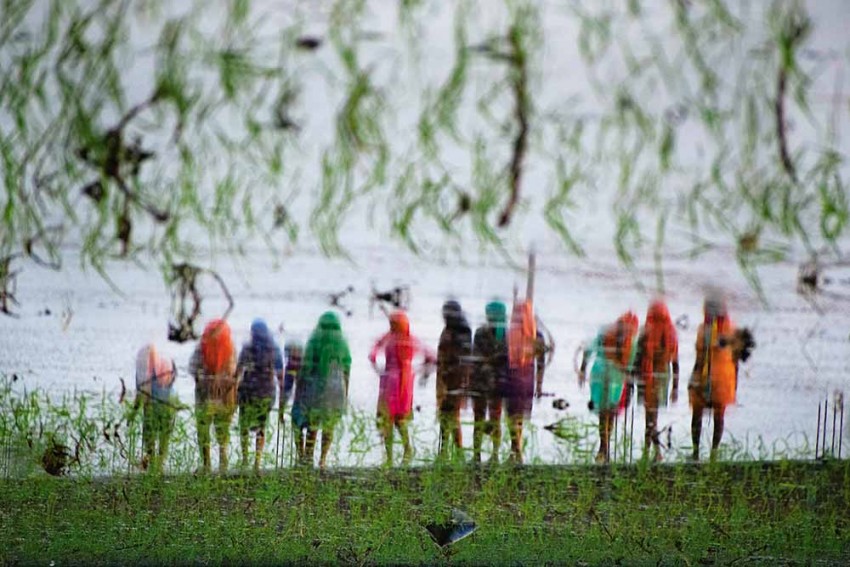 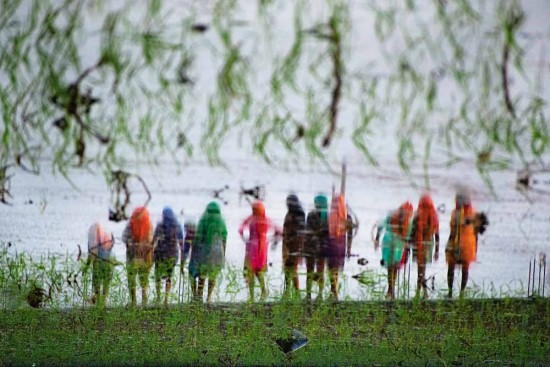 That it has yanked the government into action suggests the situation must have been seriously alarming. The average water table in Haryana has gone down by over 10 metres in the past 20 years. In the regions where paddy is grown, water levels have been depleting at the rate of one metre every year. The crop’s appetite for water is immense—the production of just one kilogram requires close to 5,000 litres.

To check the rapid depletion, the state government came up with a solution two months ago—encourage farmers to grow non-paddy crops such as maize or pulses. One kilogram of corn requires 1,000-1,500 litres of water. To incentivise production, the government gave them seeds for free, a cash dole of Rs 2,000, and the promise to procure the grain at the minimum standard price (MSP) of Rs 1,700 per quintal. The goal of the scheme, named Jal Hi Jivan Hai, was to divert 50,000 hectares of paddy in seven dark-zone blocks (where the withdrawal of groundwater exceeds its ­recharge) of as many districts to other crops.

The scheme made farmers apprehensive—will the yield be as much as that of rice? Will the government procure the produce? What if the crop goes bad? It was the state that spurred farmers to grow rice more than 50 years ago during the Green Revolution. Decades of paddy farming in the kharif season, the ample yield and the familiarity of it has led to complacency amongst farmers who view maize with suspicion and reluctance. However, government officials organised meetings with farmers and offered free insurance to instill confidence in them. Eventually, the government managed to meet the target of 50,000 hectares and enlisted farmers who agreed to grow paddy instead of other crops.

Rajender Tyagi, 57, a farmer in Sonipat’s Ganaur, grows rice, wheat and vegetables. Ganaur is one of the target blocks of the government for crop diversification. “Maize is not profitable as the government does not acquire it. There is a greater likelihood of stray cattle ruining the crops. They don’t enter rice fields because of the water,” says Tyagi. He believes the government has been soft in the scheme’s ­enforcement this year in view of the upcoming assembly elections, but will be strict from next year onwards. In ­addition, there is distrust regarding the government’s promise of insurance. “Byaah ke saare geet sachche hote hain kya (Do all the songs that people sing in weddings come true)? You never get insurance money,” he declares.

The concerns of the peasants vary across districts in the state. In Karnal’s Assandh, another target block of the scheme, it is the risk of damage caused by rain that deters farmers. “If we grow maize in this season, rain poses a threat. Maize can’t tolerate much water. Only paddy can stand the water that we get during monsoon,” says Avtar Singh, 34, resident of Dera Phula Singh village. “Even though the groundwater here is of poor quality, its level is good. The government should discourage paddy in areas where the water table is low.” 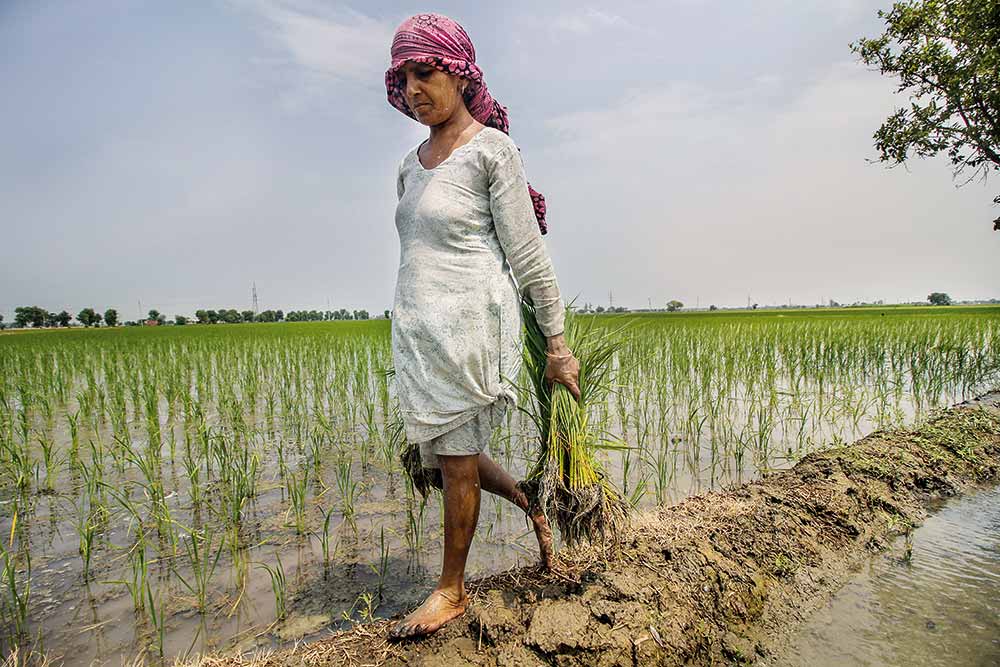 Avtar did not plant maize in his fields. His fears of rain ­destroying the crops have been validated by the flooding in parts of Kurukshetra, Ambala and Yamunanagar. In Kurukshetra alone, more than 1,500 hectares have been ­affected by the flooding caused by heavy rainfall. Vast swathes of land stand submerged in water. Even paddy, let alone maize, has been destroyed. Out of his 50 acres in Halalpur village, Sukhwinder Singh, 32, sowed maize only on eight, that too after the insistence of an acquaintance who works in the agriculture department. Of the eight, the crop on four acres has come to grief due to excessive rain. He was the only one in the village to have planted maize.

Sukhwinder’s cousin, Pradeep Kumar, 34, argues that farmers would have no issues in sowing corn if they were sure of the returns. “Say we plant maize. Rain will create problems later too by adding moisture to the grain. As a consequence, we won’t get the appropriate price. The buyer will tell us that the grain is of inferior quality and offer Rs 600-700 for a quintal. What do we do then?” asks Pradeep. There are also complaints about defaults vis-a-vis insurance money. In Mathana, another village in Kurukshetra district, farmers say the soil quality is not good enough for maize; it can only produce rice.

Officials, however, assert that farmers’ concerns are ­unfounded. “Before the Green Revolution, it was maize only that was planted here. It can be grown anywhere across the state. Besides, the floods have affected a very small area. The farmers who listed themselves under the scheme and do not plant paddy on the affected lands will certainly get their claims under insurance,” says Suresh Gehlawat, additional director, agriculture, and the in-charge of the scheme. “We promised farmers. The chief minister himself did it. It’s certain that they will get their due.”

He realises that shifting farmers from paddy to other crops has been an exacting task for the government as rice is ­remunerative. But, he says, the MSP of maize has been brought close to that of rice (Rs 1,750 per quintal), the yield per hectare is almost the same, there is a promise of procurement, and these factors together are making the government hopeful about the success of the scheme. Gurnaam Singh Charuni, state president of the Bharatiya Kisan Union, says the scheme will do well if the government buys the grain and farmers make as much money as they used to from rice. However, he too mentions the compulsions of farmers in areas with a high percentage of clay in soil, which is unfit for maize cultivation.

A.R. Chaudhri, head of the geology department in Kurukshetra University, says the scheme is an important initiative to check groundwater depletion as the agricultural sector alone consumes about 80 per cent of groundwater. “Depletion started in the 1990s, when the government made electricity free and farmers began using groundwater without consideration,” says Chaudhri.

He suggests some measures for using rainwater to recharge aquifers. “We should earmark natural boundaries of rivers sytems. After the creation of dams, the dry tracts are converted into agricultural fields. As a result of cultivation, the seepage quality of the soil nosedives. The collector in every district should ensure that natural river channels are not ­encroached upon,” he says. “In addition, urban areas should have dedicated stormwater drainage systems and the water should be diverted into earmarked channels. To further ­ensure percolation of water and recharging of aquifers, one-foot-high walls must be created in the natural channels at regular intervals. These will hold water, allow it to seep in and prevent it from running off.”

By Salik Ahmad in Kurukshetra, Karnal and Sonipat