Home  »  Magazine  »  National  » Cover Stories  » Covid-19 Testing »  Quarantine Over, Is It Safe To Meet Family? To Test Or Not To Test For Coronaovirus Is The Question

India has one of the lowest COVID-19 testing rates in the world. Experts reckon testing will have to be ramped up to know the success of lockdown. Will locally made kits help?

Late start
The US was slow in its testing, but ramped up the exercise when cases spiralled
Photo by PTI
Jeevan Prakash Sharma, Ajay Sukumaran April 03, 2020 00:00 IST Quarantine Over, Is It Safe To Meet Family? To Test Or Not To Test For Coronaovirus Is The Question 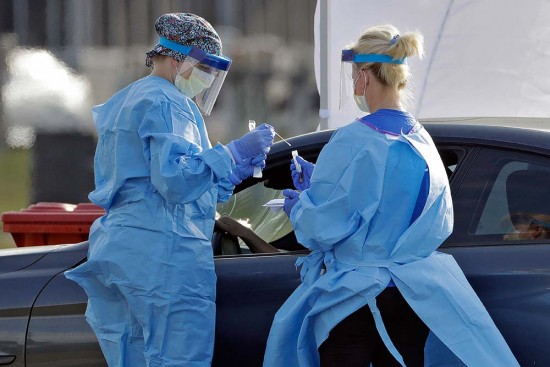 A Bangalore-based executive will complete his 14-day home quarantine this week. He is in a dilemma, though. Ever since he returned from an overseas business trip, he has been cooped up in a room in his home, peeking at his family only through a window. The solitary spell has been quite an experience. Initially, he grappled with anxiety as news of the novel coronavirus exploded. Days later, there was a visit from local health authorities, who stamped a quarantine seal on his hand—an event that piqued neighbours’ curiosity. From time to time, he got an IVR call: “If you have no symptoms, press 1. If you have cough, fever or breathing difficulty, press 2.” He has not gone beyond 1. Yet, knowing that people can be asymptomatic and still be infected with the virus leaves him with a nagging question as the quarantine comes to an end—is it safe to meet his family again? “The only way to know is by testing,” he says.

Facilities have indeed been ramped up and more people are being tested now—nearly 18,000 tests were conducted last week across the country, which was double the cumulative figure until March 22. In all, over 47,000 people had been tested by midweek (April 1). But the approach, however, is still calibrated. The Indian Council of Medical Research (ICMR) recommends only symptomatic people in quarantine, health workers and the contacts of laboratory-confirmed positive cases be tested. Besides this, hospitalised patients with severe respiratory illnesses are being tested as a COVID-19 surveillance measure. Overall, testing figures are still low compared to other countries and the available capacity—the utilisation rate stood at 38 per cent by midweek.

Both the health ministry and ICMR point out that isolation—if people adh­ere to the lockdown scrupulously—will be crucial in limiting the outbreak. Experts reckon that testing will regardless have to be ramped up to know whether the lockdown has succeeded.

“Everything moves on evidence. Simultaneously we have to monitor what the microbe is doing,” T. Jacob John, retired professor of clinical virology, Christian Medical College, Vellore, tells Outlook. The evidence, he says, will come from testing. “Epidemiology intelligence will tell you what you should be prepared for. In other words, you will be two steps ahead of the virus. Are we not moving two steps behind the virus now?”

Of late, there are indications that ant­ibody tests could be deployed—both Karnataka and Kerala have said they are making efforts to source these tests, which could be used to screen quarantined people. An antibody test is a quick blood test that can tell if a person was infected. But it’s not a diagnostic tool like the polymerase chain reaction (PCR) test that can detect the presence of the virus in a nose or throat swab. Nor does a negative result rule out COVID-19 infection, so there’s a limitation to antibody tests.

It’s more a pre-screening tool, exp­lains Dr V. Ravi, head of neurovirology at NIMHANS, Bangalore. “It’s fast, much cheaper and you don’t need exp­ertise in doing it. You can’t take swabs from thousands of people who are quarantined. You can screen their blood rapidly and if it is positive, you can take a swab immediately,” he says. Antibody tests haven’t been widely used for respiratory viruses, but since SARS Cov-2 is a new virus, people bel­ieve it will have some role in detecting exposure at this stage. “Antibody testing will tell you who was infected or what proportion of people were inf­ected. At any given time, you do an ant­ibody survey and then you extrapolate,” says John.

As of April 1, around 126 government-run labs were functional and 51 private labs given the go-ahead for dia­gnostic PCR tests. With these tests, vir­ologists look for a certain sequence that defines the virus by amplifying the nuc­leic acids that are in the virus. Many private labs have started work and their large networks, it is expected, will help further the reach of testing. “So far, sample collection has been done from homes of patients. We are now isolating a few dedicated centers for sample collection,” says Metropolis Healthcare Ltd, which began testing in Mumbai and is awaiting approval for operations in Delhi, Chennai, Rajkot and Bangalore.

The home collection method is similar to what was being done for H1N1 swine flu—phlebotomists collect nasopharyngeal and oropharyngeal swabs. But since they are outfitted in protective gear, it would likely require public education and awareness—a private lab rep­orted that a few of their clients were apprehensive that the pick-up would att­ract attention. Testing req­uires a prescription from a government-certified physician—the patient proforma rec­ords symptoms, history of travel, contact with high-risk patients among other details.

Indiscriminate testing too has its own problems, explains one medical professional. “Remember, when a test is indiscriminately done, there could be false positive results and false negative res­ults too.” The trace, test and treat/quarantine strategy is a trusted public health approach, he says.

Governments are trying to ramp up capacities. At the end of March, Kerala had 1.63 lakh people under surveillance, 7,485 samples had been tested and 215 positive cases were under treatment. The state government says COVID-19 care centres have been set up in all districts for people who were not residents of the state, like tourists, but had been advised home isolation. In Bangalore, fever clinics have been set up for people with travel history who develop COVID-19 symptoms.

“The government has asked all of us to get prepared, but did not give an indication of how large the testing requirement may be,” says Vijay Chandru of Strand Life Sciences, whose lab in Gurgaon expects to start testing soon. The lab, once set up, will have a capacity of 500-1,000 tests per day, he says. The government has recommended a cap on cost at Rs 4,500—this includes Rs 1,500 as a screening test for suspect cases and an additional Rs 3,000 for the confirmation test.

Currently, the probes for PCR tests are mostly imported. But there is some good news on that front—Pune-based Mylab, the first Indian company to get approval for a testing kit, says that it can manufacture up to 1 lakh tests a week, with kits costing one-fourth of the procurement costs of the imported tests. Mylab says its PCR kit screens and det­ects the infection within two-and-a-half hours as compared to an ave­rage of eight hours currently. “The kit has a unified screening-confirmation outcome, which means you don’t have to conduct two separate tests and thus, you save on time,” a company spokesperson says. Researchers have been working on other approaches—an IIT Delhi-designed probe-free method for PCR tests is among those being evaluated currently.

If ‘twins’ be the word, this mom is a supermom. Virologist Minal Dakhave Bhosale overcame the restricted mobility from adva­nced pregnancy to deliver India’s first coronavirus testing kit as well as a bonny little girl, just a day before the equipment was handed to the authorities. She and her team of 10 at Mylab Discovery in Pune delivered the kit in six weeks. “It was like giving birth to two babies,” she said. The kit—at Rs 1,200 each is a quarter of the Rs 4,500 the government spends on testing—red­uces the time taken for a result from eight hours to 2.5 hours.