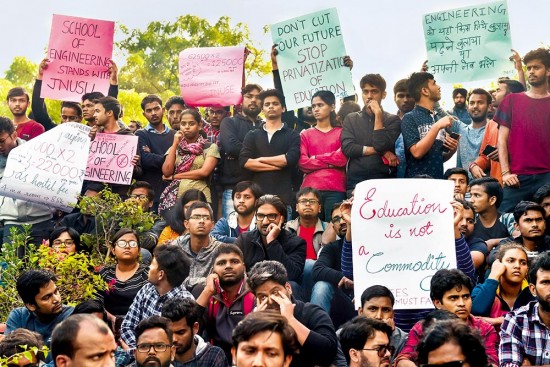 Education is a basic right, but ­almost 60 per cent of higher education in India is privatised, and unaffordable for most. For demo­cracy to be meaningful, education must be free for all so even the poorest can acc­ess it on equal terms, with special provisions such as reservation for marginalised sections. The bulk of government revenue comes from indirect taxes on what people buy—it’s their money and education is a tool for the poor among them to break out of poverty. The government, however, has been abdicating its responsibility of funding higher education. We are in the middle of a long battle against the designs of the government that has been steering public universities and colleges towards a self-financed model­—an agenda being pushed across the world, and which, at least in many European countries, has been stalled to an extent by student protests.

The revised National Education Policy (NEP), unveiled last month, says the government won’a legislate or regulate anything related to higher education such as courses, student-teacher ratio, fee ceiling, teachers’ qualifications and service conditions. It seeks to achieve deregulation through centralised cont­rol—the HRD minister will head the Rashtriya Shiksha Aayog that will make sure you deregulate fully! Every higher education institute will have a board of governors to decide everything, including how to handle dissent and which teachers to dismiss for speaking out of line. Two-thirds of its members will be government representatives and “public-­spirited individuals” from outside the INS­titute, who will likely be picked first by the Aayog, the only other overseeing body, to push a certain line in terms of course content, for example. Each institute also has to find a primary funder, whose representatives will no doubt intervene in deciding on cour­ses, fees and service conditions to ensure a profitable business model.