Home  »  Magazine  »  National  » Cover Stories  » Opinion  » Opinion »  They Need No Saviours, They Are the Saviours: What the Resolute, Unafraid Presence of Muslim Women Tells Us

They Need No Saviours, They Are the Saviours: What the Resolute, Unafraid Presence of Muslim Women Tells Us

Leave aside other possible outcomes. If we see the anti-CAA movement as an act of self-representation by Muslim women, it is already successful, writes academician Ghazala Jamil 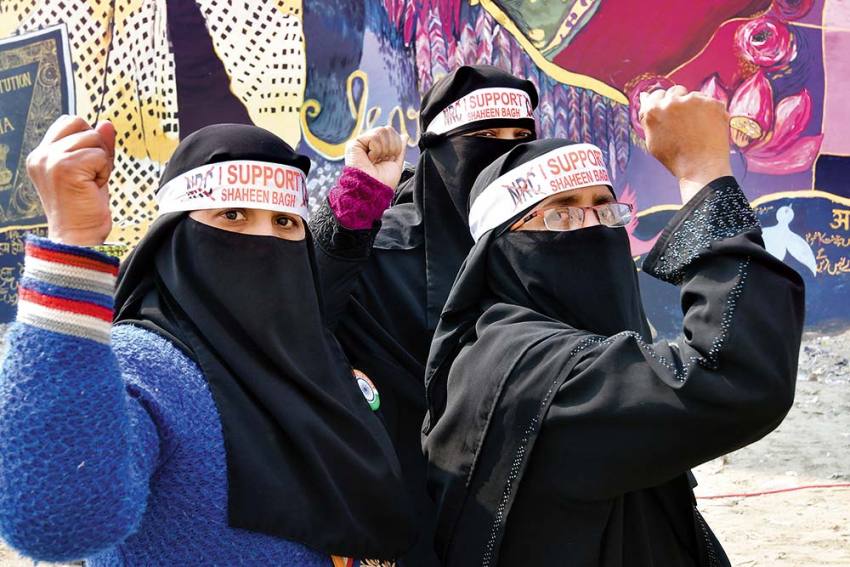 United They Stand
Muslim women have been at the forefront of anti-CAA/NRC protests, from Shaheen Bagh to...
Photograph by Tribhuvan Tiwari
Ghazala Jamil February 06, 2020 00:00 IST They Need No Saviours, They Are the Saviours: What the Resolute, Unafraid Presence of Muslim Women Tells Us 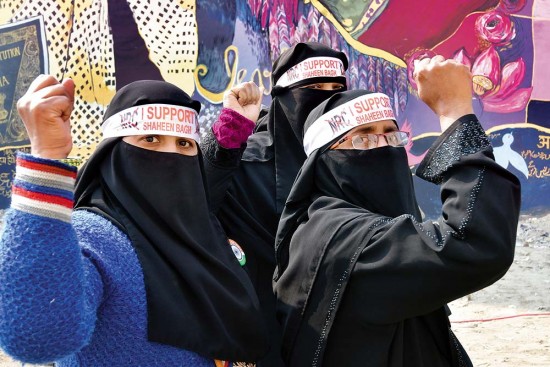 Many Indians would know what I mean when I say that, by the time I reached the last month of 2019, I had exhausted the energy to keep up with the news of spreading communalism (and ‘news’ that spread communalism). The widely prevalent references to Nazi Germany and concentration camps to discuss the ­impending statelessness of millions of Indian Muslims was disconcerting on many counts. Honestly, it was devastating to have to come to terms that a vast majority of Indians were so full of hate that they did not care if a section of their compatriots were disenfranchised or condemned to an even worse fate. Or to have to acc­ept that Indian Muslims were considered sitting ducks who could be dep­orted en masse to detention camps without a whimper—as a famously told chronology would have it.

But that’s when the protests began. It began the day the Citizenship (Amendment) Bill 2019 was passed in the Rajya Sabha—first, Jamia Millia Islamia (JMI), a central university in Delhi, spoke up. Women students marched out of their hostels, braving the rain and biting cold. Three of them—Ayesha Renna, Ladeeda Farzana and Chanda Yadav—were iconised in a frame, their fists raised in slogans. It was this defiant image that first caught the attention of students and multitudes of citizens across the country. They wanted their voices to travel far, said Ayesha and Ladeeda. It did.

The police crackdown came soon. First, on a citizen’s march called by students. Then, inexplicably, mayhem inside the Jamia campus, in the library and mosque, with studying and praying students brutalised. The images were stark and shocking. We heard of worse from Aligarh Muslim University and elsewhere in UP. (Later, as visuals streamed out after an internet shutdown, the police action there recalled the wanton terror of private militia—‘ghar mein ghus kar marenge’ was no longer an empty threat.)

Next day, another visual. One of hope this time. Anugya, a law student of JMI,  directly addressed (via TV journalists) the citizens who voted this government in and spoke, in a pained, empathetic voice, words that touched the nub of the issue: “How shall I study the Constitution now for my exam?” and “If injustice is done to my comrades, I shall stand by them”.

These Muslim women make it clear that they do not need ­saviours. ­Instead, they are the saviours.

Two days, two emblematic moments. Something was becoming clear ­already. It was the women students of Jamia—Muslims and otherwise—who were front and centre. Speaking to media, raising slogans, making placards, showing a deep resolve to represent themselves. It’s their voices and youthful idealism that “travelled far”.

It was truly a time to rejoice. Secularism was neither dead, nor dying ­anytime soon in India. For, those who stood up and spoke for it were, in a way, the ones least expected to do so: university students, a somewhat privileged set. To the surprise and delight of the older generation of civil liberties and human rights activists, post-millennials were not self-centred. They proved to be politically savvy and sharp-spoken. They cared for what is right and what is true. They cared for ideals. And it was infectious: they made abstract ideals like constitutional values and solidarity cool again.

Then, Shaheen Bagh showed another way to protest. As I write, scores of sit-INS by Muslim women are going on across India. There are so many Muslim women with ­articulate voices and a confident presence that it’s difficult to single out some among them as leaders. Their resolute, unafraid presence is providing a nucleus around which space is being created for others to protest against the discriminatory law and express solidarity. Their resoluteness is a source of solace to those sympathisers who have been afraid for Muslims, their confident assertion of identity a balm for young Muslims sick of the scaremongering about Islamic radicalism. And their slogans, universal: concern for students, universities, the future of democracy and the very idea of India.

Most of all, these women make it clear that they are in no need of saviours (The media, anyway, was behaving like lapdogs of the powerful rather than watchdogs of democracy). Instead, they are the saviours—samvidhan bachane nikle hein, as the slogan went. They question the ­motives of the government rhetoric of ‘saving Muslim sisters from triple talaq’. They bunk the majoritarian nationalism in which Muslims are ­excluded as outsiders. And they do all this through a passionate assertion of patriotism and inalienable sense of belonging to this land—is zameen mein hamare buzurg dafn hein, (our ancestors are buried in this land), is zameen pe hum har roz paanch waqt sajde karte hein (we prostrate five times every day on this land).

It would be a tragedy to ­revert to the framework where ­harmony depended on Muslims being ‘wisely’ silent.

They position Muslims as long-suffering, patient, model citizens who had not complained so far despite all kinds of harassment and targeting. They inspire and forge solidarities and represent all groupings of citizens who have experienced deficit in citizenship—workers’ unions, peasant organisations, Dalit activists etc. But most importantly, they also represent Muslim men—breaking the myth of Muslim men (and Islam) as their oppressors. In their articulations, they lay bare the fact that those on either side of the ‘rich/poor’ or ‘good/bad’ Muslim binaries are characterised by a differential yet shared experience of everyday prejudice and targeted violence.

If we consider the success Muslim women have had in creating an audience for their self-representation, then regardless of the outcomes of the protestor’s core demands, this movement is already successful, in the same way that Narmada Bachao Andolan may be considered successful in mainstreaming an environmentalist critique of top-down development. I feel we are in a moment when young people, especially young Muslim women, are clarifying and expressing what a deeper practice of secularism might entail. What others can do is listen carefully, reflect on their discomfort vis-a-vis these voices and be humble about their diagnoses and prescriptions.

We find ourselves in the middle of possibly a movement for equal citizenship—a broad-based movement whose core is largely comprised of Muslim women. None of the ‘experienced’ commentators, pundits and public ­intellectuals had foreseen how these events would unfold. Let them not pretend that they know what is best. The spontaneous movement against sexual violence around the Nirbhaya case quickly caved in to populist, patriarchal calls. So far, an insistence on equality, an aspiration for an honest practice of secularism and a ­demand to confront whipped up communalism and implicit Islamophobia are all alive in this movement. Would this movement also give in to the demands of mobilisation and let those take precedence over its crucial values?

That verdict has to wait. Yet, to be nervous at this moment about the ­expression of Muslim identity by protesters would be to deny Muslims a great historic opportunity to find their political voice as equal citizens of this country. This is the voice using which they too can complain that injustice has been done to them. It would be a great tragedy if we go back to the framework in which harmony and tolerance was dependent on Muslims being ‘wisely’ silent for the fear of causing ‘polarisation’, reduced to docile subjects who could only speak about the Shariah.

(The author is assistant professor at the Centre for the Study of Law and Governance, JNU. Views are personal.)

Why No Shaheen Bagh In Kashmir?