Centre’s proposals for single-point solutions to state subjects raise the Opposition’s hecklesThe BJP-led NDA government's plan to link ration cards with Aadhaar cards has raised a stink. In any case, food is a state subject and why is the Centre usurping that, asks the Opposition 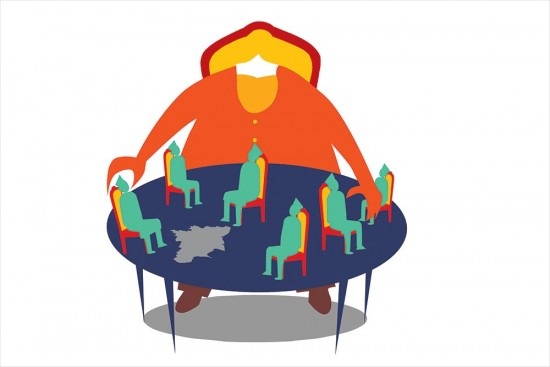 For Sabari, a 47-year-old Bhil tribal woman from Dahod in eastern Gujarat, her workplace for many years has been Ahm­edabad. A daily wage earner, she earns a meagre Rs 150 a day, struggling to sustain her five-member family. What she misses is the subsidised ration she is entitled to; back home, she just needs to visit the nearest fair price shop (FPS) with her ration card for her quota of wheat and rice. So, when the Centre ann­ounced a ‘one nation, one ration card’ scheme, Sabari was among millions of mig­rant workers who were delighted. The government says the scheme, proposed to be rolled out across India by June 2020, will enable poor people such as Sabari to enjoy the benefits of the national food security act anywhere in the country with a digitalised ration card linked to her Aadhaar number.

The scheme is, however, being seen by many—especially the political Opposition of the ruling BJP-led National Democratic Alliance (NDA)—as yet another attempt by the Centre to all­egedly tinker with the country’s federal structure, essentially by enc­­r­­oaching on and usurping state subjects. The proposal for simultaneous elections to the Lok Sabha and state assemblies, and the Union cabinet’s nod to a single tribunal for all water-related disputes among states are also seen in the same light by critics of the government. “Clearly, it’s an attack on the federal character of the country. Why would the central government infringe on state matters?” questions Kanimozhi, a DMK lawmaker from Tamil Nadu.