No One Killed 426 People: Why 1984 Anti-Sikh Rioters Will Never Be Punished

A Special Investigation Team has concluded that none of the 199 riot cases post-Indira Gandhi's assassination can be probed afresh. A callous judiciary and an incompetent Delhi Police played the spoilsport 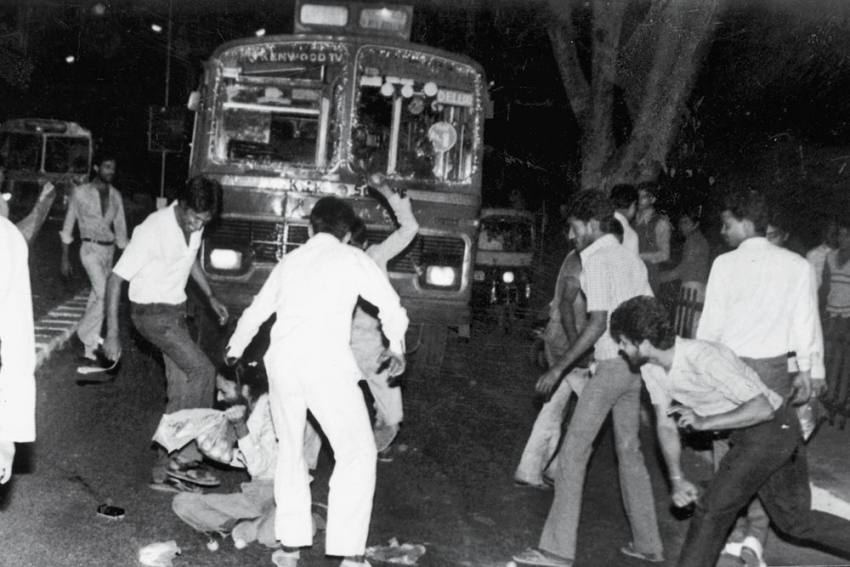 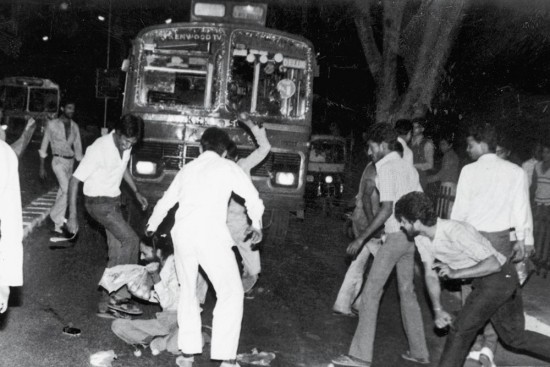 In January 2018, the Supreme Court ordered a special investigation team (SIT) to examine whether a batch of 199 cases linked to the 1984 anti-Sikh riots—which had been closed in 2015 for want of evidence—could be re-investigated. The list of cases included 54 complaints that collectively accounted for 426 murders. Earlier this month, the Centre informed the apex court that it received the SIT report in October last year and has decided to accept all recommendations made by Justice (retired) S.N. Dhingra and IPS officer Abhishek Dular.

In the midst of a vitriolic campaign for the Delhi polls, the news of the central government accepting the SIT recommendations should have made headlines, especially for the fact that 2,700 Sikhs were killed in the national capital alone in the aftermath of Indira Gandhi’s assassination on October 31, 1984. Yet, Gurlad Singh Kahlon, on whose plea the SIT was constituted, lawyers and activists fighting for justice for the survivors for the past 35 years and the headline-hungry media largely kept quiet. Barring Union minister Prakash Javadekar’s predictable criticism of the Congress party’s alleged role in the massacre, there was no political furore over the report either.

The deafening silence can possibly be explained by the fact that the Congress, the alleged architect of the riots, is no longer a contender for power in Delhi. If verbal duels over the anti-Sikh riots helped the BJP polarise a chunk of Delhi’s electorate against the Congress in the past, the Shaheen Bagh protests over the Citizenship (Amendment) Act (CAA) are serving that purpose for the BJP and the ruling Aam Aadmi Party (AAP) now—and in a much more magnified way than the 1984 massacre.

If the conclusion of the SIT is anything to go by, a callous judiciary and an inc­ompetent Delhi Police ensured that those responsible for murdering as many as 426 people during the riots will never be punished. The SIT has concluded that none of the 199 riot cases can be probed afresh.

The SIT report, a copy of which is with Outlook, says that the “lack of interest shown by the police and by the authorities in handling these cases” during the early stages and the manner in which judges “routinely” handed out acquittals to those accused of the riots made sure that “there is no possibility of further inv­estigation”. The report paints a nauseating picture of a police and judicial apparatus complicit in denying justice to the riot survivors. 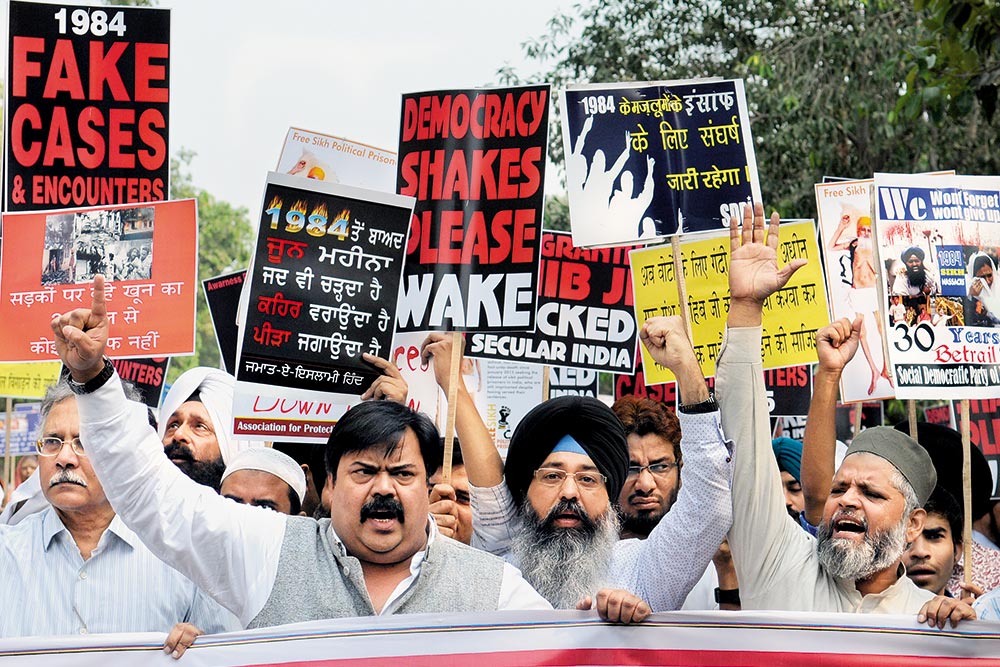 Ghost Of The Past

Survivors demanding justice for the 1984 anti-Sikh riots in Delhi.

Under the law, only three cases “of the same kind against the same person” can be clubbed together for trial but judges , S.S. Bal and J.B. Goel, who presided over the riots cases in the early years between 1989 and 1994 “did not give directions to the police to file separate incident-wise challans”. This was “a major reason of the failure of several trial court cases”, the SIT report notes.

FIR No. 478/84 was registered on the basis of a statement at the Kalyanpuri police station by riot survivor Indero Devi, a resident of Trilokpuri, whose son-in-law Balwant Singh was allegedly killed by a mob in front of her eyes. Devi had identified four people from the mob. However, the police refused to investigate her complaint on the ground that a complaint of rioting in the area had alr­eady been filed—FIR No. 426/84—which covered the murder of Balwant Singh, along with the murders of as many as 199 other Sikhs of the locality. This FIR clubbed the killing of 200 people across Trilokpuri into one complaint which also included charges against 107 acc­used for offences like rioting, arson, murder, assault on women, etc. The res­ult—a majority of the accused walked free, and only two of them were convicted of murder in other cases linked to the Trilokpuri riots.

FIR No. 315.84 was registered by Raj Mahinder Singh, then station house off­icer (SHO) of Alipur police station, against five people accused of burning 29 Sikhs alive at Gurudwara Hargobindsar near Mukarba Chowk. When the case went to trial, the five accused were acq­uitted by judge J.B. Goel, apparently for lack of evidence, though the police off­icer was an eyewitness to the killings.

The SIT has concluded that none of the 199 riot cases can be probed afresh.

The SIT report says the acquittal of the accused, despite “overwhelming evidence of Singh and his team members”, shows that the investigating officer and the prosecuting agency “were not interested in getting the culprits punished”.

At Kishan Ganj, Tughlakabad, Daya Basti and Shahdara railway stations, not a single suspect was arrested because the police were allegedly outnumbered by rioters. The accused were marked “unidentified” and, predictably, no one was arrested for murdering 57 Sikhs who were “dragged out... and were beaten to death and burnt”.

At the Nangloi railway station, the rep­ort says, police found 13 bodies but registered no FIR initially. “The statement of railway staff, as available on record, shows that when police reached the spot the rioters were still there…13 dead bodies of Sikhs in half-burnt condition” were recovered from the tracks by the platform. The SIT states that the police allegedly allowed the rioters to leave the station after the carnage and said in the FIR that the suspects were unidentified.

In an affidavit filed before the Mishra Commission in 1991, Kalyanpuri resident Ram Singh said he and some more residents who had lic­ensed firearm were trying to stop rioters from entering their locality on November 1, 1984.

SHO Survir Singh Tyagi came to the block along with some policemen and told the Sikhs to surrender their licensed weapons if they wanted police help. Tyagi, the rep­ort says, took away the weapons of the Sikhs and then all­egedly “made a gesture towards the mob to att­ack the Sikhs… the mob attacked the gur­dwara...looted and burnt it”.

Concluding that Tyagi deliberately all­owed Sikhs to “be made victims”, the SIT says “it is apparent that the rioters had his blessings”. Tyagi was initially suspended from the force for his alleged complicity in the riots but was reinstated and promoted later. The SIT has recommended that Tyagi’s case should be “ref­erred to the Special Riot Cell of Delhi Police for appropriate action”.

The SIT says that FIR No. 433.84, registered at Kalyanpuri police station, clubbed 56 instances of murder into one complaint. The trial court, instead of exe­rcising its discretion to order separation of trial for each of the murder cases, “framed charges only in respect of killing of five persons and no charge was framed for the remaining (51) murders”.

The report says it is “not known why charges were framed only for five murders… when the witness stated in court that she had seen the killings and can identify the culprits, the public prosecutor did not even ask her to identify the rio­ters out of several accused persons present in the court.

Cures For The Tropics