Aththi Varadhar is a six-feet tall idol of Lord Mahavishnu. Carved from the wood of fig tree, the idol is taken out once in 40 years for public viewing for just 48 days 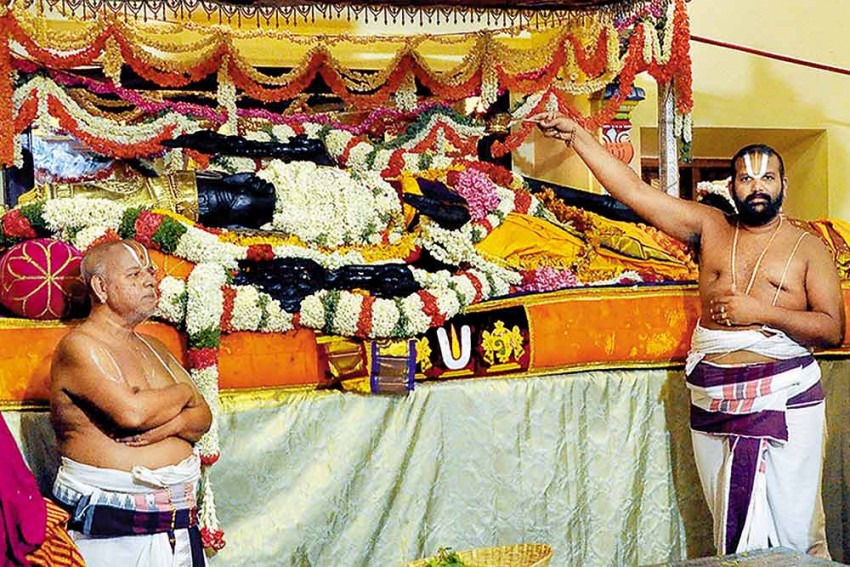 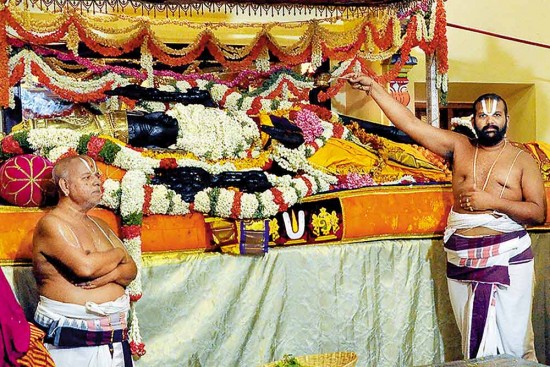 It was a homecoming without any parallel. After spending 40 years underwater, a deity is pulled out for public viewing for a limited period of 48 days. A few thousand devotees are expected for its ‘darshan’. Instead, at least a lakh turn up every day and in multiples of that during weekends. In the process, the silk town of Kanchipuram, 80 km from Chennai, is overflowing with humanity—all of them devotees of Lord Aththi Varadhar.

Made from the wood of Aththi (fig tree), the six-foot idol is immersed underwater in a small tank within the large temple tank of the Varadaraja Perumal Swamy temple and is bro­ught out once in four decades. According to a stone inscription, the present idol, which is 487 years old, had replaced an earlier one. But the tradition of its being immersed for 40 years, except for the brief period of 48 days, before returning to the temple tank, has been in vogue for a few centuries, say scholars. 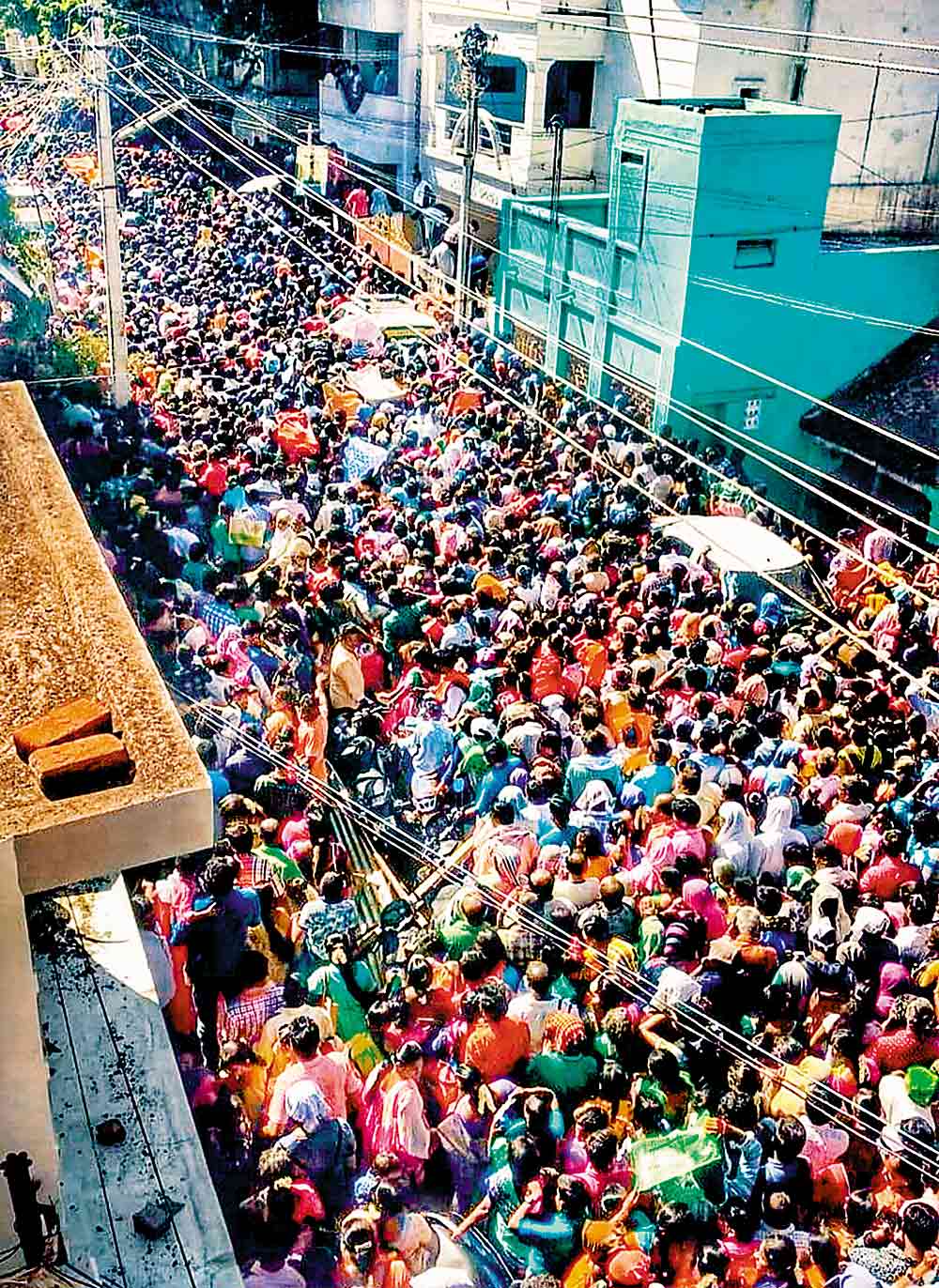 The throng of devotees cramming the roads

Photograph by A. Murugan

“The popular belief is that the idol was hidden in the tank to escape Muslim raiders from north during the 17th century. In that case, it should have been restored in the sanctum sanctorum after the threat disappeared. More logically, the wooden idol suffered some damage and could not be worshipped as per the Agama shastras and was replaced by a stone idol,” explains M.A. Venkatakrishnan, retired HoD, department of Vaishnavite studies, University of Madras.

However, the Aththi Varadhar’s reappearance this summer has gathered force to become an event studded with novelty, widespread curiosity and religious fervour. On July 1, when the deity was unveiled at the Varadaraja Perumal Temple, public reaction was unprecedented. Temple authorities were taken aback by the surge of devotees in the temple courtyard from early morning. The first two weeks were virtually an uncontrolled melee and devotees had to wait for hours before they caught a glimpse of the deity housed in a small hall. “In 1979 when this happened for the last time, the crowd never crossed 10,000 even on weekends,” recalls Raghavan, who stays near the temple.

Only after four people died in a stampede did authorities act. Unhappy with the district adm­inistration’s inability to manage the situation, the state’s chief secretary and DGP camped in Kanchipuram for two days, identifying weak spots, reinforcing crowd control measures and installing basic services like drinking water, sani­tation, medical support and transport. “During our preparatory meetings in May even the most optimistic estimate was 40,000 devotees during weekdays and twice that on weekends. Instead, from the first day, a lakh turned up. We were swamped,” discloses a district officer. 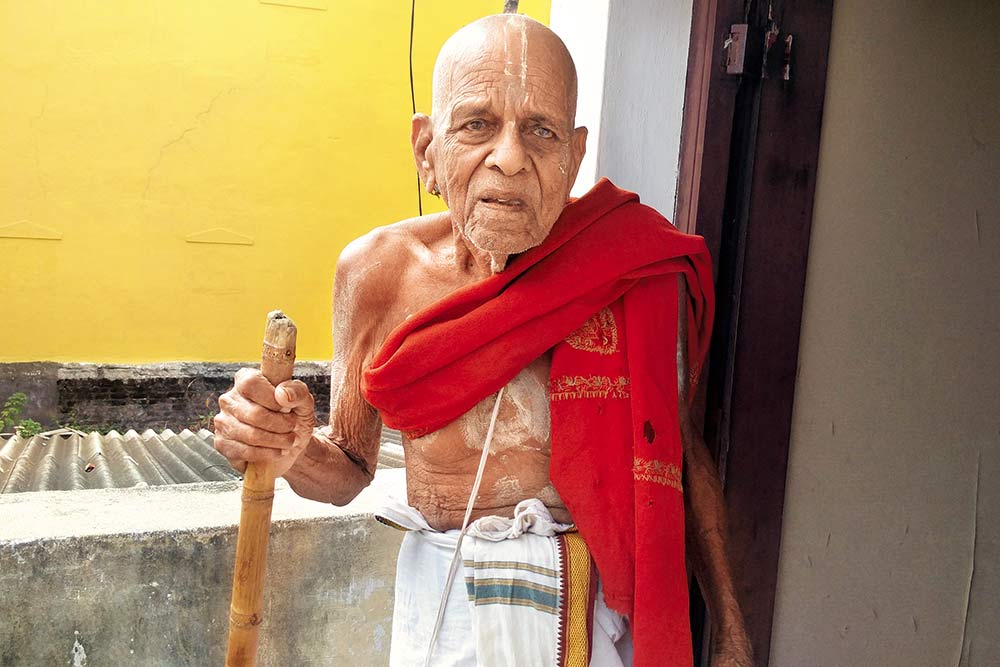 Varadhachar Bhattar, 92, a former headmaster, has seen three past editions and recalls it as a “village festival”.

“We were told that there was no mishap when crores turned up for the Kumbh Mela. But that is spread over a large area and the only event is taking a dip in the Ganga. Here, tens of thousands throng the temple entrance and worm their way into a small hall towards Aththi Varadhar. The temple may be large, but Kanchipuram town itself is small and has not seen a turnout like this before,” points out a senior police officer.

The trigger for the massive interest and the humongous invasion of devotees is also being attributed to the reach of social media. “Even two months before the event, social media was abuzz. Its unique history also urged devotees to decide to visit the temple. At least 200 of my friends settled abroad called me to make travel arrangements for them,” says Venkatakrishnan. True, other than devotees from Tamil Nadu, thousands travelled from Andhra Pradesh, Telangana and Karnataka by chartered buses to catch a glimpse of the ‘forty-year god.’

The great pull was, of course, in the belief that this was once-in-a-lifetime event: with just a 48-day window once in 40 years, it could not be missed, much like the sighting of Halley’s comet. For, not everyone could count on being so fortunate as Varadhachar Bhattar. The 92-year-old retired headmaster is probably the only person to have witnessed three editions of Aththi Varadhar. “My memory of the first event is vague; I was just twelve. But the 1979 event is still etched clearly. We could simply walk in and out of the temple. A few hundred people would come by trains, buses and bullock carts. It was more like a village festival, nothing like this. Travel has become easier, which is the reason behind these crowds,” he reasons.

The event was also a signifier of Tamil Nadu’s socio-religious leanings, and its separation from the electorate’s political convictions. Three months after Tamil Nadu rejected Hindutva politics, the feverish response to the Kanchipuram festival silenced once more the otherwise loud rationalists of the state. Many were embarrassed, too, after two women from late DMK (the Dravidian party is avowedly atheistic) leader Karunanidhi’s family—wife Rajathi Ammal and daughter-in-law Durga Sta­lin—turned up in Kanchipuram. “After Karu­nanidhi’s demise, the anti-god, anti-Hindu stand of the DMK stands diluted,” admits a former DMK minister, after a darshan at Kanchipuram.

With his ability to attract even non-believers, the demand for retaining Athithi Varadhar permanently only grew louder. “To attract so many devotees in such a short span of time, the deity must be endowed with enormous powers. We should not send him back into the tank and Instead keep him here to be worshipped by lakhs of others who have not been so fortunate. This could become another Tirupathi,” argues Kri­s­hna Premi, a noted Vaishnaviite preacher. Though he found support from a couple of ‘jeeyars’ (Vaishnavite head priests), the overwhelming view was that the tradition of many centuries should not be broken.

“If Aththi Varadhar remained outside he would become another idol in the temple where the main deity—Varadaraja Swamy—is the centre of all prayers and devotion. People would quickly lose interest in him, which has been kindled only by his rare appearance once in four decades. We should maintain that mystery for the next generation,” counters Venkatakrishnan.

By G.C. Shekhar in Kanchipuram