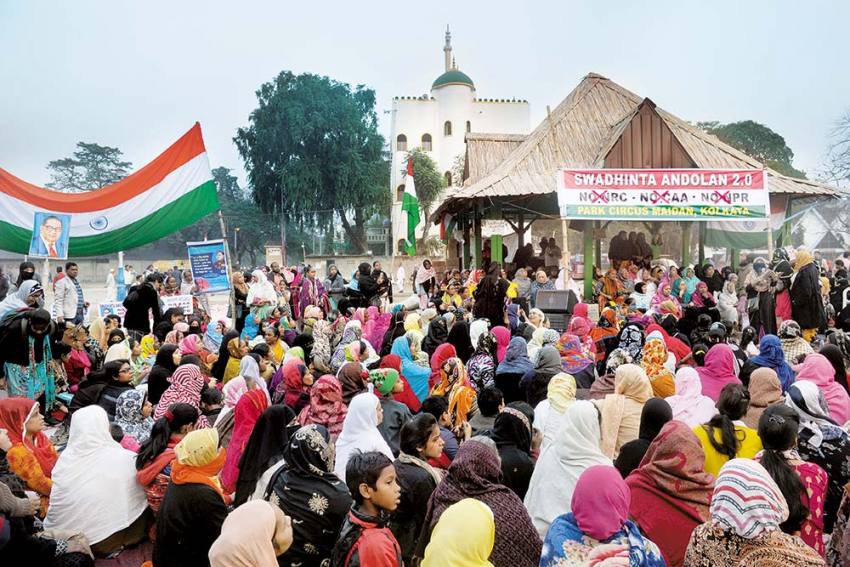 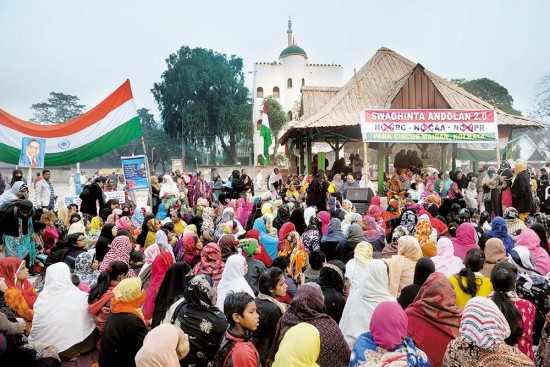 Sameeda Khatun was a regular at the sit-in at Park Circus, Calcutta, since the very first day—January 7. Until she passed away on February 2. The loudspeakers were switched off at the protest site the next day as a mark of respect to the 56-year-old. Protestors got together to offer financial support to her family, but the larger community, especially Hindus, did little to express solidarity with them. This is symbolic of a pattern in the ongoing movement against the Citizenship (Amendment) Act in West Bengal—Muslims, fearing further segregation and marginalisation, are leading the movement, but most Hindus are not joining them. “Why are there no such sit-INS in Jadavpur University and other Hindu-dominated places?” asks Sabir Ahmed, a researcher with Pratichi Institute. CPI(M) leader and Jadavpur University professor Partha Pratim Biswas says a sit-in at “Bansdroni or similar places in Calcutta and its suburbs where Hindu refugees reside would have gone a long way to bridge the gap between Muslims and Hindus in the movement”. The Hindu refugees, once supporters of the Left, are not responding to the call to mobilise against CAA. The TMC and the Congress too are organising marches and demonstrations, but those run parallel to the movement of ordinary citizens spearheaded by Muslims, who are more than 28 per cent of the population, with students and women at the frontline of street agitations across Bengal.

“We know Muslims would be against us, but we will surely win the support of the majority within the Hindu community,” says BJP state vice president Jayprakash Majumdar. BJP and RSS workers are campaigning door to door in Hindu-dominated areas of districts such as Murshidabad, Malda and Birbhum. “A few elite Hindus are with us and leading the protest in the district town, but mostly Muslims are participating in ­protests in rural Bengal,” says Tahedil Islam, leader of a small organisation campaigning against CAA in Murshi­dabad, a district with 66 per cent Muslim population.  In Malda, which is 51 per cent Muslim, the BJP is wooing adivasis and bahujan castes like the Rajbonshis. Last year, adivasi politician Khagen Murmu was elected from the Malda (North) Lok Sabha constituency after switching from the CPI(M) to the BJP.

“Muslims would be against us, but we will surely win the support of most Hindus,” says a top Bengal BJP leader.

On February 2, Dharma Prasar Bibhag, a wing of the Vishwa Hindu Parishad, ­organised a mass wedding for 133 adivasi couples—many already living as partners, some with grown-up children—with much fanfare in Malda. Protesting against what they saw as a cultural ­invasion, adivasi protestors ended up vandalising the yagna pandal before the police intervened. Mohan Hansda of the Jharkhand Disham Party said it was a ploy of the BJP and the VHP to convert adivasis to Hinduism. Adivasis are being encouraged to inculcate Hindu rituals—in the case of marriage, applying vermilion on the forehead of the bride and holding yagna. At the Malda mass ­wedding, the VHP also issued the ­couples a marriage certificate. A spokesman argued that people are looking for certificates in the post-CAA situation, and this would help them.

In Birbhum, the Bangla Sanskriti Mancha (BSM), a five-year-old citizens’ organisation, has managed to wean away a number of adivasis from the BJP camp. Some of the adivasi youth had been seen campaigning for the BJP during the 2019 elections. Adivasis, Dalits and Muslims are holding protest marches and rallies together. According to BSM president and college teacher Samirul Islam, they have also been partially successful in ­encouraging Hindus to join the protests. At meetings of small groups of Hindus and Muslims, they talk about why even Hindu refugees are not safe—that they would have to prove their citizenship with legacy certificates to figure on the National Register of Citizens. “This gets a positive response in some Hindu-majority areas,” says Samirul.