Home  »  Magazine  »  National  » Cover Stories  » Corona Warriors »  Meet The Corona Warriors: How Dr Rakesh Saini Is Up And Close With The Deadly COVID-19 In Jaipur

Meet The Corona Warriors: How Dr Rakesh Saini Is Up And Close With The Deadly COVID-19 In Jaipur

He wanted to be an IAS but life had other plans for him. After fighting malaria and dengue in Rajasthan villages, Rakesh Saini now has a bigger challenge 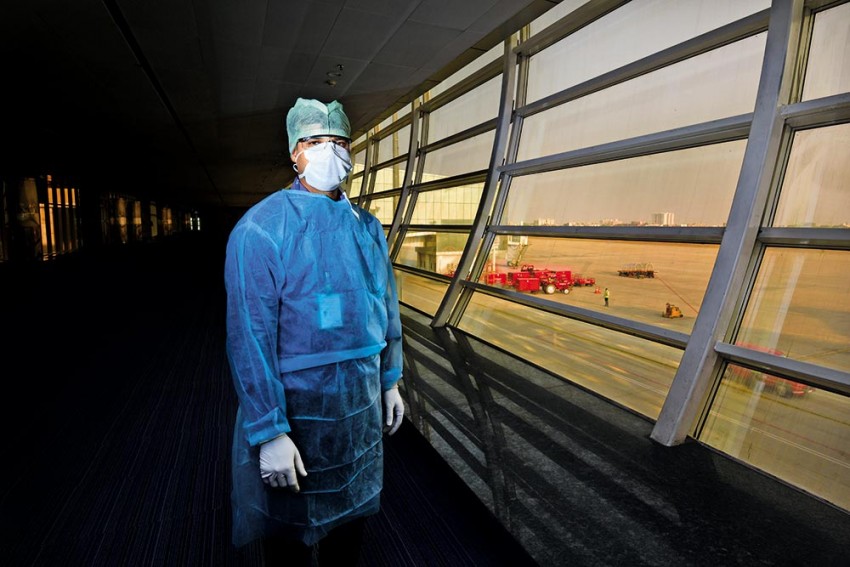 Photo by Tribhuvan Tiwari
Salik Ahmad March 19, 2020 00:00 IST Meet The Corona Warriors: How Dr Rakesh Saini Is Up And Close With The Deadly COVID-19 In Jaipur

It’s the golden hour and the airport lobby is gloriously sunlit. The colossal geometry of the roof and the planes appearing intermittently on the tarmac behind make Rakesh Saini’s new, hopefully temporary workplace appear very stately. Saini, 32, is a medical officer posted at a government hospital in Kotputli in Jaipur district. But since January 28, he has been employing his skills at the Jaipur airport. The outbreak of coronavirus has prompted authorities to set up a medical desk at the airport that screens passengers for symptoms.

Saini says that when the state health ­department decided to deploy doctors, he voluntarily enlisted himself. “The idea of being part of the team fighting this pandemic ­excited me,” says Saini. “While everybody is distant and away, we are fighting it up close.”

The medical desk at the airport has a team of five to six doctors. When passengers from an international flight arrive, they measure their body temperatures—fever is one of the symptoms. They enquire about other symptoms such as cough or running nose, their travel history and ask them to fill a self-declaration form. Passengers receive pamphlets with information on corona and a helpline number in case they develop symptoms later.

The symptoms might take up to 28 days, says Saini, so it’s not possible to screen passengers infallibly. Somebody who has popped a paracetamol pill can easily pass the thermal screening. In case a passenger shows symptoms, they are immediately quarantined and taken to one of the two hospitals in the district equipped to handle coronavirus patients and those suspected of harbouring the infection. If the person tests positive for the virus, the medical team screens the flight crew and traces all the passengers in the same row as well as those up to three rows ahead and behind.

When Saini’s family learned about his new assignment, they were predictably timorous. “The disease is dangerous, son. Be careful,” said his mother. The media reports only amplified her apprehensions. But Saini had a simple answer: “We can’t not do our duty.” He says they wear protective gear and religiously observe all precautions, so there is no reason to worry.

Saini was inspired by his elder sister, a medical practitioner, to pursue medicine. Having secured 11th rank in the state medical entrance exam, he did his MBBS from Jaipur. His stints in villages gave him great satisfaction. Beaming with pride, he recalls how he and others worked hard to prevent malaria and dengue in a village, after which there was significant improvement compared to previous years.

Often though, there were operational limitations, troubled by which, Saini decided to prepare for the civil services. “Being an IAS, you can go to the root of the problem,” he says. Saini attempted the exam five times and reached the final interview stage in four, but it was not meant to be. Having exhausted the permissible attempts in this life, Saini wants to be a civil servant in the next. But his role in the fight against coronavirus is still a very fulfilling one. “This disease can halt the entire ­nation. It is up to us to instill confidence in people,” he says.

Meet The Corona Warriors: From Handling Trauma Victims To COVID-19 Patients, Abdul Rehman Has Carried Them All

Meet The Corona Warriors: Indra Gupta, The Sarkari Doctor Aspiring To Keep Jaipur In The Pink Of Health

In Pics: Life In The Time Of Coronavirus

Down, Down, Down! Why Coronavirus Will Lockdown Indian Stock Market Indefinitely

By Salik Ahmad in Jaipur

Goliath The Germ: Where Does India Stand In Humankind's War Against Corona