Statue-building in post-colonial India has followed oppositional trajectories. While the State has tried to project Brahminical hegemony, the public has tried to reclaim the narrative.

Images in the public sphere are important markers that inscribe our memories all the time. In colonial India, many statues were installed in civic spaces to celebrate and project power over the native population, which got replaced after Independence. The public sphere was re-insc­ribed to celebrate the birth of a new nation. In the process, discourses in Ind­ia too got ghettoised to suit new elites and ruling political dispensations. Today, when one moves around Hussain Sagar in Hyderabad and Marina Beach in Chennai, the images are very prominent and offer a distinct visual culture and narration of the history of the respective regions.

Brahminical cultural nationalism has been the mainstay in India’s public sphere, and gets constantly represented through image-making and installation of statues in public spaces. There are two ubiquitous figures in the public sphere in almost every part of the country—Ambedkar and Gandhi. They had very different historical trajectories. While the Congress government was busy installing statues of Gandhi in every civic space, Ambedkarites constantly aired their opposition to such singular projection, and to the Brahminical cultural nationalism that started in colonial India and continued in post-colonial India. These two figures became the most dominant in the visuality of the urban and non-urban landscapes in the country. A proliferation of Gandhi statues is associated with the establishment of Congress governments in the local bodies from 1952 onwards. It is interesting to observe that mainly sculptors from Maharashtra like Sadashiv Sathe and later Ram Sutar, got engaged in the making of these Gandhi statues. There are many sculptors who were patronised by the Congress party to make statues of Gandhi in every civic space across India. Re-inscribing the image of Gandhi in the public sphere was pursued like a party dictum. Statues of many other Congress parliamentar­i­ans and leaders, who were, among other things, also opposed to Ambedkar’s Hindu Code Bill, were also erected in public. In short, the political dispensation constantly inscribed the statues of figures that were equally anti-women. Regional and local figures also got their share in public visuality, to mollify the demands of local populations.

Statues of Phule and Ambedkar, in contrast, have a different history. The first statues of Phule and Ambedkar were erected in Kolhapur in 1950, when, interestingly, Ambedkar was still alive. Both statues were conceptualised by the Maratha, Bhai Madhav Bagal, while sculptor Bala Chavhan was assigned to make the Ambedkar statue, and Baburao Painter the Phule statue. It was truly a public project, with Bhai Madhav Bagal collecting contributions from the public for both. According to Bala Cha­vhan’s grandson, Ambedkar had even visi­ted his grandfather’s studio for two sittings. The expressive quality of the portrait is unparalleled, and I feel captures Ambedkar’s persona. Later statues, made by Brahmesh Wagh depicting a standing Ambedkar with a raised index finger and holding a copy of the Constitution, evolved and inscribed his image in public memory. As Ambedkar was critical of Gandhi and Congress all his life, the caste-Hindu com­munity always nurtured anti-Ambedkar sentiments, resulting in conflict all the time. Images have iconographic significance, and by populating the public space with Gandhi and other caste-Hindu leaders as figures of the anti-British struggle, upper castes managed to consign important leaders from lower castes to secondary and tertiary status. In Maharashtra itself, there were many conflicts for a site to install images of Ambedkar. They were led by ruling political dispensations, and followers of Ambedkar had to fight and face opposition from all quarters. Similarly, annals of government history narrativised the idea of nation building as the Congress Freedom Struggle, erasing all others and making it a narrative of exclusions. Such a monologue by caste-Hindu communities has been instrumental in ghettoising and blind­folding public perception for a long time.

The projection of Phule and Ambedkar by their followers as the two figures who always represented transformation and empowerment of the oppressed, played an important role in evolving their respective images. Today, among political leaders, the largest number of public statues are of Ambedkar, and many of these are patronised by public subscription, not by political dispensations in power, unlike all other personas who are patronised by the government. Over time, Ambedkar as a symbol of transformation acquired a progressive status, while Gandhi and his ethos is now considered status quoist, or, as Ambedkar himself observed in his Gokhale Institute lecture in Pune in 1939, has been “returned to antiquity”. Followers of Ambedkar had to face the wrath of caste-Hindu communities, who began projecting Shivaji as Ambedkar’s counter. The caste allegiances of the warring factions can be interpreted from a scanning of news headlines that are full of cases of disfiguration of Ambedkar statues, but none of any caste-Hindu leader by Ambedkarites.

Amazingly, a large number of Ambedkar statues, mostly cast in concrete, can be fou­nd in rural India. No matter how similar it looks to the historical figure, the statue with a large forehead, wearing a thick spectacle and a westernised coat has got identified with Ambedkar. It can be said that in 20th century India, such standardisation of iconography has happened only with Ambedkar. The crystallisation of this iconography can be read in recent events, when Ambedkarites in UP repainted the colour of the clothes on Ambedkar statues in blue, after they were coloured saffron by the ruling dispensation. 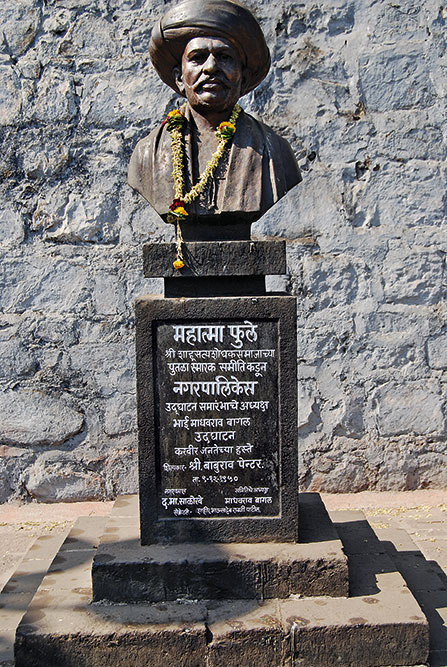 No other political figure—be it of Congress or other par­ties­—­could achieve the cult-like status of Phule and Ambedkar. That statues of these other figures were State sponsored, consigned them to pigeonholes in public memory. Meanwhile, all oppressed communities have drawn messages of political agency, constitutional democracy and equal rights from the image of B.R. Ambedkar.

With the rise of the All India Back­ward and Minority Communities Employee Federation (BAMCEF), there have been explorations in excavating the history of these communities, and they were gradually brought to the forefront. Thus, many figures of human rights struggles and anti-caste figures such as Shivaji, Shahuji Maha­­raj, Periyar, Kabir, Ravidas, Birsa Munda, etc. were added to the public discourse.

The first state project of installation of sta­­t­ues of social revolutionary figures of anti-­caste struggles was conceptualised by the Bahujan Samaj Party in Uttar Pradesh under the leadership of Mayawati in 1995, with the construction of the Ambedkar Memorial Park in Lucknow. Later, the image of BSP founder Kanshi Ram was added to the constellation of forgotten social revolutionaries. He is addressed as Manyavar—an epithet showered by the public as a constant reminder of his relentless struggle to build a political movement. The eventual addition of Maya­wati’s fig­ure outside Lucknow’s Ambedkar Memorial Park, though, attracted widespread criticism.

In a country like India, where a culture of defamation governs the public psy­che, the emergence of images of filmstars and politicians in temples and public spaces is no surprise. The public gaze is always sought to be directed tow­ards blind beliefs and to bolster a mythic culture. The tallest statue of Sardar Patel, named Statue of Unity, became PM Narendra Modi’s pet project, to re-convey the lost power of Sardar Patel, despite the fact that Patel was opposed to making universal franchise a fundamental right and had refused to incorporate it in the Draft Constitution. The much touted dimensions of the statue are meant to project brute political power and adherence to a mythical greatness of tradition—a perfect example of redesigning Brahminical cultural nationalism. Interestingly, Ram Sutar was hired as sculptor for both State projects—Lucknow’s Ambedkar Park and Gujarat’s Statue of Unity.

(This appeared in the print edition as "Marmoreal Projections")