The decision of some farmer groups to take the electoral plunge in Punjab has queered the pitch for AAP, and left other farmer groups disappointed

More from Mandeep Punia
View All

On January 11, Balbir Singh Rajewal, one of the key leaders of the recent farmers’ movement, wore a light blue turban to the inauguration ceremony of the district office of Samyukt Samaj Morcha (SSM), his newly formed party, in Punjab’s Mohali. There was applause as the ribbon outside the door was cut. Standing next to him, ano­ther farm leader, Prem Singh Bhangu, fed Rajewal a sweetmeat as per tradition. Sweets were then distributed among those who had congregated, including several leaders active in the Samyukt Kisan Morcha (SKM) that led the recently withdrawn farmers’ protest, who had come together to form the new party.

After formalities, Rajewal told the reporters present: “We will fight elections with the name Samyukt Samaj Morcha only in 117 assembly seats of Punjab. Our aim is to transform Punjab’s pathetic political scenario. Anyone who wants to contest the polls from our party should submit their resume to our office. We already have a large list of aspirants. We will soon finalise names and release the list of candidates.”

Ramandeep Singh Mann, considered close to Rajewal, told this reporter: “Discussions on the way forward had begun on the very day Narendra Modi announced the withdrawal of the three farm laws. Rajewal had started meeting leaders of the Aam Aadmi Party by the last week of November. AAP told him to convince all farm leaders to contest elections on its symbol. At the same time, he started talking with other farm union leaders. By the time the movement was over, 22 out of the 32 farm unions had agreed to enter the fray under Rajewal’s leadership.”

Rajewal skirted the question of their failure to reach an agreement with AAP by claiming that AAP had sold tickets, and given tickets to corrupt candidates. But Ramandeep had a different tale to tell: “When discussions with AAP began, Rajewal had asked for 60 seats. In December, the party was ready for this, but they changed their stance by January, and started releasing their own list of candidates for Punjab without discussing it with Rajewal. The last meeting between Rajewal and AAP took place in the first week of January, in which the latter offered only 10 seats to the farm leaders. After this, farmers decided to go it alone.”

On January 12, the very next day after Rajewal’s event in Mohali, Delhi chief minister and AAP national convenor Arvind Kejriwal also reached Mohali for a door-to-door campaign in the Kharar area. When asked about the failure to reach an agreement with farm leaders, he cited a similar reason to the one given by Ramandeep. 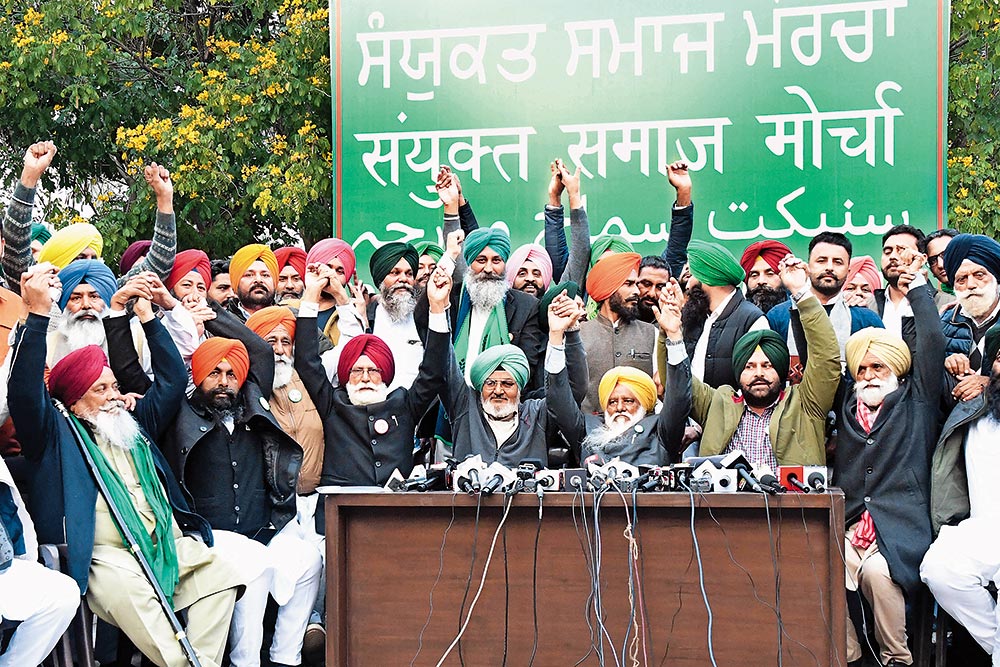 “We could not form an alliance with SSM as Rajewal had asked for 60 seats. We had already declared candidates for 90 seats by that time. We offered him 10-15 seats, but he did not agree,” Kejriwal said.

Less than a month remains before the Punjab elections, set to be held on February 20. The SSM is yet to receive an election symbol. Professor Manjeet Singh of the SSM, who is playing a key role in party formation, said in this regard: “We have applied for a symbol and it should be allotted in 5-7 days. We’re also setting up a party structure, having formed three committees, apart from a scrutiny committee to shortlist candidates, a parliamentary board and a manifesto committee. Around 1,700 people have applied for assembly tickets. We have already released the names of 30 candidates.”

College professor Anuroop Sandhu is one of the ticket aspirants for the Sri Muktsar Sahib seat. She told this reporter: “I have prepared data on farmers who were martyred during the movement and released a report titled The Human Cost of Farmers’ Protest. While working on this, I felt it was the legislators’ obstinacy that took so many farmers’ lives, as we were forced to sit on roads for an entire year. I want to contest elections so that we don’t have to come out on the roads again. Many people like me have seen the cruel side of State power during this movement. We want to change it now.”

On the other hand, journalist Manpreet Singh, who covered the farmers’ protests from Day 1, has a different take on the activists joining electoral politics. He said, “This is like a decision taken in the last hour of a sports match, and appears hurried. The party has not even been registered and a symbol is yet to be allotted, but they have started distributing tickets. They claim their candidate selection is different from established parties, yet they have given tickets to some who could not get one from AAP or other parties.”

This is not the first time activists from a mass movement have decided to enter the poll fray. Leaders who emerged out of the Naxal movement, Narmada Bachao Andolan, CPI-ML (Lib­e­ration), the Anna Hazare-led anti-corruption movement and others, have chosen to contest elections in the past. It is yet to be seen how eff­ective the intervention of farm leaders impacts Punjab politics.

Professor Ashutosh Kumar, who teaches political science at Panjab University, tackles this question: “I think farmers entering the fray would damage AAP’s prospects to some extent, but they would not have a major impact on the elections. Although if you look at data from previous elections in Punjab, on many seats, the margin of victory is between 1,000-5,000 votes, so if they (farmers) attract even this much votes, they could mess up equations of many parties. AAP sees them as a threat. That’s why Kejriwal wanted to reach an agreement with them, but it was a no-go from the beginning because of how many seats the farmers had asked for. There is a difference between leading a movement and fighting elections. A movement can be established with a good campaign, but a similar campaign may not necessarily result in an electoral victory.”

Ashutosh sees SSM having an impact on the rural vote, which had shifted towards AAP after incidents of sacrilege against Sikh religious symbols in 2015. This is why the party is aggressively raising the issue. AAP Punjab election in-charge Raghav Chadha alleged that a recent decision by the Election Commission was taken under pressure from the BJP-led central government. Chadha said: “The period required to register a political party has been reduced from 30 to seven days. This will help SSM register itself as a political party. It is an attempt to divide our voters.”

Meanwhile, other members of SKM’s nine-member coordination committee—in which Rajewal was also a member—have distanced themselves from Rajewal’s SSM experiment, citing objections over the party choosing a name similar to SKM and even using the platform’s name. At a meeting held on January 15, the SKM expelled all farm unions and organisations that have decided to take part in the electoral process.

Punjab’s largest farmers’ group, Bharatiya Kisan Union (Ekta-Ugrahan), a member of the SKM coordination committee, is one of the 10 members who have decided not to contest the polls. Its president Joginder Singh Ugrahan said, “All farmers’ groups participating in the movement had already been told that they can’t use this platform for any political purpose. The unions which decided to fight elections have been expelled from the SKM.”

(This appeared in the print edition as "Farming the Ballot")

Mandeep Punia is an independent journalist