Ailing ex-CM Lalu Yadav’s ‘insult’ of Congress leader Bhakta Charan Das turns into a row amid signs of realignment of foes and allies in Bihar.

What’s in a word in politics? A lot, if it has the potential to drive a wedge between long-standing allies and wreck their coalition beyond redemption.

A not-so-innocuous Bihari term, ‘bhakchonhar’ used by Rashtriya Janata Dal president Lalu Prasad Yadav for senior Congress leader Bhakta Charan Das appears to have done more damage to the Mahagathbandhan than their decision to contest the upcoming by-elections for two assembly seats against each other in Bihar.

On the day of Lalu’s return from Delhi to Patna for the first time in about three-and-a-half years on October 24, the RJD president brushed aside Das, currently in-charge of Congress affairs in Bihar, as a ‘bhakchonhar’ in response to a repor­ter’s query on the former Union minister’s rep­orted allegation about a behind-the-scenes ‘deal’ between RJD and the BJP. “Who is saying that?” Lalu retorted angrily.  When he was told about it, he used a seemingly offensive adjective usually used in the Bihari lingo to denote an unintelligent person who is unable to see things clearly.

On his part, Das—a widely respected Dalit leader from Odisha—took the insult on the chin, saying he would continue to hold Lalu in high est­eem. But it left his party leaders fuming. ­For­mer Bihar Pradesh Congress Committee president Anil Sharma wondered if Lalu was born to insult Dalits, from former chief ministers such as the late Ram Sundar Das and Jitan Ram Manjhi to a leader with a socialist background like Das. A visibly upset former Lok Sabha Spe­a­ker Meira Kumar went to the extent of calling it a case of violation of the Prevention of SC/ST Atrocities Act. “Bhakta Charan Das ji has forgiven him (Lalu), but it is painful to hear such insulting remarks coming from a senior leader from Bihar,” she said.

Referring to Lalu’s remarks without naming him, Bihar chief minister Nitish Kumar said such words (bhakchonhar) are used merely to gain publicity. Hindustani Awam Morcha-Secu­lar chief Jitan Ram Manjhi interpreted it as a veritable insult to the entire Dalit community. “Why do you hate Dalits so much?” he asked Lalu.

BJP’s Rajya Sabha MP Sushil Kumar Modi, however, took a pot shot at the Congress, saying the party would continue to be Lalu’s ally regardless of the humiliation meted out to its senior party leader by him.

The RJD promptly got into the damage-control mode by spelling out the meaning of the ‘typical Bihari word to those who do not know it’. “Let us enhance their knowledge. It means ‘absent-minded’ and ‘saddish’,” it tweeted.

But political circles, media, and social media had a field day trying to explain the meaning of bhakchonhar in their own way. Some asserted that it means imprudent, while others claimed that it is used for a ‘stupid person’. Veteran RJD leader Shivanand Tiwari, himself a Bhojpuri speaker like Lalu, defended his party chief.  “There is an uproar over the use of Bhojpuri word bhakchonhar as if it is a filthy abuse,” says Tiwari. “It is a flagrant distortion of its meaning. As someone who loves Bhojpuri, I think it is an insult to the language.”

However, Lalu—whose return has enthused party supporters across the state—could not care less about all the brouhaha around him. He busied himself with two pressing engagements on hand that needed his immediate attention in Bihar: ensuring the party’s victory in the by-elections and forging a patch-up between his warring sons, Tejashwi and Tej Pratap Yadav.

In spite of his poor health, Lalu is expected to campaign for RJD candidates in the by-elections. Alongside, he has to counsel his elder son, Tej Pratap, who has turned a rebel against Tejashwi, allegedly for being ignored. He has long been dem­anding the removal of the RJD’s state president Jagdanand Singh, a trusted ally of Lalu for decades, but Tejashwi has ignored his repeated pleas and even kept his elder brother out of the list of star campaigners for the bypolls.

For the record, the RJD and the Congress have been long-term allies in the grand alliance and had contested the assembly elections together last year. But their alliance has been torn asunder now, with the parties locking horns by fielding their candidates in the by-elections for the Kusheshwarsthan and Tarapur seats. In November 2020 state polls, RJD had contested from Tarapur and left Kusheshwarsthan for the Congress, but both had lost. 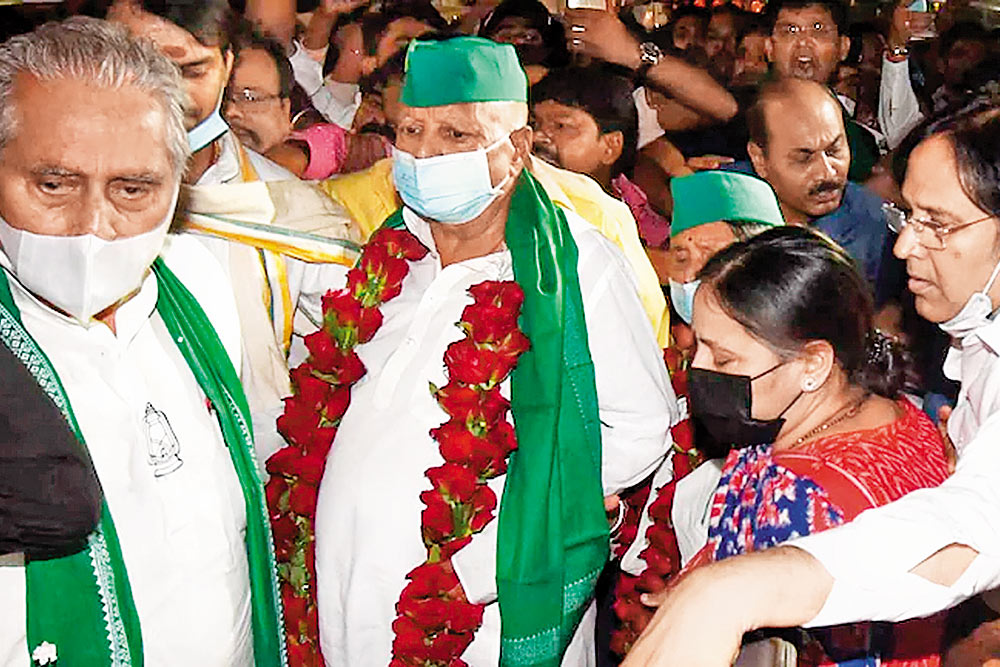 This time around, the RJD simply refused to spare the Kusheshwarsthan seat in the Darbhanga district for the Congress, which has been a traditional seat of its ally. Peeved at the RJD’s decision, Das not only announced that his party would contest from all 40 seats in Bihar in the next Lok Sabha elections, but also accused the RJD of colluding with the BJP. “Why has RJD not said anything against the BJP so far?” he asked.

In response, Lalu not only used the word ‘bhakchonhar’ for Das but also said that his party could not have given the seat to the Congress for forfeiting the security deposit in the polls.

Political analysts estimate that Lalu has chosen to deny Congress its traditional seat primarily bec­ause of its poor strike rate in the last elections. In the 2020 assembly elections, the RJD had given 70 seats out of a total of 243 to Congress, but it could win in only 19. The RJD apparently feels that the poor showing of the Congress kept it away from power in the keenly-contested polls against the Nitish Kumar-led NDA.

The RJD also thinks that it can go it alone in the polls because of the increasing popularity of Tejashwi. Besides, the party appears to be wary of former JNUSU president Kanhaiya Kumar’s entry into the Congress. Kanhaiya shares a good equation with Nitish but has had a strained rel­ationship with Tejashwi in the past.

The Congress, on the other hand, suspects that Lalu may well have struck a deal with the BJP to make Tejashwi the next chief minister. Thanks to the uneasy relationship that Nitish has had with the BJP lately, speculations are already rife that Nitish might contest the next election by keeping equidistance from both the BJP and the RJD and joining forces with the Congress, the Left, and other secular parties. 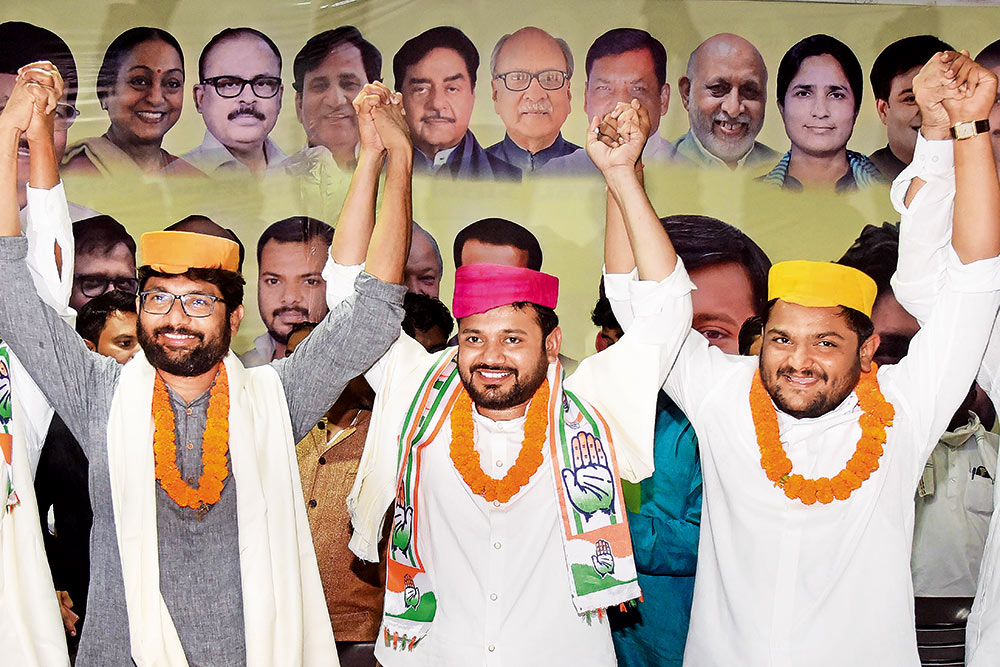 The BJP, however, continues to term these speculations as pure fiction. Senior BJP leader Sushil Kumar Modi says Lalu Prasad is a ‘living icon’ of prolonged misrule, mass exodus and corruption in Bihar. “The RJD had even removed Lalu from its posters in the last assembly elections,” he tweeted. “Now, he will only remind the public of the horrific times of massacres, kidnappings, robberies, scams under his past rule in Bihar.”

The former deputy chief minister says that Lalu’s remarks on Congress’s state in-charge are a direct insult to the leadership of Sonia Gandhi and Rahul Gandhi. “If Congress has the guts, then Sonia Gandhi should announce snapping of ties with RJD in view of Lalu’s remarks on the party’s Dalit leader Bhakta Charan Das,” he said.

But neither the RJD nor the Congress seems to be in a hurry to formalise it nationally. In fact, some NDA leaders suspect that Congress candidates have been fielded from both the seats just to create confusion about their alliance and divide the votes of opponents. Once the bypolls are over, the parties will be together again, they contend.

Political observers, however, believe that Congress now wants to revive its fortunes in Bihar with the entry of a firebrand youth leader such as Kanhaiya Kumar. Recently, Congressmen gave a rousing reception to Kanhaiya when he came to Bihar along with two other youth leaders of the party, Hardik Patel and Jignesh Mevani, both from Gujarat, to root for the party.

The grand old party, which has functioned alm­ost like a rudderless ship with the frequent reshuffle of the state presidents since it lost power in 1990, has not had any leader in its ranks to match the stature of Nitish and Lalu over the past 30 years or so. Now, Congressmen see a glimmer of hope in Kanhaiya, who quit CPI to join their party. But the RJD is not impressed. “Kanhaiya Kumar will prove to be another Navjot Singh Sidhu for Congress, who will destroy the party further, ins­tead of saving it,” says Shivanand Tiwari.

The RJD, as a matter of fact, has never been enamoured of Kanhaiya. In the 2019 Lok Sabha polls, Lalu’s party had declined to desist from fielding its candidate from Begusarai, where Kanhaiya was pitted against BJP’s Union minister Giriraj Singh, who subsequently won by a huge margin in the triangular contest.

Political pundits believe that the RJD still does not want to create any ‘competition’ for Tejashwi by propping up a youth leader like Kanhaiya within the alliance. The BJP also thinks that RJD is nervous about the way the Congress is trying to come out of its shadow. “RJD is overcautious now, as Kanhiaya has joined Congress,” Bihar BJP spokesman Nikhil Anand says.

Whatever the case, the fate of the Mahagathanbandhan seems to hinge on the outcome of the by-polls, which may well also have a bearing on politics beyond the borders of Bihar in the run-up to the 2024 general elections.

(This appeared in the print edition as "Headman, Chieftain And Sparks")