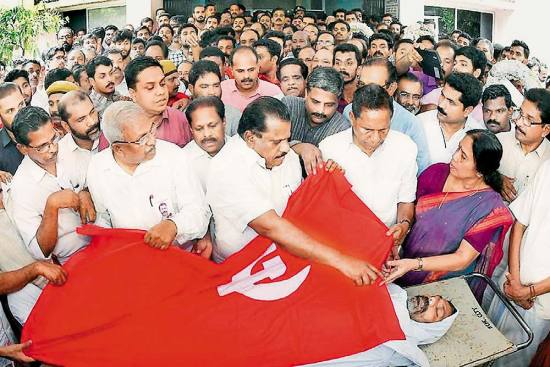 There have been numerous works about endemic political violence in Kerala’s Kannur district over the past 50 years. The more accomplished of these studies, such as by sociologist Ruchi Chaturvedi, are backed by years of field work. There is even a book-length treatment of the subject by journalist Ullekh N.P. While the works offer a wealth of detail, none really provides a satisfying explanation of why the violence persists to this day. For most part, they end up counting the number of the dead and the injured, recounting the heroism of the protagonists, or generally mourning the flaws of party politics in a ­democracy—as if the reasons for the perpetuation of the violence are to be found outside the framework of the ­violence itself. Many end up tracing its roots to exotic sources such as the ­region’s 18th-century martial folk ­ballads, pointing to the warrior culture these depicted, where it’s not ­uncommon to see vengeful individuals perpetrating extraordinary violence for seemingly insignificant reasons.

At the root of this confusion lies a simple fact: none attempt to define the word ‘violence’ specifically as it relates to the Kannur incidents. For them, violence is an abstract entity like intelligence, God or pleasure, even though it takes place here mostly between RSS and CPI(M) cadre, and its nature can be ­delineated in concrete terms.

Based on an ethnographic study of the most intensely affected spots, the following framework identifies the types of violence in this region in ­concrete terms, to arrive at a clearer understanding of this phenomenon: (1) planned initial attack, (2) unplan­ned initial attack, (3) planned retribution, (4) unplanned retribution, (5) skirmishes that last, (6) skirmishes that don’t last, and (7) ‘retaliatory riot’—created by occasional aggravation of types (3) and (4), it usually happens when the victim belongs to a minority community and is wealthier than the perpetrators.  Most studies have ­analysed only types (1) or (2), and largely free of spatial and geographical aspects of the violence, rendering them as incidents that could have ­happened anywhere. This narrow conception of violence limits the scope of these analyses to the particular time period of the incident and its immediate history. As a result, the incidents don’t always connect with each other, thus obscuring the temporal and structural aspects of the violence.

Any individual from a CPI(M) or an RSS ­pocket or bastion is seen as a CPI(M) worker or an RSS man.

To grasp the structure and nature of violence here in the past 50 years, one must study all the types of violence as well as their relation to one ­another. For this analysis, I identify a ‘region’ in Kannur where most of the violence has been confined, and divide it into into ‘areas’ (of approximately 10 sq km), and further into ‘pockets’ (of, say, 1 sq km, where one or the other organisation dominates). In these pockets, social life is virtually indistinguishable from political life, and a particular organisation has the last word in almost any matter, including those traditionally deemed to be outside the political domain, and regarded as social and personal.

In each pocket, the organisation nurtures a group of youngsters—usually five or six—who could engage in violence of types (1) to (7) on its behalf. However, a pocket is still vulnerable to attack, especially if it exists in isolation—a group of outsiders from the rival organisation can execute an attack and get away.

If a particular area has more than one pocket and situated adjacent to each other, then they form a ‘bastion’—a stronghold that is impossible for the rival organisation to ­attack, or even enter. The party colours and symbols are visible everywhere—on road ­surfaces, electric posts and walls. Prominen­tly displayed boards carry messages such as ‘Welcome to the Red Fort’ or ‘Welcome to the Saffron Soil’. Bastions serve as ‘base camps’ for acts of ­violence in the entire region as they allow for all kinds of enabling activities—from production of country bombs to hiding of culprits after an attack.

In most areas, workers of rival organisations live in close proximity to each other. There are a few workers of the rival outfit in every pocket, but they mostly remain passive. Violence of any type in one pocket or bastion triggers a chain reaction across the whole area, and sometimes to adjacent areas. If a CPI(M) worker is attacked in an RSS pocket or bastion (where no violence was reported before), then RSS workers in an adjacent CPI(M) pocket or bastion could expect an attack by CPI(M) cadre.

If violence is understood in such concrete terms, it allows one to shift the discussion from the sensational brutality displayed in a particular ­incident to the real impact of ­violence on people’s lives—to questions such as how many families in a village ward have been permanently caught in the trail of violence through innumerable police cases, how many of their breadwinners have been imprisoned for years, how the interests of the families of both victims and perpetrators have ­become subordinate to that of the organisations they are affiliated with, and so on. For example, type (7) tends to create homelessness for a section of people, while types (1) and (3) create dependencies among ­families of both victims and perpetrators to the organisations they are affiliated with—usually because it is expensive and time-consuming for families that have just had a breadwinner murdered or imprisoned to pursue a criminal case.

If ­organisations stop protecting their workers who ­engage in ­violence, it will be reduced to a fraction.

Before we ask why such violence ­recurs in Kannur, we should ask how it occurs. One can observe segregated organisational affinities at play across the areas where violence occurs. Besides the geographical dynamic, ­individual identity also plays a key role. Any individual from a pocket or bastion of, say, CPI(M) is automatically viewed as a CPI(M) worker, while a person from an RSS pocket or bastion is vie­wed as an RSS man. This reinforces efforts of the organisations to impose a single identity—of organisational affiliation—on members and their strongholds to the exclusion of other identities. This dynamic operates behind the killings of people with no ser­i­ous political affiliation simply because they belonged to a particular pocket or bastion. Such branding of people and places not only allows ­attac­kers to easily mark their victims, but also enables violence structurally. Thus, if the administration wishes to solve the issue, it has to remove all org­anisational markings from walls, electric posts, bridges etc in these areas.

Most violence in Kannur can be called ‘political violence’ only to the ­extent political parties have supported the culprits. Groups of youngsters in a pocket or bastion are ready to engage in violence because they know the party/sangh will protect them, fight their cases and bail them out. In cases where the higher rungs of leadership come to know of an act only after it is done—properly called ‘group thuggery’ in the name of politics—the ­responsibility is ultimately taken up by the organisation as a close relationship exists between such groups and the local leadership. Most such cases are personally motivated. The moment organisations stop protecting their workers who engage in ­violence, the violence will reduce to a fraction. Needless to say, such equilibrium can be sustained only if the police enquiries are impartial, with no interference by the ­ruling party. The frequency of violence has reduced in the past four years or so, also ­because the CPI(M)-led state government made it clear to both sides that they cannot get away with it. These four years of relative peace indirectly reveal the overwhelming role of ­governments in encouraging or curbing violence.

Finally, anyone seeking a solution to the violence in Kannur must note that its apparatus and mechanisms permeate every layer of society. They form an admixture of state politics, grassroots family feuds and the ­pervasive balkanisation that stretches from local PTA meetings and ­temple committees to even jail cells. If any layer of the problem is ­neglected while dealing with it, the results would be partial and ­unful­filling. The real solution to Kannur violence therefore needs efforts from everybody in civil society and an open acknowledgement of past mistakes by all parties involved.

(This appeared in the print edition as "Structures of Violence")

The author, a kannur native, ­researches economic systems at the university of hyderabad